Pearl Coleman was born on November 12, 1922 in Osborne, N.C. She later moved and settled in Newark and began working at St. Benedict’s Prep as the Administrative Assistant to Headmaster Fr. Edwin Leahy, O.S.B. ’63. 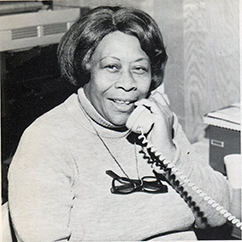 Pearl Coleman’s life impacted St. Benedict’s Prep in many ways, but she is mostly remembered for giving her honest opinion when it came to certain matters, making sure everyone in the school was doing their assigned role and she kept the day moving smoothly with an uplifting spirit. Mrs. Coleman guarded the 520 front door with her life, and made sure students and staff were always safe.

Pearl Coleman was not only a mother to her son, but to generations of SBP students and staff members. She was not very wealthy or famous, but rather a simple woman who was strong-minded and vivacious until the end of her days. She was the rock of the school for many years. She performed her duties to the highest standards, whether it was collecting tuition or serving as a security guard. No one got in or out of the school without Mrs. Pearl Coleman’s permission. Overall, Mrs. Coleman was a “tough cookie” who loved Popeye’s chicken, honey buns, and orange soda.

Mrs. Coleman impacted the lives of so many people through her loving nature and beautiful spirit. It is with great honor that we celebrate her legacy with “The Pearl Coleman Group” of St. Benedict’s Prep - Girls Prep Division.

Below are the previously announced Groups

Rosemary H. Anderson was the former Director of Development of Benedictine Academy. She was born on May 22, 1951 and entered eternal life on January 20, 2019. Mrs. Anderson worked for the Girl Scouts of America for over 30 years, becoming one of the first women inductees into the Lion’s Club of Longhill Township in 1993. She also received the Saint Vincent de Paul Medal from her parish Saint Vincent de Paul in Stirling in 1998. 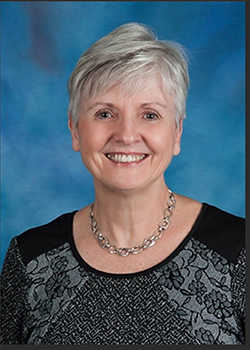 Mrs. Anderson’s work never went unnoticed as the Development Director for Benedictine Academy in Elizabeth, N.J. She was the only person to ever be inducted into the Alumnae Association as an Honorary Alumna.

Mrs. Anderson embraced the Benedictine Way of Listen, Learn, Love, Lead for 17 years. She encouraged the young women of BA to “think world-mindedly, look out for your neighbor, ask questions, and do not break faith with anyone in your community.”

Mrs. Anderson is remembered for her intelligence, determination, her selfless and giving personality, a terrific sense of humor, a love of all things French, and the belief that “A woman should be two things: classy and fabulous.”

Below are the previously announced Groups

Sr. Mary Downey was born in Kearny, N.J., to James and Mary Downey. She became a Benedictine Sister on September 8, 1961. Her first Monastic profession was on June 15, 1963.

Sr. Mary Downey worked in many different schools and areas as a teacher. Some of the schools she taught at were: St. Anthony's in Washington, D.C., Bender Memorial Academy in Elizabeth, N.J., St. Joseph's in New Paltz, N.Y., and Our Lady of the Lake in Sparta, N.J. Not only was she a teacher, but she was also a Principal at Immaculate Conception in Hackensack, N.J, St. Genevieve's, and Benedictine Preschool, which she founded and directed in from 1996-2009.

She was the first editor of The Listening Post and sang in the Schola. In her free time, she enjoyed singing, gardening, and doing art. Some of her artwork was featured on many programs and her sketch of the chapel lamp is on the cover of the Liturgy of the Hours book that is used daily. Her artwork is a reminder of how she used her talents.

Though Sr. Mary’s life is remembered and carried on with the Benedictine Sisters of Elizabeth, her legacy will also be honored with “The Sr. Mary Downey, O.S.B. Group” of St. Benedict’s Prep - Girls Prep Division.

Below is the previously announced Group

Mrs. Betty Edelen, aside from being a hard-working and loving mother, was the Administrative Assistant at St. Benedict’s Prep. 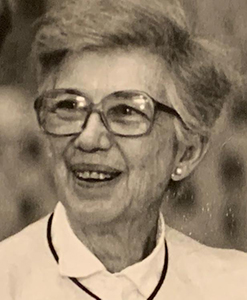 She made sure files were in order and filled out various papers for local and state authorities. When she was not assisting Fr. Edwin with the newly reopened school, she was giving advice to students.

Fr. Albert Holtz, O.S.B. '60 shared with us that Mrs. Edelen was considered a maternal figure for the students at SBP: “In this unofficial role, she helped give the school, right from the start, its unique atmosphere of ‘home’ and‘family’ that it still here today.”

Mrs. Edelen’s legacy continues with her children, but specifically with her son, who is Rev. Luke Edelen, O.S.B. '68 of Newark Abbey. He is also the Chancellor for the Syriac Diocese of Our Lady of Deliverance, and teaches Latin at St. Benedict’s Prep.

Betty dedicated her career to the revitalization of St. Benedict’s Prep. She is part of the reason that St. Benedict’s is a safe place for so many students today. She was instrumental in creating a community with people that offered emotional support.