St. Benedict’s absorbed more hits this year than perhaps any team that has won the previous 12 national titles in school history.

But what separates the 2019 Gray Bees from the rest is their resolve. 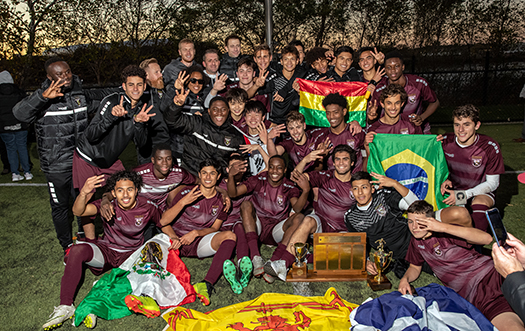 Coach Jim Wandling’s team possessed a never-say-die attitude and turned that into yet another unbeaten campaign, which was capped by a brilliant performance in the State Prep A Championship game.

St. Benedict’s scored three times in the final 13 minutes of the first half and cruised to a 5-1 victory over Pennington on Friday at Riverfront Park and concluded the season with a 19-0-1 record and riding a 57-game winning streak. It was also St. Benedict’s 30th state title in 31 years.

“This year was way different than last year. Last year, we pretty much handled everybody we came up against and then lost almost the whole team with all the seniors we had,” explained junior tri-captain Zemi Rodriguez. “We were very young this year and found ourselves behind in a few games. But we kept our fighting spirit and began playing as brothers and, by the end of the year, I don’t think anyone in the country could keep up with us.”

The Gray Bees, the unanimous No. 1 team in the nation in the latest polls, rallied from the wrong side of the score in three different matches this season. The first came against St. Ignatius, which was ranked No. 1 at the time in one of the two major national polls, when SBP scored twice in the second half to erase a two-goal deficit before running out of time against the team from Ohio, whose state rules don’t permit overtime. 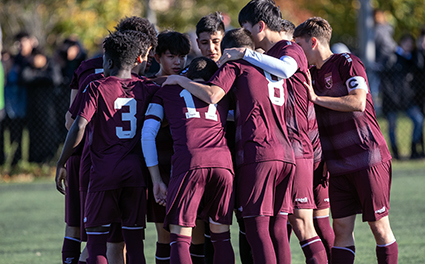 SBP trailed against another nationally-ranked squad in Delaware’s Salesianum, but wiped out a one-goal deficit without too much trouble before prevailing, 2-1. But perhaps the biggest victory of the season came against reigning New Jersey state champion, Christian Brothers Academy, when the Gray Bees scored twice late for a spectacular victory on the road in Lincroft.

“Being behind this year was something we never experienced before,” said Rodriguez. “But having to fight so hard in some of those games only made us stronger in the end. It made us believe that we could beat anyone, and I really think it was destiny. It was an amazing feeling and to finish off today with my brothers was just awesome.”

The Gray Bees, which knocked off six teams ranked nationally, including the co-No. 1 team in the country and the fourth-ranked club, along with three teams ranked in New Jersey’s Top 20 rankings, handled Pennington from the outset on Friday.

SBP, which missed three quality chances early, finally broke through in the 27th minute. Cao Chaves carried the ball from the left of the center circle across the top of the penalty area before finding an open Hyunjun Sun at the top left-side of the box.

Sun quickly played a ball into the middle of the box when Rhys Armstong, after gaining inside position on a defender, took a fast touch on the ball before firing a strike into the left side of the net. 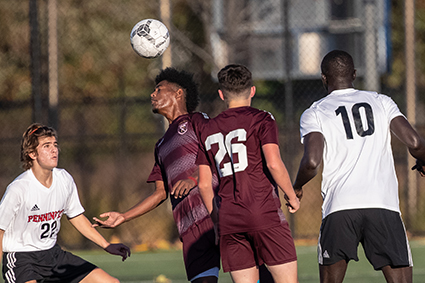 St. Benedict’s all but sealed the match when Jamar Ricketts headed home a goal off an Armstrong penalty kick with only a minute left in the first half. Thiago Quintanhila upped the score to four goals with a volley off a pass from Chavez.

Pennington finally got on the board in the 58th minute, but the Gray Bees answered with a goal of its own after Ricketts followed his own rebound for the final goal.

The goal by Pennington was the first allowed by the Gray Bees defense since a 2-1 victory over Salesianum, a span of eight games. The stifling defense was led by the All-American Chavez on the left flank, Preston Rushmore and Hojin Jeong in the center and Sun at right back – all fronting goalkeeper George Silva, who racked up 15 shutouts and relinquished only 6 goals all year.

“To overcome the adversity that they were dealt with throughout the season is a huge accomplishment,” praised St. Benedict’s coach Jim Wandling, who raised his 10-year coaching record to 186-8-4. “In a lot of ways, some of the challenges they had to rise above make this one very special.”

Wandling ‘92, who was on the first Gray Bee national championship squad in 1990, said none of this would have been possible without his assistants – Sylvers Owusu '03, Kieran Patrick, Clint Caso '11 and Brendan McKeown. They all work together tirelessly to get the most out of their players, and collectively put together a schedule that ranks as perhaps the toughest in the nation

Now the Gray Bees will wait to see if the 13th Star, designating national titles, will be realized when the rankings committee releases their final polls for USA Today and TopDrawerSoccer at the end of the month.

“The rankings committee can put whatever number they want next to our name,” said Wandling, whose team is seeking an unprecedented third straight national crown. “But until someone beats us, we’re confident that we are the top-ranked program in the country.”