The Gray Bees, the unanimous No. 1 ranked team in the nation, raised their record to 16-0-1 with a 5-0 victory over a tough Hunterdon Central squad, the ninth-ranked team in N.J., on Tuesday on a rain-soaked field at NJIT.

Coach Jim Wandling's club, which has gone unbeaten since the start of the 2017 season – a span of 54 games – has just three games left in the season while trying to capture an unprecedented third straight national championship. 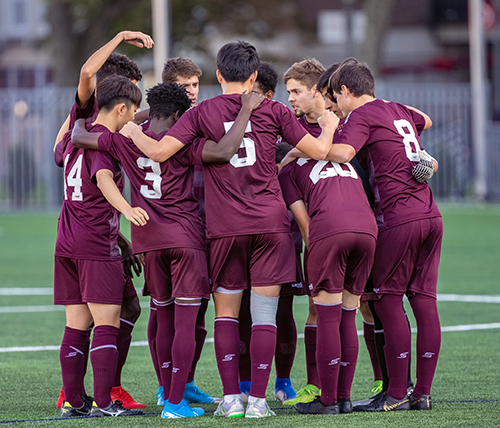 “There’s been virtually no talk of what potentially can be out there at the end of the season,” said Wandling. “This group has been very good about just focusing on the next game at hand.”

The Gray Bees stemmed Hunterdon Central’s highly-energized side at the start by scoring the game’s first goal in the fourth minute. Hyunjun Sun switched the field nicely with a long pass to Peter Yaro on the right flank.

Yaro then slotted a ball to the top of the penalty area where a hustling Thiago Quintanhila corralled the pass and quickly unleashed a shot that caromed off the left post and into the net with just 3:40 gone on the clock.

From there, it was all St. Benedict’s. Zemi Rodriguez scored a pair of goals bridging the halftime break – the first one coming off a header on a cross by Tony Yeboah in the 33rd minute and the second coming off a nice give-and-go with Joel Quieroz in the 48th minute.

Yeboah scored a goal of his own on a beautiful play by Quieroz in the 63rd minute (watch video of goal below). Yaro capped the scoring in the in the 74th minute, finishing a rebound after following up a shot by Quintanhila.

The Gray Bees complete regular season play on Friday at 4 p.m. on the road against Newark East Side at Ironbound Stadium before the State Prep A Tournament commences on Tuesday (Oct. 29).

“Right now, I don’t feel like we’re overlooking anybody, and rightfully so,” explained Wandling. “It’s taken some time for us to find the best version of ourselves. But I think it’s coming along and I like where we are at this moment – we’re feeling good about where we are at this point in the season, but realize there’s still some work to do,”