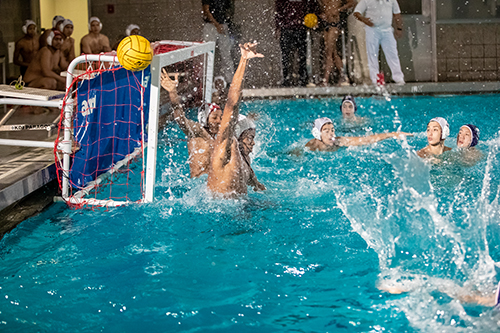 The Gray Bee water Polo team competed in the Garden State Championships on Friday and Saturday and made it to the championship game before finishing as runner-up to the host school in Lawrenceville.

SBP opened the tournament on Friday against Pennington and, for the third time this season, beat the team from Mercer County, 14-9. Carlos Presina led SBP with 5 goals, while KyRon Parker had 4 and Rafael Rios add a hat trick.

The Gray Bees dropped its second game to Pingry, 18-14, but came back strong on Saturday and reversed an earlier season loss to St. Peter’s with a 18-14 triumph  with Presina and Eddie Zungia hitting for 5 goals apiece.

St. Benedict’s made it to the championship by battling Lawrenceville to a 17-17 draw, which gave SBP a berth in the final against the same school. Zungia led SBP with 7 goals.

The championship game, however, saw the Gray Bees run out of steam and drop a 21-10 decision to the Big Red.

Zungia led SBP with a team-high 21 goals for the tournament, while Presina and Parker each added 18 goals. Rafael Rios chipped in the 8 goals for SBP (8-15-1), which will wrap up the season in the Eastern States Championships next weekend in Maryland.