It’s been more than a decade since the nation invested billions of education dollars in the No Child Left Behind Act and Common Core standards to close the achievement gap. According to recent reporting from The New York Times, the effort has made little to no difference. Through the Vox Institute, St. Benedict’s Prep is reframing the achievement gap and helping schools across the country empower students for success. 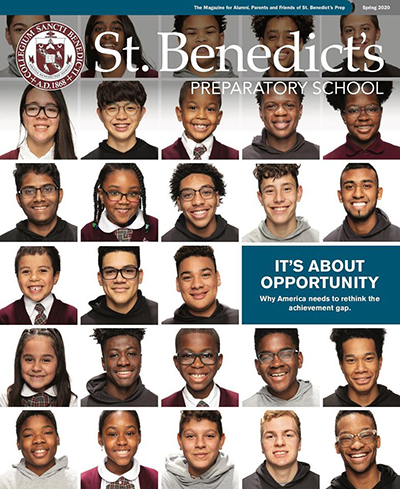 Two reports released in 2019 point to lackluster results in the push to transform American education. According to the National Assessment of Educational Progress (NAEP) report card, only one-third of American fourth and eighth graders can be considered proficient readers. Reading scores also declined over the last two years in nearly every percentile. Though modest gains have been achieved since 1992, there is virtually no improvement in the lowest quintile, the most vulnerable student group education policies like No Child Left Behind were intended to help. Little progress is seen on an international scale, as well. According to the Program for International Student Assessment (PISA) results, a worldwide system that measures educational systems, the average reading literacy score of 15-year-olds in the U.S. showed no measurable difference from 2000 to 2018. In the midst of all the noise surrounding national testing data and the achievement gap, the Vox Institute is doing the actual work to impact educational performance by helping schools across the country adapt mindsets and practices that empower disadvantaged students for success.

THE PROBLEM WITH HIGH STAKES TESTING

Established in 2016, the Vox Institute is a response to the expressed interest of schools, school leaders and education programs nationwide to understand the St. Benedict’s Prep model. Reframing the very notion of the achievement gap is a critical first step, according to the Institute’s Executive Director Glenn Cassidy, Ed.D., ’90. “I think we measure education the wrong way in this country,” he said. “We know the concept of high stakes testing just is not effective, and it doesn’t tell the full story. If we only focus on outcomes, which high stakes testing does, we miss all the inputs.”

Inputs, according to Dr. Cassidy, can be students’ households, their neighborhoods, issues affecting society as a whole and even, “What a child faces when they walk to school each day or when they go home each night.” When legislators and schools frame the disparities in educational performance as an achievement gap, they are missing the larger picture. “What we focus on at St. Benedict’s is thinking about the opportunity gap,” Dr. Cassidy continued. “How can we create opportunities for students to feel empowered? How can students feel like their voice matters? How can they feel like they have control over something? Addressing these and other issues that are holding kids back, that’s what opens up the opportunity for better outcomes.”

At a school more than 1,300 miles away from Newark, a hand goes up and 100 young men instantly quiet. It’s morning Convocation at Crossover Preparatory Academy in Tulsa, Okla. The motto is different. Crossover Prep kids say, “I am my brother’s keeper,” rather than “Whatever hurts my brother, hurts me,” and student leadership is built upon teams, not groups, but much of the structure and principles of this Christian college preparatory school are adapted from the St. Benedict’s model.

In the midst of all the noise surrounding national testing data and the achievement gap, the Vox Institute is doing the actual work to impact educational performance by helping schools across the country adapt mindsets and practices that empower disadvantaged students for success.

“I was blown away by St. Benedict’s Prep,” said Pastor Philip Abode, executive director of Crossover Prep. The school’s relationship with The Hive pre-dates the Vox Institute. In 2015, the pastor watched The Rule, the award-winning documentary about the monks of Newark Abbey that posed the question, “Want Inner City Schools to Finally Succeed?” Pastor Abode was intrigued by the student leadership he saw on film, college readiness and an educational model that encompassed seventh and eighth grades. “As soon as we could, we scheduled a trip,” he recalled. “Seeing St. Benedict’s Prep in person was better than the documentary. I was sold that this was what we needed to do.” 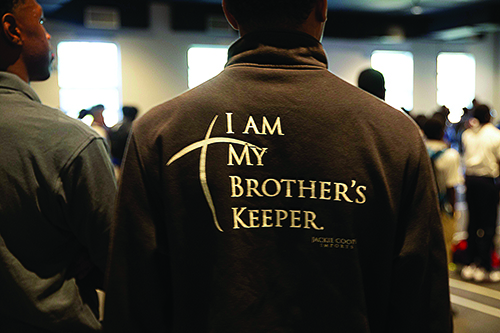 Crossover Prep opened in Fall 2017 with just 27 seventh graders. After developing their own version of Convocation and the Group System, they continued to partner with St. Benedict’s through the Vox Institute. The school, which is majority African-American, doubled in size, and now serves sixth to ninth grades, with plans to graduate its first high school class in 2023. A team from the Vox Institute, including Gray Bees known as Vox Fellows, visited Crossover Prep last year for an assessment. “When we got there, one of our seniors on the trip said, ’I feel like I never left Benedict’s,’” Dr. Cassidy recalled. “Now remember, there were only seventh and eighth graders at the school at the time. We could definitely feel that they took a lot of inspiration from what they had seen and experienced at St. Benedict’s.”

“I’m really encouraged by the progress we’ve made so far,” said Pastor Abode. The seventh graders who started the school in 2017 are now high school freshmen. “We’re seeing these kids help their classmates meet school expectations. They’re encouraging other guys and starting to step up as leaders and embrace the culture.” The full impact of adapting St. Benedict’s model, however, won’t be known for a few years. “[Ninth grade] is a big transition year to become a full member of the community and cross over into manhood,” Pastor Abode explained. “We won’t know how well it’s working until students are passing on the school culture to other students.”

WHAT DO THE KIDS NEED?

Since its inception, the Vox Institute has worked with a host of private, public and charter schools nationwide. Its service to schools encompasses four core tenets of St. Benedict’s: community, student leadership, counseling and experiential education.

The tenets evolved from a simple, yet radical idea the monks of Newark Abbey applied in late 1972 when they decided to open a school after the closure of St. Benedict’s. “We didn’t start out with a philosophy,” remembered Fr. Albert Holtz, O.S.B. ’60, who had just completed a master’s degree in philosophy and education at Columbia University at the time. “We started out by saying, ’What do the kids need? What’s best for the kids?’

”That single question drove the St. Benedict’s model that others look to emulate today. Much of what schools seek to adapt are elements of what Fr. Albert refers to as St. Benedict’s hidden curriculum. “Schools don’t call up the Vox Institute and ask, ’How do you teach social studies or geometry?’” he noted. “They ask, ’How do you do what you’re doing in community?’”

“We hold kids to high standards, but a lot of people do that,” Fr. Albert pointed out. “One of the things we did early on, was figure out that if we wanted to raise the bar, we’d better teach kids how to jump higher. It’s easy just to make higher demands on kids. But kids will just stand there looking at the bar. It takes extra work. It takes devotion, as well as teaching and motivating kids to show them how to jump higher.”

According to Dr. Cassidy, schools and education nonprofits are referred to the Vox Institute in a variety of ways. Some saw the 60 Minutes broadcast on The Hive in 2016. Others connect after hearing Headmaster Fr. Edwin Leahy, O.S.B. ’63 or Assistant Headmaster for Student Life Ivan Lamourt, Psy.D., ’82 speak at conferences and events. The Institute also partners with Transcend Education and the New School Venture Fund, national nonprofits working to reimagine mainstream education in this country, as well as the Alliance for Catholic Education (ACE) at the University of Notre Dame. Gregory O’Donnell, Associate Director, Leadership Programs has accompanied cohorts of school leaders on visits to St. Benedict’s for two ACE initiatives, the Center for Transformational Educational Leadership and the Mary Ann Remick Leadership Program. “St. Benedict’s is unique,” Mr. O’Donnell said. “One of the things we’re looking at when we visit is trying to help our leaders see how they can drive change and build collective ownership of the culture.” 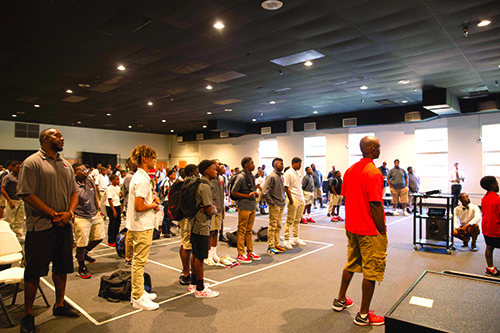 Dr. Cassidy and the Institute’s Program Director Louis Lainé ’12 established a blueprint for school partnerships. Schools or groups make an introductory visit to The Hive, which is often followed by a full-day workshop. When Dr. Cassidy and Mr. Lainé go out to observe interested schools, they bring Vox Fellows to provide firsthand accounts of how the Group System and The Trail develop leadership and responsibility in kids. These visits are also an opportunity for the Vox Institute to gauge the extent, if at all, St. Benedict’s mindsets and practices can be adopted into the school’s environment, and the parameters of a longer-term partnership.

“We’ve been very clear with people,” Dr. Cassidy emphasized. “We don’t want to be the next reform effort in your school. What we’re talking about, the idea of building community, student leadership, counseling or experiential education, is going to take years to fully implement and change mindsets. You can’t go into it with the idea of ’try it for a year and see what happens.’”

Newer schools have formed some of the most productive partnerships with the Vox Institute. Kingdom Prep Lutheran School, for instance, is a recently established, all-male secondary serving young men in Milwaukee County, Wisconsin. Recounting the story of how St. Benedict’s reopened in 1973 on an EdChoice podcast, Kingdom Prep Founder and Principal Kevin Festerling said, “We’ve largely taken a lot of [the St. Benedict’s] playbook and brought it here to Milwaukee.”

Flexibility for any partner school is key. “We’re implementing the things that work for our school,” said Sydney Giovinazzo, a founding teacher at Kingdom Prep who became well acquainted with The Hive when she taught Summer Phase in 2017. Kingdom Prep opened in 2018 with 60 freshmen and will graduate its first class in 2022. To build student leadership from the ground up, the school modified St. Benedict’s Groups to Packs, which are composed of seven to eight students and one adult advisor. Kingdom Prep students have responsibilities like attendance, holding each other accountable and adhering to the four pillars of faith, service, experience and excellence. Vox Fellows also conducted leadership training with the school’s first freshman class.

Not everything worked according to plan. The school introduced a wilderness expedition modeled on the Backpacking Project that it will likely not repeat next year. “It wasn’t fulfilling the purpose of building community in the way we would like,” noted Ms. Giovinazzo. Still, the ongoing relationship with St. Benedict’s is “giving us a view of what is possible and a vision of a school that is still adapting.”

Mr. O’Donnell too, wants the next generation of transformational leaders in Catholic education to see what’s possible. “In today’s day and age of high stakes accountability, we need to recognize that one of the biggest things that Catholic schools — and St. Benedict’s in particular — do really well is taking time to be together in community,” he said. "St. Benedict’s students know they are there for one another, and while they all need to individually succeed, that alone is not enough unless they’re supporting each other. At the end of the day, these are the things that are just good for society.”