Ayesha Blackwell-Hawkins, Esq., didn’t realize the true impact her mother, Regina L. Blackwell H’10, had on generations of Gray Bees until after she passed away in December 2014. Mrs. Blackwell was St. Benedict’s Prep’s school nurse for 22 years, known for helping kids out with lunch money, but also marching them back to the classroom if they faked an illness. “We didn’t realize that we shared my mother with so many people,” said Ayesha, who along with her brothers, Adrian ’89 and Maurice ’94 Blackwell, heard the same refrain from so many alumni, “Your mother was like a mom to me.” 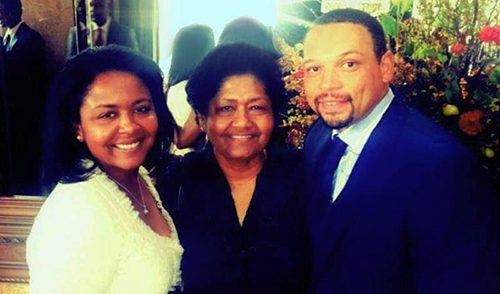 Ayesha, and her husband, James C. Barnes Hawkins, Esq. ’87, wanted to commemorate Mrs. Blackwell’s legacy at the School. “She was always so involved,” said Ayesha, noting that beyond her duties as an RN, her mother took care of the monks, gave students a place to stay when they needed one and hosted international exchange students. “St. Benedict’s meant a lot to her with work that she found really meaningful.”

The couple established the Regina L. Blackwell Annual Scholarship in December 2016. For James, this was also a meaningful way to give back to a school that had given him so much. “St. Benedict’s has been everything to me,” he explained. “It was a steppingstone. It’s why I’m the man I am today.” St. Benedict’s roots run deep on the Hawkins side of the family, as well. Will Barnes Hawkins ’88 is James’s brother and Abbot Melvin Valvano, O.S.B. ’56 is his godfather. The couple’s son, James Jr., who is now serving in the U.S. Navy, attended St. Benedict’s, and Ayesha and James were married by Headmaster Fr. Edwin Leahy, O.S.B. ’63 at St. Mary’s Church, Newark Abbey.

The unrestricted gift the Hawkins’ make to The Hive each year, nearly tripled when Ayesha became Global Head, Talent Mobility at Johnson & Johnson last year. The company offers a 2 to 1 match on employees’ charitable giving up to $10,000, which impressed Ayesha when she considered all of the pros and cons of changing jobs. “This was definitely one of the pros,” she said. “It said a lot about J&J’s giving spirit and their commitment to the community.”

The impact on The Hive was exponential. Each year, the Hawkins’ contribute between $13,000 – $15,000 in stock to the scholarship; the match from Johnson & Johnson adds $20,000, bringing the total annual contribution to $33,000-$35,000. “Ayesha and James exemplify the spirit of St. Benedict’s. Their generosity and understanding of the importance of the work the School does is appreciated by the students they are helping with their very valuable contribution to the Hive,” remarked Judith Mayo, Leadership Gifts Officer at St. Benedict’s.

Setting Up the Gift Match Was Easy 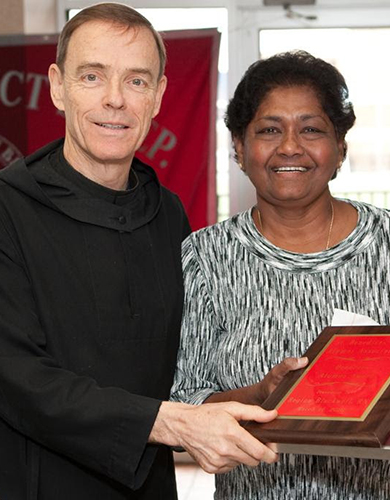 Setting up the gift match was simple and easy according to Ayesha. First, she worked with the School to get St. Benedict’s Prep listed as an approved charity for the matching gift program at Johnson & Johnson. Then, when the couple make their annual donation, she uploads the information to an internal company system and the gift make is usually approved within a week. Ayesha encourages others to look at this employer benefit. “You don’t realize how important matching gift programs are until it’s presented to you,” she said. “It’s important to give back to a school that’s done so much for the community.”

Alumni and friends of St. Benedict’s can use this tool to see if their company sponsors a matching gift program.

In addition to the annual scholarship at St. Benedict’s, the family has kept Mrs. Blackwell’s legacy alive in another endeavor, Lily Tea Company. Lily, as Mrs. Blackwell was known to family and friends, loved “Ceylon Tea Time” in her native Sri Lanka, a tradition she shared after traveling to her home country in 2006 after the devastating tsunami.