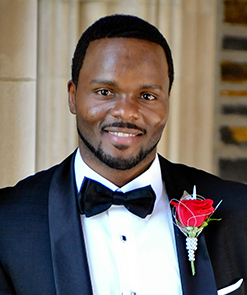 The Rasheed A. Wiggins Memorial Scholarship recognizes the achievements of an outstanding student who best exemplifies the ideals and spirit of the scholarship’s namesake. The recipient of the scholarship represents the persona of a man just as unique. It was created in honor of Rasheed A. Wiggins, a creative and talented marketing executive with an innate passion for entrepreneurship. Scroll down to read more about Rasheed.

Rasheed was born in Belleville, New Jersey, on March 24, 1977. He was the youngest of three children of Ronald and Mary Wiggins. He attended the Chad School, St. Lucy’s Elementary School and the distinguished St. Benedict’s Preparatory High School in Newark, New Jersey. Through hard work and dedication, the warrior earned numerous accolades while on the school’s fencing team and as a member of the Metro National Karate team. He was also an esteemed member of Shakil's School of Martial Arts Karate Organization, Inc. As an adult, he began boxing and won both the local Golden Glove Championship in Cincinnati and the Dynamic Fighting Championship in Orlando.

Rasheed valued education. He earned his Bachelor of Arts degree in political science from Duke University. He later earned his Master of Business Administration degree from Duke’s prestigious Fuqua School of Business. He was a proud member of the Iota Xi chapter of Kappa Alpha Psi Fraternity, Inc.

After college, Rasheed followed his heart and became an entrepreneur. He co-founded AdRelief, a digital advertising agency. The marketing professional went on to build a strong career through positions at several Fortune 500 companies in Chicago, Cincinnati and Orlando. He worked on a variety of brands, increasing their digital, social and general marketing performance. He relocated to Orlando in 2013, accepting a position at Darden Restaurants.

Rasheed will be remembered for his affable personality, strong faith in God, warm smile, courageous ambition and incredible strength. He loved being with family and friends, and would give his all to help anyone in need. He brought light into the lives of everyone he met.

He is survived by his darling wife, Kimberly Holmes-Wiggins, and their fur baby, Lola Mae.