St. Benedict’s Preparatory School is proud to announce its first honoree for the 2017 Annual Scholarship Gala – Big Ten Commissioner James E. Delany. This year's Gala promises to be another lively evening to benefit our vital scholarship program. Please click here for information on how to register for the Gala or for sponsorship packages for our May 11 event. Read below about our first announced honoree: 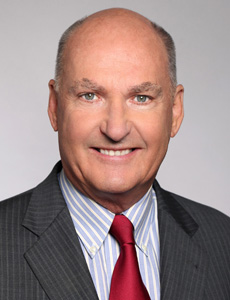 Delany, who last year received a Lifetime Achievement Award from the Naismith Basketball Hall of Fame, will receive the Medal of St. Benedict's, the school’s highest honor, at St. Benedict’s Annual Scholarship Gala on May 11.

Delany, who has been the commissioner of the Big Ten Conference since 1989, was a two-time All-State basketball player as a third-generation captain for St. Benedict’s Prep. His father, Francis, graduated in 1936 and his grandfather was a 1906 graduate. His brother, Frank, also was a St. Benedict’s grad (1962) and like Jim, played basketball under legendary coach Jack Dalton ’44.

Delany went on to graduate from the University of North Carolina, where he was a three-year varsity letter-winner and twice helped the Tar Heels reach the NCAA Final Four. He also received his Law Degree at North Carolina.

Delany is married to Catherine Fisher Delany and they have two sons, Newman McMurray and James Chancellor.