It was an evening described as “magical” – a singular adjective that aptly captured the spirit of St. Benedict’s Annual Scholarship Gala on Thursday evening. The Gala is not only the largest fundraising event of the year, but it is also an opportunity for St. Benedict’s to celebrate the gifts and accomplishments of some of the most exceptional alumni and friends to enter its halls. 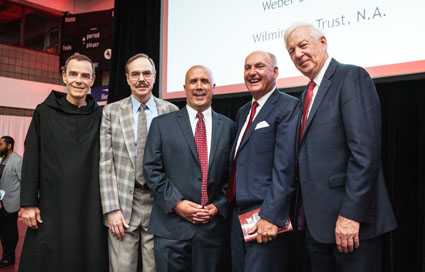 Against the backdrop of a beautifully transformed Dalton Gymnasium and amidst a vast swarm of family, friends, and Gray Bees past and present, three extraordinary individuals were bestowed the school’s highest honor, the Medal of St. Benedict’s. James Delany ’66, Big Ten Commissioner, along with Dr. Douglas Sterner H’01, long-time faculty member, and Jason Scarpone ’85, leading international humanitarian and development specialist, each received the well-deserved recognition and admiration of all in attendance.

Headmaster Fr. Edwin Leahy, bringing the room to a hush with his hand upraised, graciously welcomed all to “a place where academic excellence is expected and where young people and their interests and talents are exhibited on stage, on a mat, hardwood floor, fencing strip, or soccer pitch. Where they row and throw and work together for a common goal.”

In an eloquent opening address, Senior Group Leader Dalyn Woody ’17 expressed his gratitude for the help and support of family and friends, and in particular those in attendance at the Gala. He explained that before coming to The Hive, he didn’t understand the impact of a donation. But all that he was privileged to experience as a student at St. Benedict’s made clear just what a donation can do.

“I have spent five years of my life in this school and in the Leahy House, and I can honestly say that it has shaped me into the person I am today,” said Woody. “On behalf of every student that has walked through those 520 doors, thank you.”

(Click here to invest in the future of St. Benedict's students) 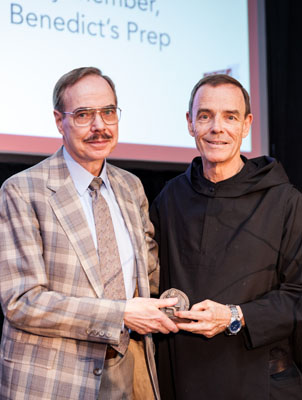 Dr. Douglas Sterner, H’01, the veteran teacher of 32 years, who is known affectionately to all at The Hive as Doc Sterner, was introduced by Dean of Faculty Michelle Tuorto H'16.

“You know someone has made an impact when the course he teaches is referred to by his name and not the subject matter covered,” Tuorto remarked. “Generations of students have taken ’Sterner,’ not U.S. II.”

Tuorto described Sterner as a teacher who can adapt challenges to achieve the best in each student and as a source of wise counsel for his colleagues.

“Doc has the ability to observe clearly, evaluate fairly, and advise honestly, with a delightful helping of his dry wit and very cerebral sarcasm.”

Stepping to the podium to humbly accept his medal, Sterner offered an explanation of how he came to be at St. Benedict’s in the first place. Admitting that his initial terror at what lay before him as a teacher was carried over from his own adolescent fears about not quite fitting in, Sterner credits the students for what happened next.

“I discovered, to my amazement, that they respected me and they liked me,” Sterner revealed with visible emotion. “And that discovery over the years has made me a better teacher, it’s enabled me to relax, be more giving. It’s the students who renewed, healed, and warmed this heart.” 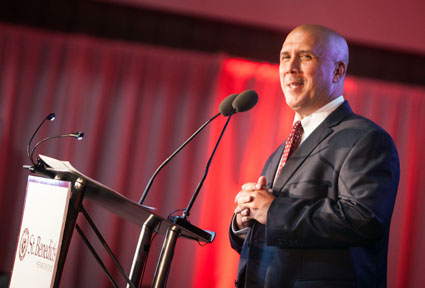 Jason Scarpone ’85, who was introduced by Fr. Ed with obvious pride and admiration for the student that he was in the 80s and the man he has become in the time since, was recognized for his lifelong devotion to improving the lives of refugees through economic assistance and poverty alleviation around the globe.

“Jason, I think, slept with a packed bag next to his bed, because any time there was an opportunity to travel, Jason left,” recalled Fr. Edwin.

During his senior year, Scarpone went on a trip to Mexico to visit people who lived what could only be called a life a misery. That experience, suggested Fr. Edwin, was what shaped Scarpone’s life.

“It gave me a quiet confidence, a hopefulness, and even a faith that when you reach out a little bit, and you go to the others in their communities, good things are going to happen, and maybe the world is going to grow a bit.” 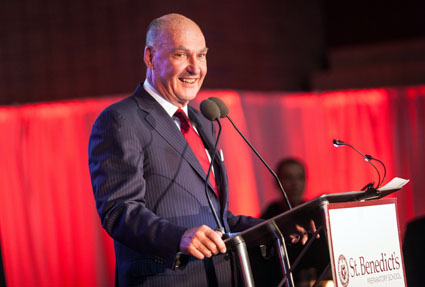 James Delaney ’66, a third-generation graduate of St. Benedict’s and the commissioner of the Big 10 Conference since 1989, has a long list of public and professional achievements.

“As impressive as these credentials are, he is proudest of his family,” noted Raftery while introducing Delany.

“I believe that because of the spirit instilled in him at St. Benedict’s to assist others to achieve excellence, this is the most gratifying contribution: In his stewardship at the helm of the Conference, he helped thousands of young men and women to pursue their hopes and aspirations without financial burden.”

Accepting the medal on behalf of his parents, Mary and Frank, Delany recounted a number of moments on the courts of his youth when the lessons of brotherhood and community learned at St. Benedict’s balanced his competitive spirit to make him a better team player.

An Inspiring Night for All. The joyful atmosphere of the evening was sustained from start to finish, as wall-to-wall the hugs and handshakes lingered long after the presentations came to a close.

The applause continues for three great individuals who epitomize the spirit of St. Benedict’s Prep.

--By Susan Kronberg
Powered by Finalsite