St. Benedict’s Preparatory School is proud to announce its second honoree for the 2017 Annual Scholarship Gala: long-time history teacher at St. Benedict's Prep, Dr. Douglas W. Sterner H’01. This year's Gala promises to be another lively evening to benefit our vital scholarship program. Please click here for information on how to register for the Gala or for sponsorship packages for our May 11 event. Read below about our second announced honoree:

What could be more fitting than to honor an honorable man? Dr. Douglas W. Sterner H’01, who has taught history at St. Benedict’s for 32 years, will make history on May 11 as the recipient of the Medal of St. Benedict, the school’s highest honor.

Doc Sterner, as he is affectionately and respectfully called by his peers and students alike, took a rather meandering path to The Hive. A Midwesterner in his early youth and a New Englander from adolescence through his undergrad studies as a History major at Amherst College, Sterner found his way to New Jersey to complete his master’s and doctoral degrees at Rutgers University.

Sterner was strongly influenced by his paternal grandmother, a matriarch who taught high school English and earned a master’s in English. After acquiring his own master’s in American History, Sterner embarked on a spiritual journey, becoming immersed in the Charismatic Renewal. The exploration may have stalled his dissertation, but it is also fair to say it enriched his perspective.

In 1984, Sterner shifted out of neutral and began to write, but his work transcended the typical doctoral dissertation.

“I didn’t want to write about something small,” he explains. “It had to be something major.” 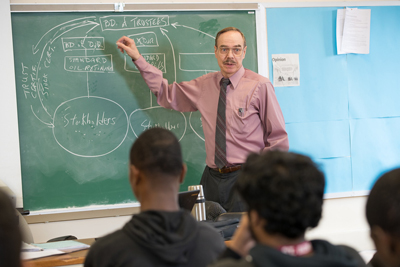 Sterner applied for and was granted a fellowship at Rutgers, but he was only about halfway through when the fellowship expired. It was 1985 and time to get a job, and it was then that he found St. Benedict’s.

Teaching by day and writing by night, Sterner finally completed his dissertation, “Priests of Culture: A Study of Matthew Arnold and Harold James,” in 1989. It was a turning point for him. What would come next?

“I had thought teaching at St. Benedict’s was a side step,” he recalls. “I looked at colleges and thought I might land elsewhere.”

He completed a training program that would earn him a certification to teach in public schools; but a number of realizations and revelations told him that he was already where he needed to be.

“First, I liked the students at St. Benedict’s. Second, I discovered that they liked me.”

Headmaster Fr. Edwin’s influence and understanding, conveyed during a road trip to Trenton where Sterner was honored for being among the top ten to participate in the statewide certification program, made it indubitably clear that Doc Sterner need look no further.

“Fr. Ed understood that my motivation wasn’t money, it was having time to write,” says Sterner, who is the only faculty member not engaged in after-school or Spring and Summer Phase projects. Sterner excels in the classroom and is passionate about academic teaching, but readily admits he’s not a “chummy” after-school guy.

Still, Sterner did struggle some in the early years, challenged by students who where difficult to manage. That’s when Fr. Ed started a rumor that Sterner had been in the Marines, and there occurred a miraculous and amusing shift in perception.

That student didn’t fail. That student became the Newark police officer who pulled Dr. Sterner over while driving in the city – just to say hello.

Today, Sterner’s US History II is a signature course; and his teaching feeds off the energy of the students. He gets the most satisfaction from those students who are really struggling but then, over the course of the semester, he sees the movement – it’s the most gratifying and rewarding aspect of his job.

Over 32 years there have been many times when students returned to The Hive after going off to college to express appreciation.

“That’s when the reward of teaching really shines.”

“I appreciate the recognition for someone who has been focused on classroom teaching, not the teacher immersed in other activities here,” he remarks.

Recalling the words of that long-ago student who told him he didn’t belong here, Sterner suggests that, “Maybe I belong here because I don’t belong here. There’s value in exposing kids headed off to college to someone like me.”

“Dr. Sterner has for years taught the only course in the school identified by the last name of the teacher,” attests Fr. Ed. “Everyone has taken ‘Sterner.’ That tells you something about the impact he has made.”

Notes: Doc Sterner will be honored with two other recipients of the Medal of St. Benedict’s at the school’s Annual Scholarship Gala on Thursday, May 11 at 6:30 p.m. For more information on the Gala, including tickets/registration or sponsorship for the ad journal, please click this link.
Powered by Finalsite