In a game-for-the-ages, the Gray Bee basketball team rallied from 15-point deficit in the fourth quarter and wound up beating Roselle Catholic, 62-56, on Saturday evening in the Hearts 2 Hands Invitational at Kean University. 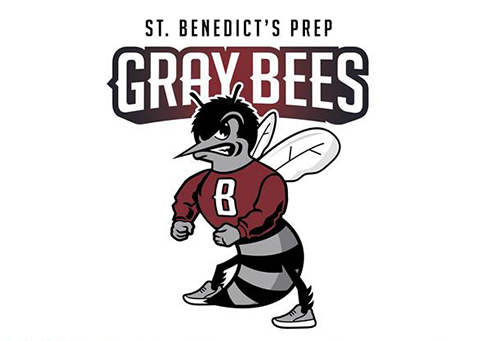 St. Benedict’s, which trailed, 49-34, entering the fourth, opened the final quarter on a 9-0 run to cut the lead to a manageable, 49-43. After Roselle Catholic finally hit a bucket, SBP kept up the defensive pressure and eventually drew even closer, 54-51, on a layup by Ty-Laur Johnson with 3 minutes left.

The Gray Bees then forced a turnover for another layup before Everton Browne nailed a three-pointer from the top, left side of the arch to give coach Mark Taylor’s squad the lead at 57-56 with two minutes remaining.

The Gray Bees maintained the lead for the remainder of the contest, getting some key foul shots from E.J. Evans and Zaba Bangala. Even when SBP missed a free throw, Evans was there to get key offensive rebound and was fouled before he made both of his shots from the charity stripe to give the Gray Bees a five-point lead, 59-54, with :59 seconds left.

Roselle Catholic, which came into the contest as the No. 2 team in New Jersey, was only able to hit one bucket the rest of the way as St. Benedict’s made the improbable comeback complete. SBP also beat the No. 1 ranked team in the state, The Patrick School, two Wednesdays ago at The Hive.

Johnson led SBP with 16 points, while Bangala added 14 and Evans finished with 13. Evans and Bangala each scored eight points during the Gray Bees’ 28-7 fourth quarter uprising.

The Gray Bees wrapped up play in the Heart 2 Hands Invitational on Sunday evening with a 77-61 victory over Trenton Catholic Academy in Clark at Johnson Regional High.

SBP put the game away with a 10-0 run in the fourth quarter when they outscored TCA, 28-11. Zaba Bangala registered a double-double (21 pts., 11 rebs.), while Toks Bakare scored 16 points and Barra Njie added 13 points 5 assists.