DESPITE THE UNKNOWN, EVERYTHING WINDS UP THE SAME FOR THE SOCCER PROGRAM
Gray Bees claim 32nd state championship and 14th star as National Champions in 2022

Coming out of a pandemic and playing a very limited schedule the previous two years, St. Benedict’s coach Jim Wandling and his staff weren’t sure what to expect coming into the 2022 soccer campaign. 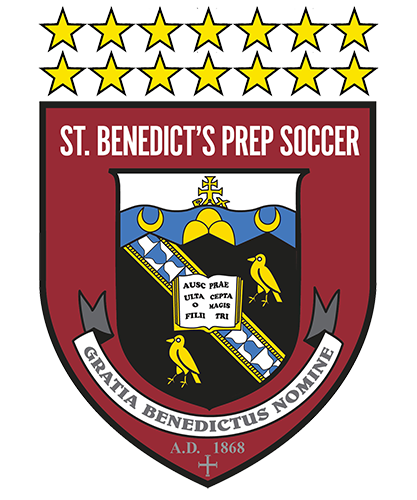 “Our program, I think more than others, got turned upside down because of COVID,” explained Wandling. “We didn’t know who was coming or going over the last two years. It was very hard on our students and our players.”

But this is St. Benedict’s, and the soccer program has built a legacy on being nothing but the best.

And, on Wednesday, the Gray Bees completed its fifth straight season played without a loss, capped by a 2-0 victory over Pennington before a vocal and partisan crowd for the State Prep A title and a 14th National Championship. The Gray Bees finished this season with a perfect 17-0 record and ran its unbeaten streak to 87 games.

(View photos of the 2022 State Prep A Championship game)

St. Benedict’s needed goals by Lewis Campbell and Martin Pulgarin at NJIT’s Lubetkin Field to beat the feisty Mercer County champion in the final for the fourth time in the last five championship games. It was the 32nd state title for the Gray Bees, which continues to add to the legacy coach Wandling has built over the last 12 years. 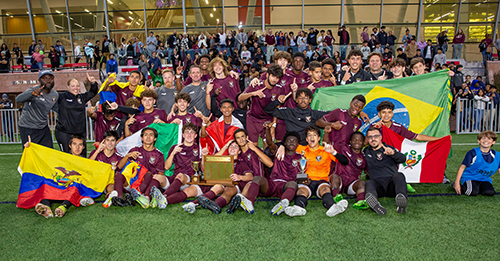 The St. Benedict’s mentor, who was the fastest coach in The Hive’s history to reach to 200-win plateau with his first victory this season, now owns a 216-8-4 career record and an unprecedented eight national titles.

“This one is special because the last two years were so unpredictable with the pandemic,” said Wandling. “Coming back this year with a full high school schedule and doing what these guys did is a really special feeling.”

Wandling and his coaches – Kieran Patrick, Sylvers Owusu, Johnny Antunes and Dave Pekarek – went to work building the program back up with an entirely new back line of defense that, despite little experience, gave up only two goals all season – both off restarts – and registered 15 shutouts. 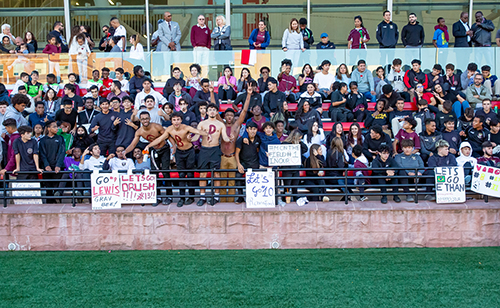 Perhaps the biggest whitewash of the season came in a 2-0 victory over then No. 1-ranked St. Ignatius of Cleveland. St. Benedict’s took over the No. 1 national ranking after that match and never looked back.

Fronting the steadying goalkeeping of Marcilio Soares were Yuvrajeer Nagra, Gianni Rosario, Mark Surretsky, Jacob Molina and Wandling’s son, Baden. Questions about their steadfastness won’t be challenged next year with three returning to the fold.

Wandling’s club did have an advantage with the likes of Belmar Joseph and Kwaku Agyabeng in the middle of the pitch backing Ransford Gyan, the reigning New Jersey Gatorade Player of the Year. All three were the main reason St. Benedict’s poured in 77 goals, with Gyan leading the way with 20 goals and 14 assists. 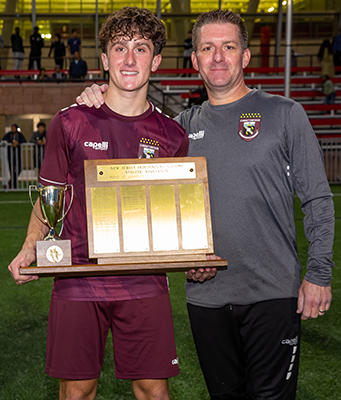 Add in other players like Campbell, who emerged with nine goals this year, including scoring once in each of the of the last two state tournament games, and Pulgarin, who dashed down the left flank into the box for the capper Wednesday, and St. Benedict’s became a complete team.

“What a dream,” said Campbell, who hails from the Caribbean Island of Guadeloupe. “To be able to come here and be able to help to team, I can’t put into words right now – wow!”

His eighth national title as head coach was even more rewarding for Wandling, who got to experience it for the first time with his son as part of the starting 11.

“For me, personally, this takes on such a greater value because I got to enjoy one with my son and that obviously makes it more special than anything else,” he said. “But believe me, this program has a lot left to accomplish in the future and we aren’t done yet. This is St. Benedict’s.”