Share to FacebookShare to TwitterShare to LinkedInShare to PinterestShare to Email
Four St. Benedict's seniors earn full scholarships as part of prestigious program

SENIORS EARN SCHOLARSHIPS TO SOME OF THE TOP COLLEGES IN AMERICA 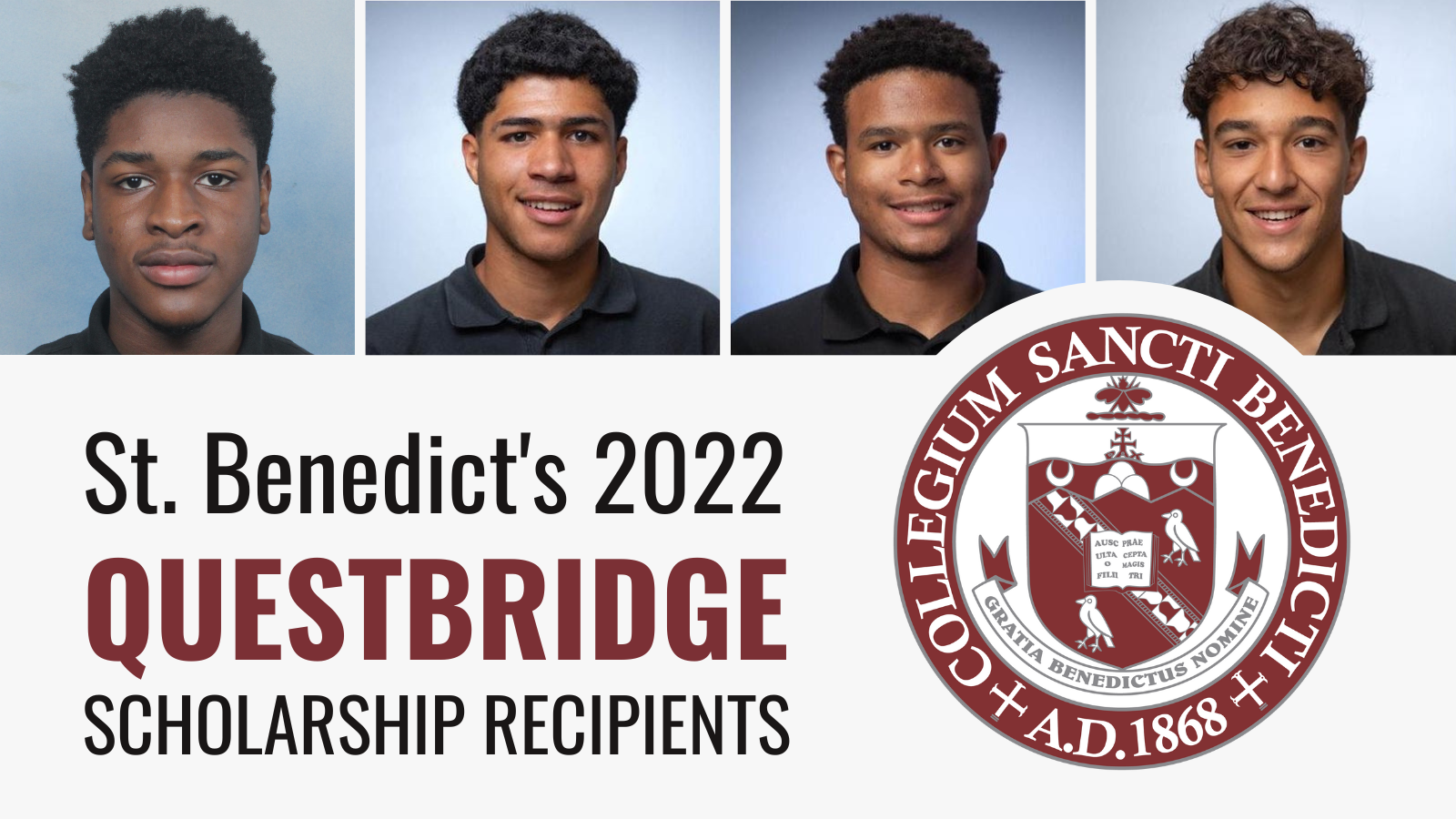 Pedro Cena ‘23 was taking a quiz in his physics class when he heard. He had told his teacher, Rich Molina ‘06, that he would get a text that day around 2:45 p.m. Molina understood the importance. When Pedro got the notice mid-quiz, he leapt up and let out a yelp letting everyone know he “matched” – QuestBridge language for acceptance into an elite college with virtually everything paid for. There were hugs and fist bumps and hoots of support. After months of an arduous application process, Pedro was finally a QuestBridge scholar, selected by Boston College, from which he would graduate totally debt free.

Pedro is one of four seniors who earned early admission and a full four-year scholarship to top colleges and universities through the QuestBridge National College Match. Carl Olivier Estime ’23 (Olivier) will attend Columbia University, Guitze Rodriguez ’23 will attend Bowdoin College and Marcilio Soares ’23 will also matriculate at Boston College. This is the second consecutive year that four St. Benedict’s seniors matched with colleges through QuestBridge. The four from the Class of ’22 are now studying at Emory University, Northwestern University, the University of Pennsylvania and Yale University.

Estime, who is from Haiti, said that the scholarship is a huge relief; the opportunity for college in Haiti is almost non-existent now. He knew coming here would give him a better future, but could not have imagined such an opportunity even a year ago. “Before I came here, I didn’t know what the Ivy League was,” he said.

As an international student here on TPS (Temporary Protection Status) and with both parents in Haiti, he knew the odds were against him. But when he found out he matched, he immediately called his father. “My Dad never doubted,” he said. “My Dad believes in me.” When he called his mom at work there was a bit of crying and praying. “Thank you, God, she kept saying,” he said. Olivier said his parents, who are professionals in Haiti, would never have been able to pay for college here.

QuestBridge is a competitive national program for academically achieving high school students from households earning less than $65,000 for a family of four. The application process officially begins in September; students are asked for information on academics, activities, household, financial background and personal challenges. They have essays to write and recommendations to get from teachers. They must submit reports from the college guidance counselor, transcripts and standardized test scores and financial documentation, which can prove difficult.

Even choosing to apply to QuestBridge can be a challenge. Given the time commitment for the initial application and that most of the colleges were out of state, Cena was at first reluctant to apply. Two Gray Bees, now QuestBridge scholars themselves, convinced him and encouraged him. He finally decided it was worth a try. “My friends helped,” he said.

Nine students completed the preliminary applications; a month later five of them were named finalists. Then the finalists had a few weeks to apply to up to 15 schools, listing them in order of preference. The first school that they matched with – that is, the first school on their list that selected them, would provide a completely funded college education. But each school had its own set of application requirements – essays, questions, interviews, videos – and the more schools students apply to, the better their chances for a match. The process exhausted the students, but they supported each other and gave each other advice. Estime applied to 13 schools and wrote 37 essays, making him the expert on that challenge. When this second round of the application process was completed on November 1, they had one month to wait for the colleges’ responses.

Rodriguez. who wants to major in economics at Bowdoin, had difficulty getting the financial documentation from his parents; his mother is in the Dominican Republic and his father is here. And he worried if his essays were good enough; he had applied to 11 schools. But when he found out he matched, all he could think about was that his parents would not have to pay anything for his college. “My mom could not believe it when I told her.”

Soares was in Florida with the St. Benedict’s soccer team when he found out he matched. He had only applied to four schools, limiting the chances of matching. He only wanted to apply to Division 1 schools so he could continue to play a very high-level of soccer as a goalkeeper. After starting and then stopping the QuestBridge application process because of school and soccer demands in the fall, he finally committed to it. “I finally did it – and now it is so worth it,” he said. He will study business at Boston College.

QuestBridge had nearly 18,000 applicants nationally this year. There were 5,613 finalists. And 1,755 students from around the country matched. Those students told their stories, and as Cena said, “this process is about following your heart.” The process takes a toll on your emotions, he added, but, “the more you listen to your heart, the better your application.”

As for the students who might be thinking about applying for QuestBridge next fall, Estime urged them to try it – to tell their story. Their hard work, and stories, could bring tremendous rewards for them and their families. All four of this year’s QuestBridge Scholars from The Hive each acknowledged the burden that was lifted from their parents because of the QuestBridge scholarship. When he first heard he had matched, Cena thought immediately of his mother, who has worked all his life to provide him with an excellent education. “She doesn’t have to worry anymore.”