FRANK S. TOROK, FOUNDING DIRECTOR OF ST. BENEDICT’S DRAMA GUILD, TO BE MEMORIALIZED AT THE HIVE

A memorial in celebration of the inestimable contributions of Frank S. Torok to the St. Benedict’s Prep Drama Guild will be held March 14 at The Hive. Torok, the first Director of the Drama Guild, who served from 1961 to 1967, died in New Haven on Nov. 21. 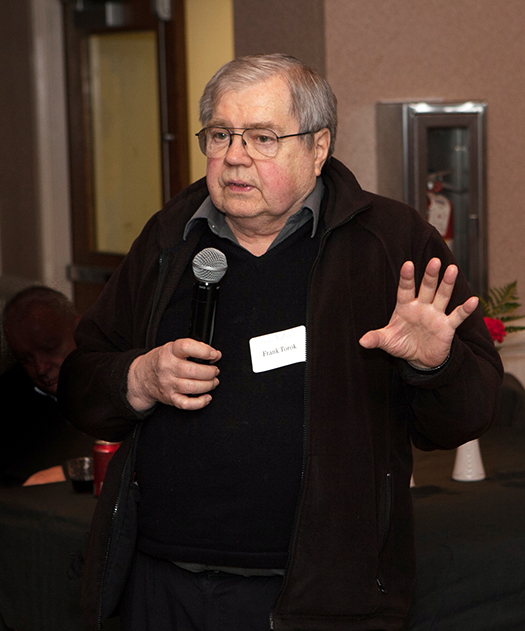 Following the current Drama Guild’s matinee performance of Richard Montoya’s satire American Night: The Ballad of Juan Jose, the Drama Guild will host a dinner for all former alums of the theater program in the school cafeteria. A memorial will follow in the Conlin Auditorium.

Pat Flynn H‘95  suggests any comments or remembrances for inclusion in the video be sent to her at pflynn@sbp.org as soon as possible. The exact content of the memorial is yet to be determined. Joe McCabe, M.D. ‘66 has offered to accompany anyone who is moved to sing; he only asks for a heads up (also through Pat Flynn) so he can prepare the music.

Torok’s Benedict’s tenure began in February 1961 with the Drama Guild’s inaugural production of Parade at Devil’s Bridge. He directed 19 subsequent productions through 1967 and staged Variety Night shows when parents took to the stage. The 20 Summer Theatre productions from 1963 to 1967 were always well reviewed and often sold out.

Hundreds of St. Benedict’s students and young women from local high schools participated in this vibrant and highly professional theatre that Torok created. These were so much more than what might be expected from high school productions. “This is not student theatre,” Ed Grant wrote in The Advocate in July 1966 about Torok’s production of The Miracle Worker. “It is not even high-grade amateur theatre; it is professional theatre presented with a competence that many Off-Broadway audiences would welcome.”

After a temporary shutdown for a week or so during the Newark uprising, the Summer Theatre continued on with a production of The Red Shoes, which was attended by 800 Newark children and their families. It was followed by Oklahoma, which played to near sold out houses.

This remarkable output set the Drama Guild on the path of excellence in theatre that continues today.

After St. Benedict’s, Torok worked in New York as a stage manager until he was selected by Yale Repertory Theater to be its Production Stage Manager. He also was appointed to the Yale School of Drama where he taught Direction and Stage Management, while running the summer theatre program at the Ivy League university in Connecticut.

In November of 2012, Torok returned for the last time to St. Benedict’s for the 50th Reunion of the Drama Guild.

Torok’s legacy as a nurturer of talent and character has endured long after he left both St. Benedict’s and Yale. In the August 2018 edition of the Juilliard Journal, Frank’s former Yale student, Evan Yianoulis, now head of the Drama Division at Juilliard, included Frank in her answer to the question, "Is there a teacher or mentor who particularly inspired you?” “... Frank Torok, who gave me my first job as a teacher and supported me as a student ...”

Pat Flynn H’95 encourages tributes for the memorial from people who knew and loved Torok.  Her own tribute is here:

It is part of Drama Guild lore that when plans were being drafted for the "new" building in the late '50's, it was Fr. Eugene who declared there would be no cafetorium, but a real theatre, modeled on a Broadway stage. And so, Conlin Auditorium came to be.  But a facility is only as good as the people who use it.  The potential of Conlin was realized the day the monks hired a young director named Frank Torok.

It takes vision and hard work to make a theatre come alive.  Gathering a troupe of young actors and technicians, he transformed novices into artists by believing in them and, more importantly, by inspiring in them a belief in themselves.  Conlin was to be a place where the work of theatre was taken seriously, and where young artists could grow in their craft.  One need only look at the roster of professionals produced over the years to recognize the success of what Frank established.

And almost 60 years after the birth of Benedict's Summer Theatre, the Drama Guild continues to thrive at The Hive. Those of us who work here today are the beneficiaries of Torok's vision for what Conlin could be.  He was our Joe Kasberger; our Prof Blood. May Frank rest in peace, and may we who have inherited his mission continue to uphold and enrich the traditions and standards he created in 1961.

Join us in Conlin Auditorium on March 14!

·       Post-Performance -  Dinner in the Cafeteria for alums of the theater program, followed by the Frank Torok Memorial in Conlin Auditorium

Register to attend the Frank Torok Memorial by clicking here.