One thing that has been commonplace over the years at St. Benedict’s Commencement Exercise – expect the unexpected. 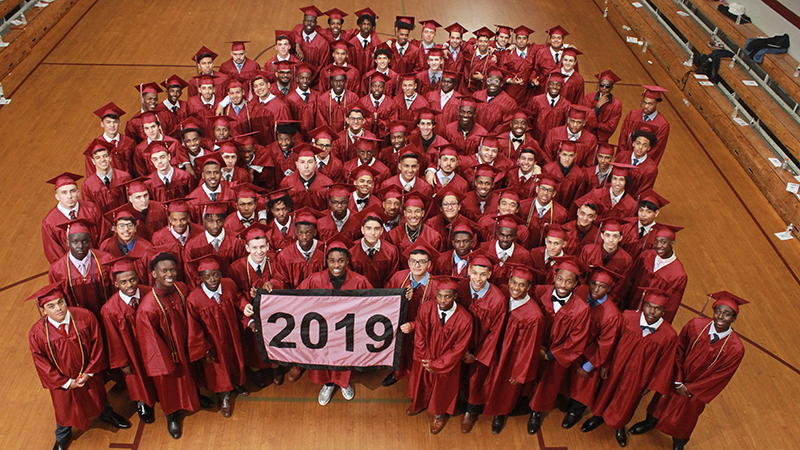 And the 145th Commencement on Sunday was no exception.

The Class of 2019 celebrated their graduation with the usual pomp and circumstance. But the 100 members of the class left their seats to break into exuberant song and dance – something usually reserved for morning Convocation during the school year.

“I told you that anything can happen at graduation,” said Headmaster Fr. Edwin Leahy, after all the seniors lined the aisles arm-in-arm while singing and dancing.

What transpired after the standard presentation of the diplomas was a festive atmosphere that transcended Conlin Auditorium. The mood turned euphoric – giving all in attendance a glimpse of what usually takes place during morning Convocation at St. Benedict’s. It was a scene that left everyone in the packed auditorium in awe. 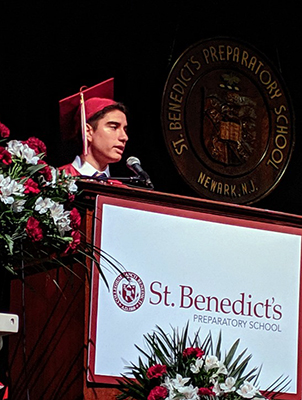 Before things turned jubilant, however, there was a more poignant portion of the day, which isn’t unique to St. Benedict’s, but the speeches always keep those in attendance on the edge of their seats.

Giuliano Gomez gave the Valedictory Address. You wouldn’t have known that when Gomez came to America from Ecuador as a 14-year-old, he didn’t speak English.

“Coming to this country was one of the most difficult decisions I have ever made in my life, and striving through this high school journey became one of my greatest challenges,” said Gomez. “But, by connecting to the community at St. Benedict’s, my life soon started to change. St. Benedict’s has built us for leadership and brotherhood, and it has applied our strengths and abilities to different groups in order to create a community that works towards a common goal.”

Gomez, who boasts a 3.96 GPA and is headed to Stetson University, closed his speech by reminding his brothers from the Class of 2019:

“We have been engineered for success and endowed with the seed of greatness,” he said. “We are now embarking into one of the most special and important experiences of our lives. Graduating from high school is not the end of our story, but a beginning that is continuing to develop. Whatever path we decide to follow from now on, I truly hope that we value our journey here. We have been prepared to comprehend and face the social challenges of everyday life, the same that cause many complex issues within local and global communities.” 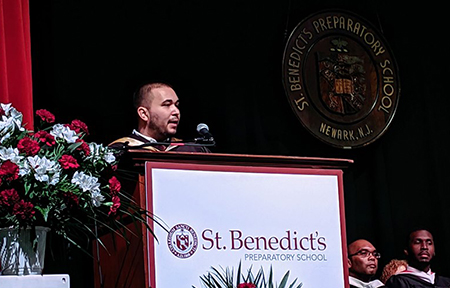 Rich Molina, a 2006 graduate of The Hive, who was the Senior Group Leader and Presidential Award Winner, gave the Commencement Address and said to the graduates, that no matter their situation, you can persevere.

“We are born into a world with circumstances we didn’t choose, but have to live with,” said Molina, who went on the graduate from Notre Dame before returning to The Hive as a teacher and fencing coach. “Some of those circumstances are great, and others are terrible. So, know that, through every good and bad choice you make, you create our collective future. And there are thousands of people you haven’t met yet who will be impacted by the choices you make.

“Every person deserves to be loved, cared for, given opportunities to learn, to grow, to live in a peaceful and healthy environment. If a decision you are about to make adds to that – great, you are on the right track. If not, reconsider your choice.” 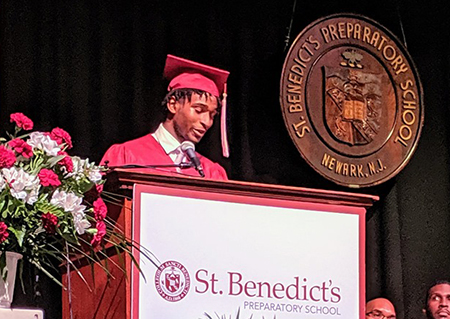 Elijah Allen-Smith, this year’s Senior Group Leader, who is headed to Boston College, directed the school in a manner described by Fr. Edwin as “a delight to work with and ranks right up there with the best we’ve ever had.” But Allen-Smith deflected any praise heaped on hm.

“It was an honor to lead the Class of ’19,” said Allen-Smith. “I would not have been able to get through this without (my fellow leaders). Whenever I felt overwhelmed or down and out, my guys would be right there for me, no questions asked. For that, I am forever grateful.

“Thank you, Class of 2019 for allowing me to lead you because ‘A leader without followers is just a man taking a walk.’ And remember where you came from. We’re all Benedict’s men. That means so much and that’s a fact, so don’t carry that title lightly.“ 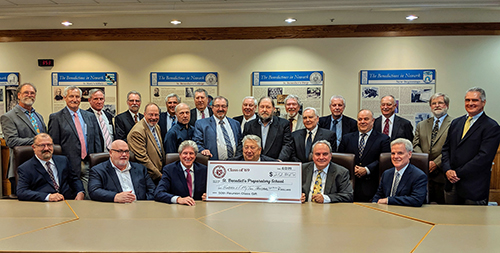 Also honored during Commencement were members from the 50th Reunion Class of 1969. The members were awarded a Golden Jubilee Citation and, just as the student graduates received their diplomas, the 50th Reunion class were invited to walk across the stage and ring the Coker Bell, which is utilized to signify any extraordinary accomplishment at St. Benedict’s.

The Class of ’69, which began the weekend with a Friday evening gathering in Hunterdon County, followed by their dinner the following evening in Union County, also dedicated the physics lab at The Hive in the name of their late classmate, Fr. Mark Payne, and all of their other deceased classmates. 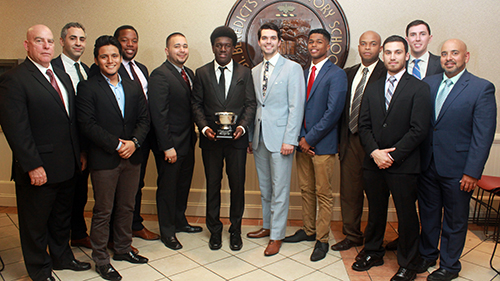