It was fitting that the Gospel for the fourth Sunday of Lent was about sons returning home. Although there were probably not many among the more than 180 alumni and their families and guests who would self-identify as “prodigal sons,” all would no doubt agree that St. Benedict’s Prep always welcomes them and, at least once a year, celebrates them and brings more honorary sons – and daughters – into the fold. 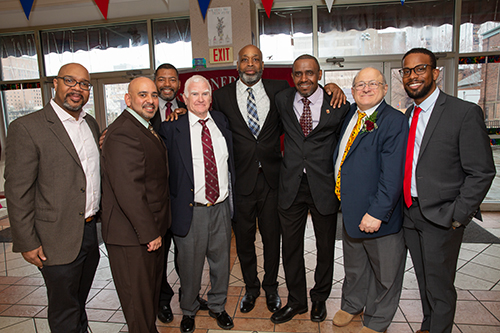 At the Annual Alumni Association Communion Breakfast on Sunday, March 31, four loyal and loved members of the community were honored. James “Jim” McKerry, a 22-year veteran of the facilities team at St. Benedict’s, and Reginald “Reggie” Baskerville, a security officer here since 1996, were both named Honorary Alumni. Glenn Cassidy ’90 Ed.D, who has worked at The Hive for 25 years in various capacities, was honored as the Distinguished Monk/Teacher; and Richard J. Lorenzo ‘63 was named Distinguished Alumnus.

St. Benedict’s Headmaster Fr. Edwin Leahy, O.S.B. ‘63, introduced the four honorees. McKerry, who has kept the school looking fresh for more than two decades, promised to keep his remarks “short and to the point.” And he did, saying with his distinctive Scottish accent, “nobody would understand me anyway.”

McKerry made particular mention of Manny Alvarez H’08, St. Benedict’s and Newark Abbey’s long-serving head of facilities who died in 2008.  He also thanked Nate McDougald H’04 who worked in facilities and maintenance for many years.

Fr. Edwin said “Reggie” Baskerville was exactly the trustworthy kind of person needed at the front door of the school, welcoming visitors in the Benedictine tradition. Reggie, who has been doing just that for more than twenty years, also thanked Manny Alvarez for persuading administrators to hire him as the main security person. Both McKerry and Baskerville are now honorary members of the Class of 2019.

Dr. Cassidy ’93 spent his entire adolescence and most of his adult life at The Hive. Now the Director of the Vox Institute, bringing the “St. Benedict’s way of student leadership” to schools across the country, Dr. Cassidy has served as aquatics director, dean of freshmen, dean of students, director of security and safety, and dean of the Prep Division. Through it all, of course, he has always been a teacher.

Fr. Edwin called him the current keeper of the history of St. Benedict’s since the reopening and the person closest to the mindset of Fr. Mark Payne O.S.B.’69, “the architect of all things non-academic that we do here.” He called Dr. Cassidy the person who keeps alive Fr. Mark’s mantra, “Don’t do for kids what kids can do for themselves.” Dr. Cassidy thanked his family and friends at Benedict’s and particularly Fr. Mark, his beloved mentor and the first “Big Bee” who bequeathed his hat to Cassidy 11 years ago. He recalled Fr. Mark’s comments on receiving this same honor a few years back. Glenn had met Fr. Mark in the hallway and congratulated him on being recognized by the Alumni Association. Fr. Mark’s comment? “It’s about damn time.”

Lorenzo ‘63 is yet another Gray Bee who has never really left The Hive. Rich, a classmate of Fr. Edwin’s, remembered both the joys and trials of his student days and admitted that he even considered joining the Benedictines “for about an hour and a half.” Nonetheless, he and his wife, Margaret, have lived the Benedictine mission and opened their home to many St. Benedict’s students, most particularly Br. Simon Peter Clayton, O.S.B., and his brother Felix Clayton ’20.

The parents of Br. Simon and Felix, both of whom are unable to hear or speak, were guests at the breakfast and joined in honoring Rich. Many of Rich’s classmates and ex-students from his time teaching Radio and Television also came to honor him. Acknowledging both his gratitude for the Distinguished Alumnus honor and the basketball games on everyone’s minds, he said he preferred to call the month, “March Gladness.”

After Br. Asiel Rodriguez, O.S.B.’s final Benediction and the singing of the Alma Mater, families and friends mingled with the honorees, took pictures and finally headed out from the home that always welcomes them.