With a cloudless blue sky and temperatures in the low 70s, the morning of July 30 was perfect at 520 King Blvd. Strains of “Oh What a Beautiful Morning” from Music Department Chair Jeremy Fletcher’s saxophone were carried by the soft breeze over the Lower Field as more than 600 Gray Bees – boys and girls – assembled in group order. Then came the Freshmen – from the Class of 2025 – exhibiting little of the expected grogginess after spending the previous five nights and four days at The Hive for the first Freshman Overnight since 2019. Group Leaders reported attendance with the freshmen acknowledging their presence at the top of their lungs – just as they have always done in Summer Phase of Convocations past. 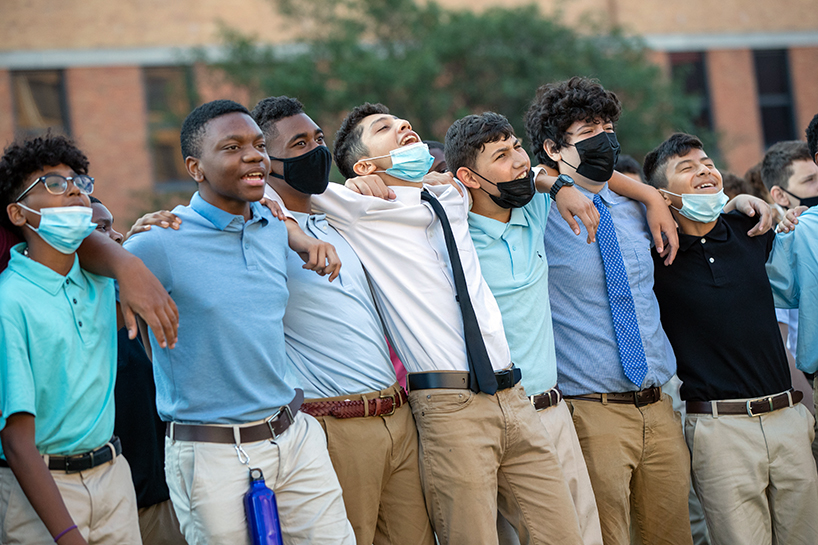 Then, with Dennis Lansang, M.D. ’18 leading the song, “Pray With Me...Let me hear you say...That you’ll stay and pray with me,” the first in-person, full-school Convocation in over 16 months had begun. The community was together, spiritually and physically, finally. St. Benedict’s Prep was back.

Getting to this point required herculean efforts from teachers, staff and especially students, many of whom had never met each other face-to-face. The new Girls Division presented significant logistical issues. When Headmaster Fr. Edwin Leahy, O.S.B., announced in the spring of 2020 that girls would be admitted to a newly co-institutional school, the suspension of in person classes made the integration of an entire new division somewhat more manageable. All students were learning virtually, so separate classrooms did not have to be found. But, when it became clear that students needed to return for in person learning for the 2021-2022 academic year, the community had to find separate physical space for the Girls Division, now 117 students strong. 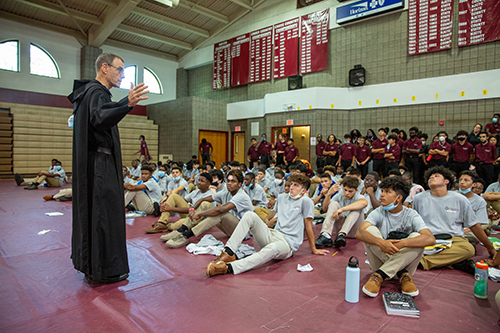 Months of planning ensued; as of this Summer Phase, the girls will occupy Cawley Hall. The first floor of the Bishop Francis building, which formerly housed College Guidance and the Business Office, has been turned into classrooms for  freshman boys. Two classrooms have been constructed in the former theater storage space, and the Academic Computing Center is also now a classroom.

One week earlier, Fr. Edwin had welcomed faculty and staff back, reminding them that they had to rebuild the community, something that was last done in the early 70s. “Only the senior class has been on the property for an entire year,” he noted. “But little by little we will rebuild.” Commenting on the Gospel story of the loaves and the fishes, he said that it was a young person who brought the bit of food the Lord then transformed to feed multitudes. Referring to the Benedict's students, he said to their teachers, “They may be bringing what the Lord can use to sustain you.” 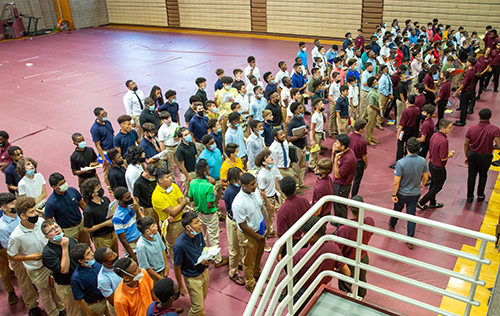 But the planning of “return” events of the last few weeks has been managed significantly by students. The senior student leaders from both the Boys and Girls Prep Divisions, introduced at the faculty meeting, have been working for weeks to plan the students’ return. 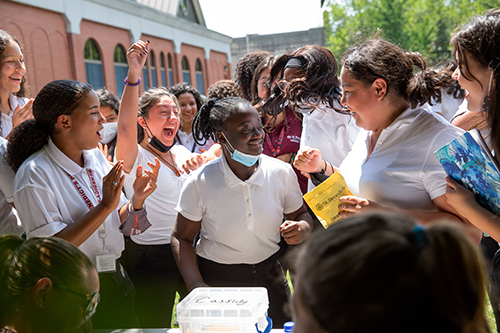 The new Senior Group Leader for the school year Justin Crespo ‘22 said, “The Orientation Days will be a way for us to transition back into the school environment by class year and for us to get a feel for the School again...a chance to re-introduce ourselves, as well as review the expectations for the new school year.” Each level had its own orientation day before the start of classes on July 30. And this year, because the current UDI’s never had an Overnight experience, they also participated in a shortened Overnight.

Molina explained that the senior leaders, boys and girls, worked with each other and “have done a great job working together setting the tone for the new co-institutional St. Benedict’s Prep.”

The two sections of freshman girls have their own five-night, four-day Overnight supervised by their student leaders and the Girls Division faculty, which has increased by two because of growing enrollment.

Just before the students left the Lower Field for the shortened first day of classes, Fr. Edwin spoke once again. “We are overjoyed to be back together... We are here to be a sign of faith,” he said. Expressing confidence in the student leadership and gratitude to everyone who has worked so hard to bring the community back together, he added, “It’s so good to see faces right here – not just faces on a screen.”