Headmaster Fr. Edwin Leahy, O.S.B. ’63 used the image of the big tent occupying the Leahy House lawn as the metaphor for the unique and spectacular St. Benedict’s Prep graduation ceremonies on June 5 and 6. For the first time in its history, the St. Benedict’s graduating class included young women – 23, to be exact, members of the new Girls Prep Division, expanding the “Big Tent” that is the St. Benedict’s community. 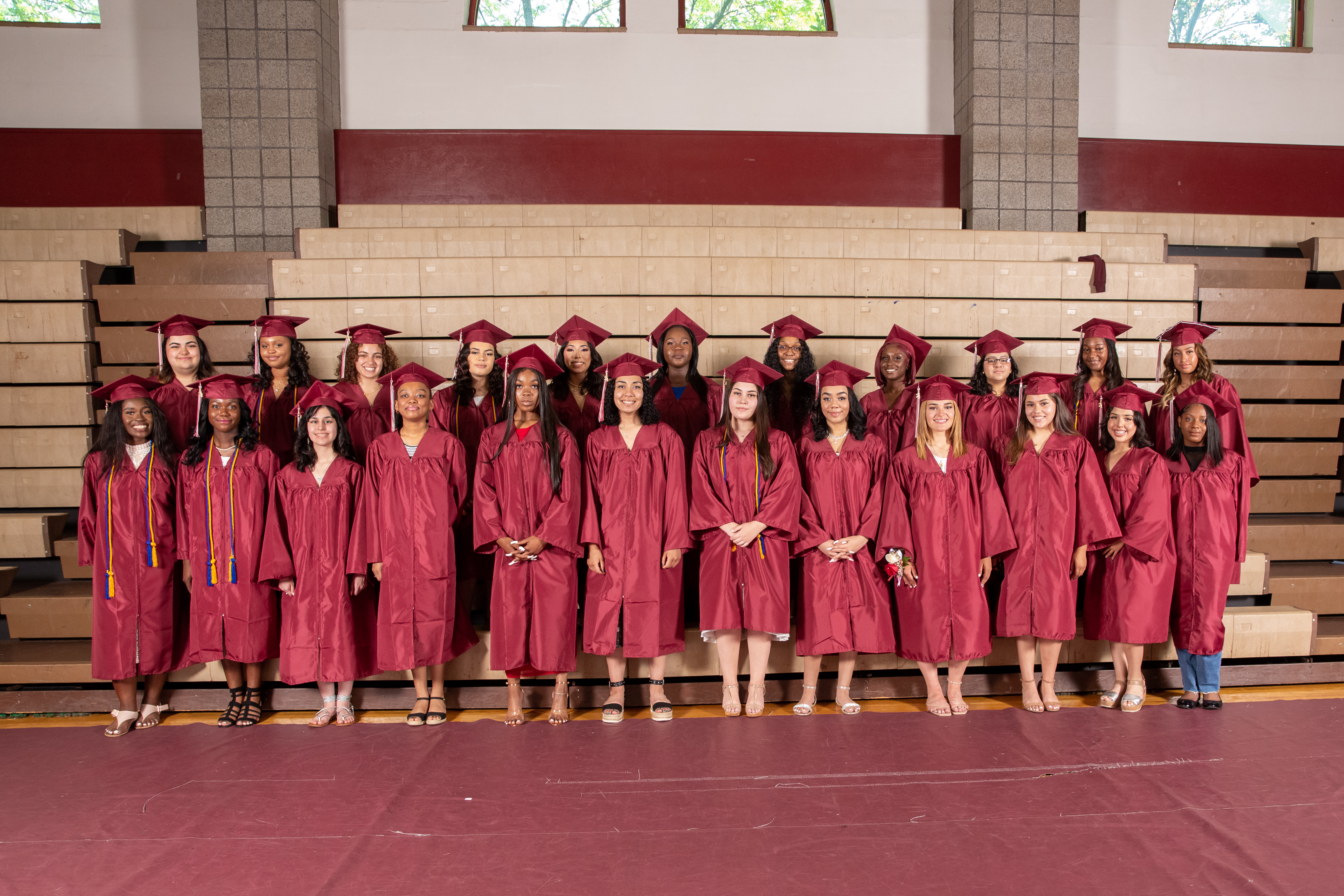 Celebrating their very first commencement on June 5, the Girls Prep Division’s graduates were cheered on not only by their families and former teachers, but also by their sisters, members of the Benedictine Academy Class of 2020. These young women relentlessly worked to make sure that their BA sisters would have a place at a Benedictine school, after their own closed its doors in 2020. No matter that women had never attended St. Benedict’s Prep; they persevered. And now 23 have St. Benedict’s Prep diplomas and the number is nearing 50 for the incoming freshman class.

Valedictorian for the Girls Prep Division, Adelynne Antillus ‘21, who will attend Rutgers University-New Brunswick to study computer science, noted that she wasn’t always sure a Girls Division would work out. “But as long as you really work at something, you can make it come true,” she said. “And I made it – we all made it.”

In introducing the Commencement Speaker and English teacher for the Girls Prep Division, Char-Lotte Searcy, Fr. Edwin reminded the assembly of the reason St. Benedict’s Prep remained St Benedict’s Prep when it reopened after being closed for a year in 1972.

“We had no intention of reopening an institution called St. Benedict’s Prep,“ he said. “But at an early parents meeting, Carl Lamb Sr. questioned: ‘How come it was good enough to be St. Benedict’s Prep when it was all of you...but now that it is all of us (a primarily Black and Latino group of students and families), it’s not?’ ” According to Fr. Edwin, St. Benedict's Prep was back the next day. 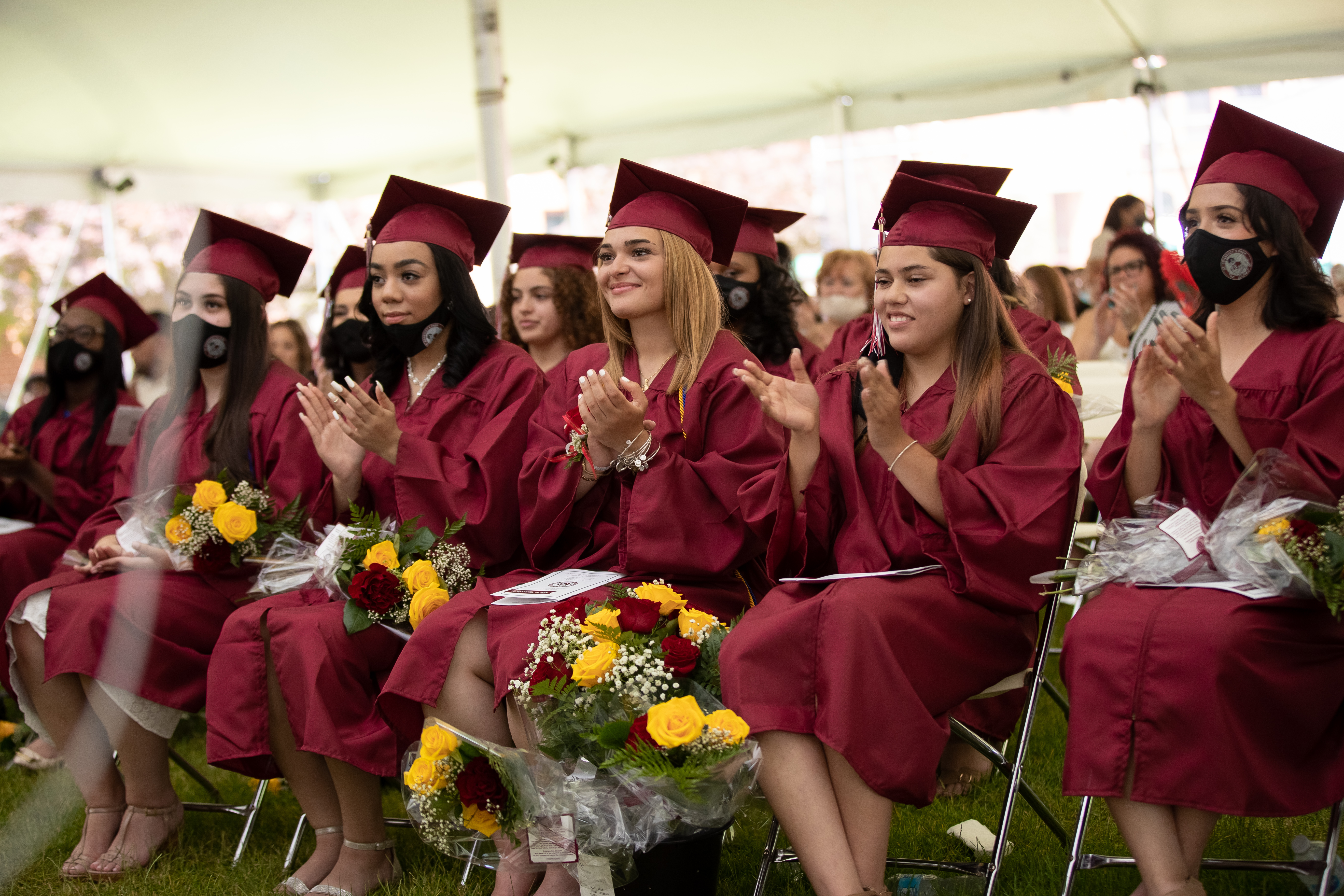 Mr. Lamb’s question heralded a new beginning for St. Benedicts. And last year, a demand from Ms. Searcy generated another beginning. After weeks and weeks of arguing, cajoling, and pleading, the young women from Benedictine Academy seemed to be losing their battle to be accepted at SBP. The powers-that-be, mostly men, were not convinced that it could work. There was not enough time. Ms. Searcy, a powerful advocate for the young women, confronted Fr. Edwin. “You know everyone in this town,” she said, “C’mon Fr. Ed, do something for these girls.” It was her demand, like Mr. Lamb’s question, that changed the course of St. Benedict’s.

When a joyous Ms. Searcy practically danced to the podium, she remembered her father admonishing her to take time seriously. And she urged the graduating seniors to take their time seriously.  “What does time mean to you?” she asked. “Time is not wasted on what you are passionate about,” she told them. “Your parents wasted time on you; learn to waste your time on your passions, on what makes you happy.”

In the Farewell address, always delivered by the Senior Group Leader, SGL for the Girls Prep Division, Agnes Aghanwa’21 exulted, “Here we are – the first!”

“We have earned our place here,” she said, “and have the diploma to show it...We are proof of how powerful the determination of women can be. Last May, 60 girls wanted a place we could call home...our goal was to create a safe haven. We made every place we were in, our own.”

She thanked the teachers for their openness and Fr. Edwin for trusting that these teenage girls could run their own division. She thanked the Dean of the Girls Prep Division, Analisa Branco BA’00, for  “always being there for us.” Finally, she thanked “my sisters...who forever more are known as Benedict’s women.”

After the ceremony, an emotional Ms. Branco said, “I’ve learned a lot from a bunch of kids: don’t settle for average, because anyone can be average. Instead strive for excellence, fight for the underdog, get recognized because you fight along, not stand on the sidelines – anyone can be average – but it takes grit, dedication, humility and compassion to be a Benedict’s woman.” 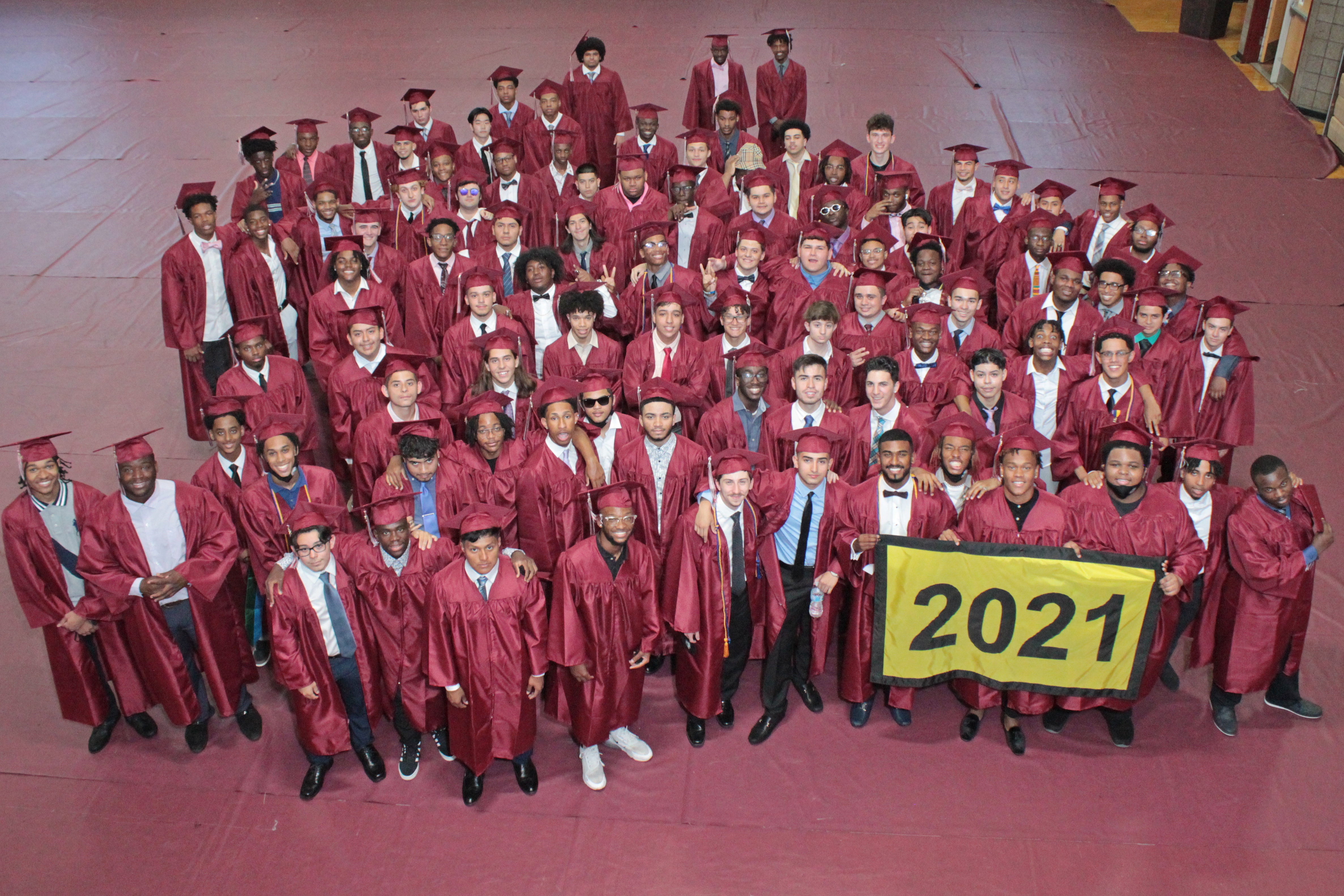 The Boys Prep Division Commencement, always the first Sunday in June, was also held in that huge tent under a baking sun. Undaunted by the heat, the 100 students able to be present marched in to the traditional Pomp and Circumstance played by music teachers, Jeremy Fletcher, Ed.D, and Joshua Mauldin. Again Fr. Edwin welcomed everyone, giving shout outs to the multitudes – Asian, African, South American, Canadian, Christian, Hindu, Muslim and Jewish students and families – who make up the Benedict’s “Big Tent.”

Jerry Miraval ‘18, a rising senior at Boston College and the freshman leader for the Class of 2021, took the graduates through the call and response exercise they learned as freshmen. They didn’t miss a beat.

In his Salutatory Address, Sam Pineda ‘21, who will attend Seton Hall University, reminded his classmates of the challenges they all faced this year, from taking virtual classes and activities to not having a prom to missing just hanging out together. But he congratulated them on sticking together, as Benedict’s men do. And he told them, “ We got to keep loving each other; we got to keep loving  Benedict’s and when we go into the next phase of our lives, we have to bring the togetherness and the love that we shared at St. Benedict’s with us.” 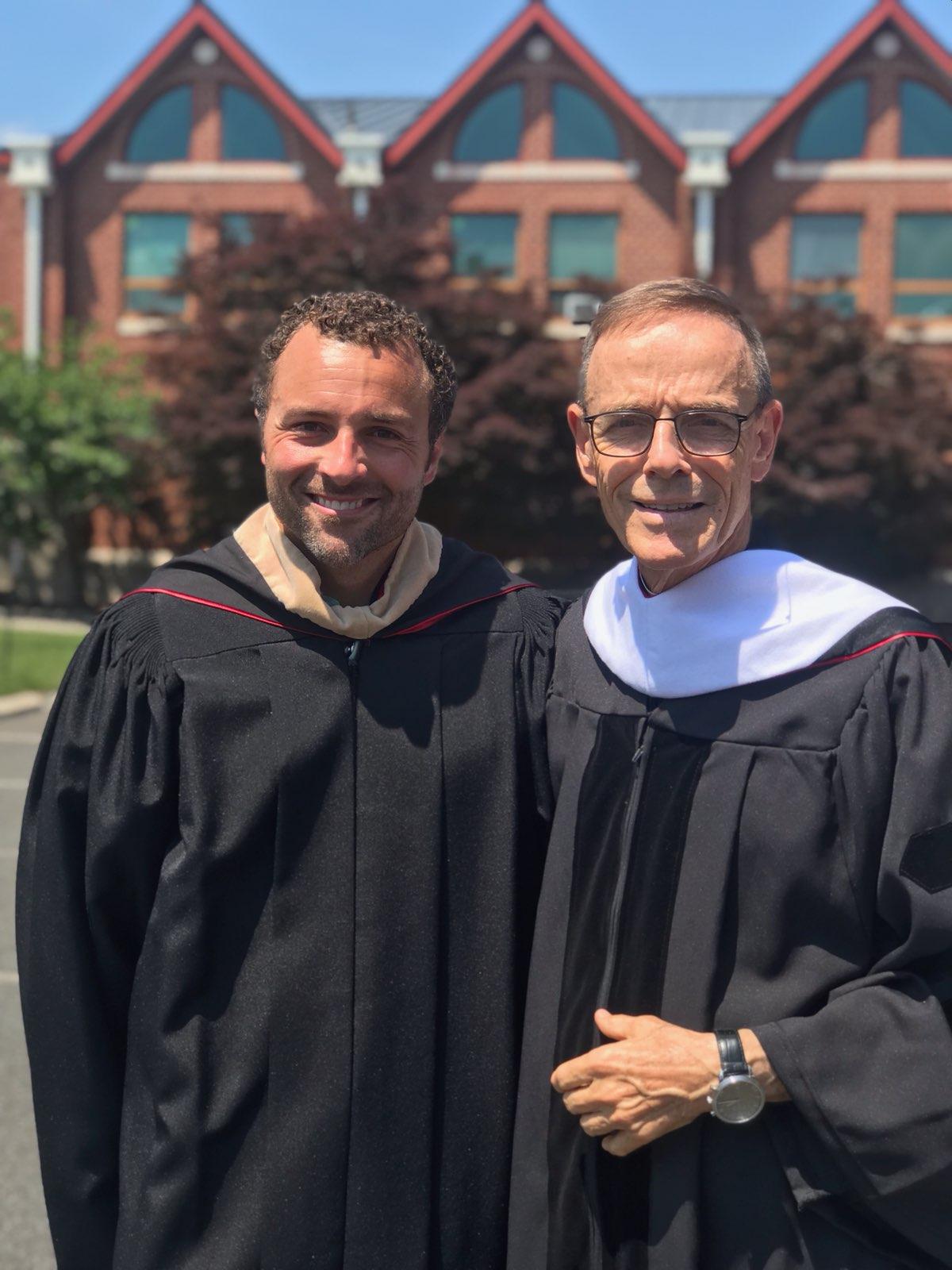 After the conferral of diplomas, Fr. Edwin introduced the Commencement Speaker, Chris Howe, a former Navy SEAL and member of the leadership team of Victory Road, the leadership development group that has worked with St. Benedict’s for a few years. Howe, who had an illustrious career as a SEAL but chose to emphasize the many failures in his life, coincidentally echoed Ms. Searcy’s address of the day before. “Time,” he said to the graduates, “is your most valuable resource...You have a finite amount of time on this planet.”

Rather than wasting time or just spending time, Howe urged the graduates to invest their time, be great and find their passion. He reminded them that this day, June 6, 2021, was the 77th anniversary of the Allied troops landing at Normandy, France in World War II. And at that treacherous landing, those who hesitated were almost instantly lost. Today, 77 years later, he said, “Don’t you hesitate. You have the opportunity to leap into history. Pursue what it means to be men of Benedict’s.”

Before he left the stage, Howe asked Senior Group Leader Sunil Das ‘21 to join him, and pay a debt owed from a promise made during a recent leadership training. In exchange for a giant box of Oreos Sunil wanted for his team, he agreed to do twenty pushups with Howe. The catch was the time – he had to do them wherever Howe asked. Now was the time. In full graduation regalia, Sunil joined Howe; they dropped and counted twenty in unison to the delight of the audience.

The graduates singing the songs of praise by the late Rev. Peter Winstead has become a commencement staple; and the Class of 2021, which was together for only one live convocation the whole year, brought passion, energy and joy to this last time they would sing together.

When Das came back to the stage for his Farewell address, he was greeted with sustained cheers.  Smiling broadly at his classmates, he recalled their early days during a particularly difficult freshman overnight when, after spending four days with complete strangers, they began to come together as a class. He mentioned his own growth from a shy freshman to his current position of confident leadership. He remembered the gifts and contributions of their teachers, the late Spencer Vespole ’09 and Bill Petrick. He congratulated his classmates for leading the school through the most difficult year at St. Benedict’s since it reopened. And he told his friends that today for sure, after walking across the stage, “We are Benedict’s Men.”

After the singing of the Alma Mater and the final blessing by Br. Patrick Winbush, O.S.B., the time for graduation was over. The members of Class of 2021 filed out of the tent, having  taken the time to celebrate their achievements and thank their parents and teachers for the precious time they spent with them. It was time to leave St. Benedict’s and bring their many gifts to the world beyond 520 Dr. Martin Luther King Jr Blvd. in Newark, New Jersey.

“This was an extremely beautiful event,” said Analisa Branco, dean of the Girls Prep Division. “It was the first time all the girls and their families were together in the same place and on the grounds of St. Benedict’s – many for the. A beautiful recognizing and honoring  such a wonderful class of Pioneer Women!” 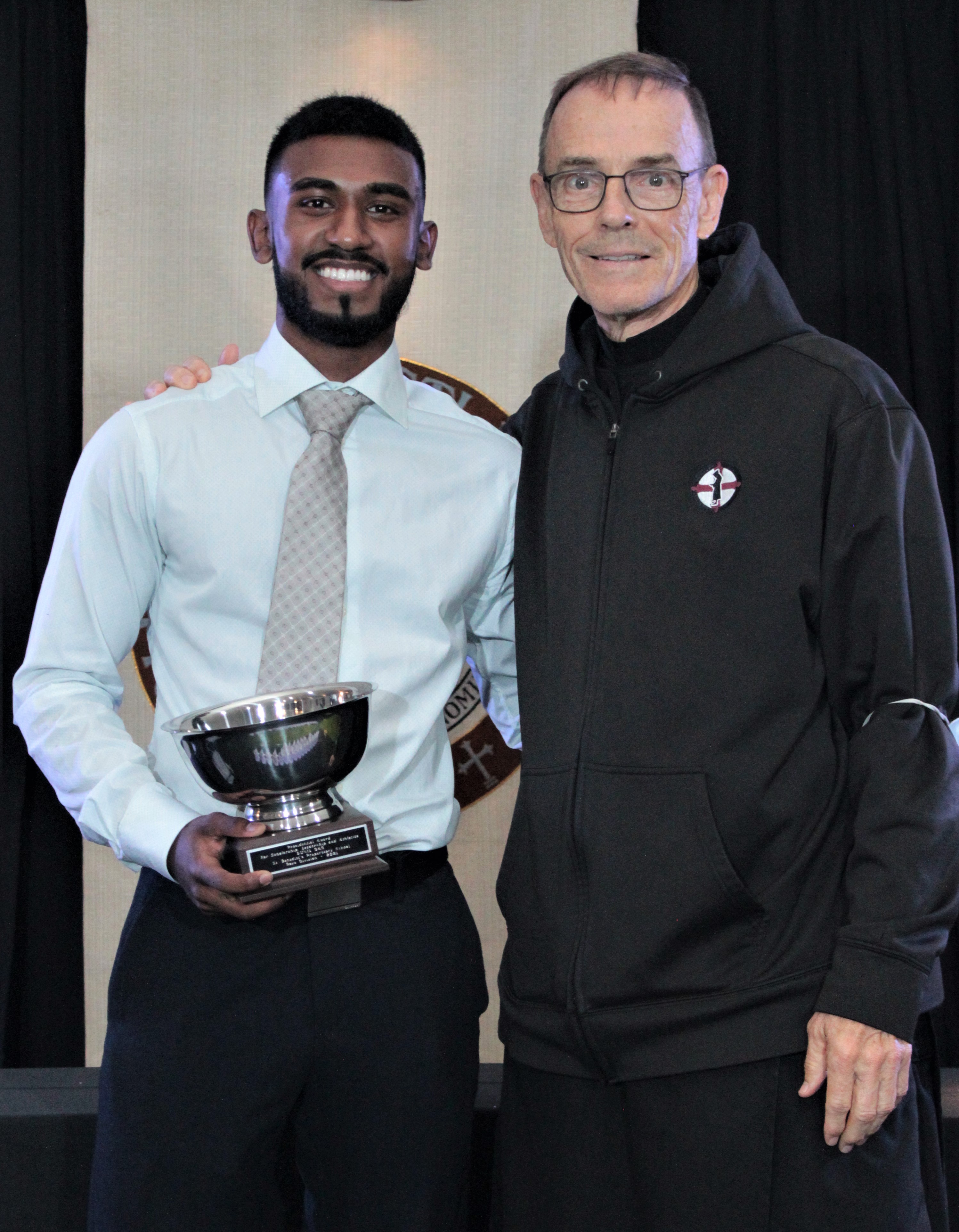 “To be honored with the Presidential Award as a cap to my career at The Hive is a reflection of my consistency and growth over the last four years,” said Das, this year’s Senior Group Leader and class valedictorian. “But The credit for holding the school together for this long (during a pandemic) definitely goes to my team of 7 other senior leaders and the 18 group leaders. Without them, I don’t get this recognition. It’s and honor, and I am grateful.”