COMMENCEMENT 2022 – AN EMOTIONAL AND MEMORABLE CELEBRATION FOR THE GRADUATING SENIORS

Maybe it was the exquisite late spring weather, with its gentle breezes cooling the huge tent on the Leahy House lawn. Or the inspirational talks of the two New Jersey State Troopers, the Commencement speakers. Or the newly elected Abbot Augustine Curley, O.S.B. and other monks spontaneously joining the graduates, arm-in-arm, singing and swaying to Rev. Peter Winstead’s Convocation favorites. Probably it was all of this and more – the 119 members of the Boys Prep Division and the 31 members of the Girls Prep Division, the Class of 2022, celebrating the culmination of their time at the Hive and the completion of a high school career marked by changes, interruptions and, yes, many achievements – that made these Commencement ceremonies on June 4 and 5 so emotional, and memorable. 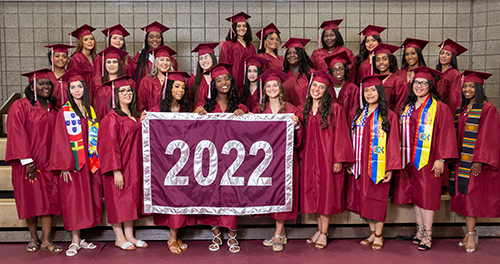 Giulia Gallo ‘22, the Valedictorian of the Girls Prep Division, noted that the majority of the graduating class had begun their high school careers in other places. And with school closings and changes brought by the pandemic, these 29 young women found St. Benedict’s. She reminded her classmates and their families that choosing St. Benedict’s was their way of showing the world that they would not let fear hold them back. “St. Benedict’s,” she said, “came to enlighten us in our darkness…and now we have become light ourselves. I urge us today to take this light wherever light will take us.”

View photos of the Second Commencement for the Girls Prep Division

Senior Group Leader of the Girls Prep Division, Marie-Rosa Jeudy ’22, reminded her classmates of the hardships they went through and how they overcame the obstacles of the last two years. “After a unique year at St. Benedict’s Prep, every last one of us has grown to be a strong, persevering young woman because of how much this school has prepared us for the world ahead of us.” 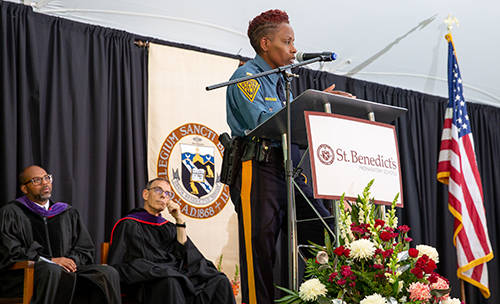 New Jersey State Trooper Lt. Stacey Lloyd, who gave the Commencement Address, knows something about overcoming obstacles. A Newark native who grew up in public housing on Dr. Martin Luther King Jr. Blvd. was homeless at 15. Her father died in prison and her mother’s abusive partner lived with her for more than 10 years of her childhood. Her home was riddled with alcohol, food scarcity and neglect.

“I lived in a neighborhood where no one expected anything of me,” she said. But her strongest desire as a young person was to help kids believe in themselves when no one else would. Clearly, she believed in herself. Now with a Ph.D. in Philosophy, she is pursuing a second Ph.D. in Psychology. Her academic and social accomplishments are numerous, including over 18 years of service as a New Jersey State Trooper. The mother of three sons, she urged the young women of St. Benedict’s not to wait to be a force for change: “Move into your future knowing you are bold, powerful and influential individuals who have the ability to accomplish anything.” Lt. Lloyd would know.

The ceremony for Boys Prep Division – four times the size of the Girls – unfolded again in the packed tent on the Leahy House lawn. The familiar ceremony was identical to the Girls with two exceptions. Their Freshman Leader Juan Garcia ’18 reminded the graduates of their first struggling days during the Freshman Overnight and Jose Estrella ‘17, the last Lower Division leader for some of them, wished them well.  And Headmaster Fr. Edwin Leahy, O.S.B. ‘63 and Fr. Albert Holtz, O.S.B.’60 introduced members of the 50th Anniversary Class, the Class of 1972 – the last class to graduate from the old St. Benedict’s Prep, and at the time, thought to be the last class that would ever graduate.

Valedictorian and Presidential Award winner Andrew D’Arcy remembered how alone he felt as a new freshman, walking through the 520 doors. He had been uncomfortable leaving his familiar home at the shore to come to Benedict’s. But here, he said, I found a new home. We all found ourselves. We are forever Benedict’s men from this day forward.” He asked God to bless the Class of ‘22 and said, “I love you guys – and remember, we are never alone.”

View photos of the 148th Commencement for the Boys Prep Division

New Jersey State Trooper Alan Laws was invited by Fr. Edwin to address the graduates from the Boys Prep Division. Tpr. Laws, who grew up in a loving, supportive family, but in a challenged neighborhood, had participated in the Building Bridges Program here with some of the graduates. A lifelong runner, Tpr. Laws admitted to feeling “without a plan or purpose” when he graduated from Delaware State University, which he attended on a track scholarship.  But after a few years of doing odd jobs, he decided to apply for the New Jersey State Police. Of the more than 13,000 applicants, only 200 were accepted. Tpr. Laws was one of them. In his talk to the graduates, he urged them to find a purpose, to start preparing now. Warning them that desire without discipline is a delusion, and added that potential means nothing without purpose. 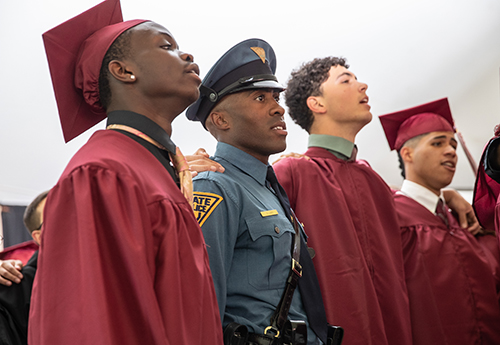 After a rousing rendition of Convocation songs led by Glenn Cassidy, Ed.D.’90 and spontaneously joined by Abbot Augustine and a number of the monks and the guest State troopers, all locking arms with the Class of 2022, Senior Group Leader Justin Crespo ’22 took the stage for the last word. He told stories – from his class’s progress from frightened freshmen to empowered seniors, stories of his father’s death when he was a UDII and the support he got from his Benedict’s family, stories of getting through the pandemic and the adventures of virtual learning. After reflecting on his Benedict days, he said he understood why it was so hard to say goodbye: “The people in this community, my fellow graduates sitting in front of me, the alumni who have come before us and those who will come after us, we are all one huge family,” he said. “And we don’t say goodbye to family, only see you later.”

And so, it ended. The gatherings under the tent. Fr. Ed had made a point of explaining the Biblical genesis of tent gatherings; the tent that held the Arc of the Covenant was where Moses went to meet God and ask for God’s blessings on the people of Israel. And the Black church has long had tent meetings to bring the faithful together. In early June 2022, the Benedict’s community had gathered once again, and for the second year, in the tent to celebrate the newest alumni and alumnae and to ask God’s blessings on this special community in Newark and beyond.

Below is the list of the Senior Award winners for both the Boys and Girls Divisions presented at their respective Senior Awards Dinners on June 1 and 2:

Award for Achievement in English and Literature:Troi Ashley Slade.