BENEDICT'S HATES A QUITTER: A MOTTO THAT TAKES ON A WHOLE NEW MEANING FOR CORY ARIAS
St. Benedict's recent graduate battles through a near-fatal accident in miraculous fashion

Just a few days away from graduation, Cory Arias ’20 suffered a near-fatal electrocution on June 3rd during a family vacation in Mexico. Arias, while painting a house with his cousin, came in contact with some low-hanging power lines, and the surge through his frame caused second- and third-degree burns to 90% of his body.

Cory doesn’t remember a thing about the accident. He had blacked out upon contact with the wires and didn’t wake up until hours later in a Mexican hospital. His parents told him the massive stream of electricity through his body caused a violent explosion.

“I don’t remember what happened,” recalled Arias. “When I woke up in the hospital, I was calm, but I knew it wasn’t good.”

Cory’s mother, Angelica, didn’t explain to her son, at first, how bad his condition was, only saying that he fell from the second-floor from where he had been painting at the family’s vacation home. Eventually, and rather quickly, Cory realized how dire the circumstances were.

“Soon as I tried to move, the pain was excruciating,” said Cory, who ended his virtual classes at St. Benedict’s only a day earlier. Now, instead of being part of graduation preparation, he was fighting for his life in the hospital.

Cory was flown back to the U.S. only two days after his accident and began treatment at Westchester Medical Center, about an hour’s drive from his home in Newburgh, N.Y.

That’s when St. Benedict’s motto of “Benedict’s Hates a Quitter” became a bigger part of his everyday regiment, saying, “It’s always there and you live by that. It meant a lot to me in school, but now it took on a whole new meaning and I think about it every day.”

Cory, although in-and-out of consciousness, managed to catch part of The Hive’s Virtual Commencement on June 7th, including when Fr. Edwin and his former rowing coach, Craig White, sent their prayers and well wishes, along with other faculty members. Our Headmaster said the class of 2020 wouldn’t be whole again until Cory could join them.

“I was really down at that point and was very surprised when Fr. Ed mentioned my name,” admitted Cory. “That helped a lot. I honestly think all the support from St. Benedict’s helped me out more than people will ever know.” 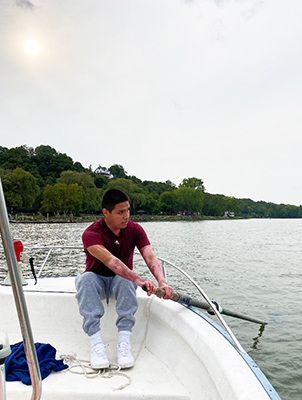 Cory underwent his first of six grueling operations two days after graduation, took his first steps on his own July 2nd, and was supposed to undergo four to six months of grueling rehabilitation. That Benedict’s Hates a Quitter fight, though, and his mother’s impetus, were the main reason Cory left the hospital after only two months.

“All the surgeries and rehab were really hard to take,” he admitted. “Honestly, sometimes I didn’t know if I would get through it. But my mother was with me the whole time and she wouldn’t let me get too down. She was rough at times – no complaining or making excuses. I knew I wouldn’t quit, but that extra push really helped me.”

Cory’s miraculous recovery – he’s no longer in rehab nor taking any medications – was fully realized when he received a job in September, just a little over three months removed from his horrific accident. He’s now coaching the rowing team at his former middle school in his hometown, San Miguel Academy. Cory picked up rowing while at San Miguel and continued to row at St. Benedict’s, where he was part of Coach White’s Varsity 8+ team.

“I’m ecstatic he’s alive first and foremost. I think his guardian angel must have been working overtime,” said Fr. Edwin. “The Lord’s plan was to keep him here with us – possibly so Cory can be around to help others. But the determination on his part is unbelievable.”

“I give thanks to God every day that I’m still here – it’s a miracle,” said Cory.

As for his future, Cory wants to keep getting stronger – he’s slowly getting back into the gym – and fulfill his dream of attending college next year at Virginia Military Institute. In the meantime, he is leading by example.

“I just want to show people, no matter the situation, you should never give up. I’m trying to motivate others who need it and I can tell them that I’ve been through a battle of my own – my body shows it. I have the scars to prove it.”