Share to FacebookShare to TwitterShare to LinkedInShare to PinterestShare to Email
Doc Hannon, whose "retirement" continues to this day, is introduced as latest inductee to our Hall of Fame

"DOC" HANNON INTRODUCED AS OUR LATEST INDUCTEE TO SBP'S HALL

Some folks move to Florida or other warmer climes for retirement. But when Martin J. Hannon, Ph.D. H’06 decided to retire after 31 years from the Celanese Corporation, he headed for Newark. “Doc,” as everybody calls him, became a revered math teacher and track coach at St. Benedict’s in 1999. His “retirement” continues nearly 25 years later as he helps with the cross country and track teams to this day.

A self-described “New York City boy,” Doc grew up in Queens, graduated from Bishop Loughlin High School in Brooklyn, earned a Bachelor of Chemical Engineering degree from Manhattan College, and a Master of Science degree from Case Institute of Technology, which later became Case Western Reserve University, where he earned a Ph.D. in Polymer Science and Engineering.

After earning the Ph.D., Dr. Hannon joined the Celanese Corporation, a global chemical leader in the production of differentiated chemistry solutions and specialty materials, where he spent 31 years. During that time, he was responsible for 13 United States patents. While at Celanese, he worked with Don McCabe, Ph. D., father of former Dean of Academics at Benedict’s, Thomas A. McCabe H’02, who introduced him to Newark’s Blessed Sacrament Church, where Headmaster Edwin Leahy, O.S.B. ‘63 often celebrates Mass. Dr. McCabe also told Doc that St. Benedict’s would be a great place to work. He began attending Mass at Blessed Sacrament and, as his retirement approached, Doc considered applying to teach at Benedict’s.

Qualified to teach chemistry, physics and math, he decided he preferred math and, as luck would have it, when Doc applied for a position, math and physics teacher John Ryan ‘88 was moving to Boston. The job was Doc Hannon’s; he taught algebra, precalculus and calculus, until leaving the classroom in 2018. 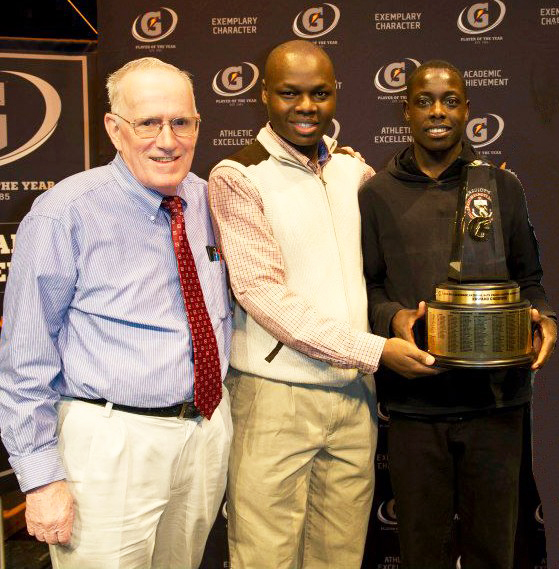 But this excellent and demanding math teacher also made his mark on the track team. He had always loved track and had run middle distances and cross country in high school and college, and even competed in a New York City Marathon later in life. So, he signed up to help out head coach Keith Corpus H ’02.  A year later, however, Corpus, who was also Faculty Dean, became the father of twins born prematurely and had to stop coaching. Doc Hannon took over as head coach. “It was baptism by fire,” he said. “But I loved coaching.”

And coaching suited him too. His tenure as head track coach is marked by some remarkable team and individual achievements. One team high point, he said, was the Sprint Medley Relay National Championship won by the team of Bryan Scotland ‘05, Sean Vison ‘05, Marc Robinson ’07, and Brian Bucknor ‘08. And Brandon Jarrett ‘08 went to Nationals in Cross Country twice, in 2011 and 2012. And of course, there is Edward Cheserek ’13, whose story illustrates not only his drive and talent, but also Doc Hannon’s unfailing and relentless support of kids who need a chance.

With then assistant coach Geoffrey Chelule Ngetich, Doc Hannon met with the former’s Kenyan friends who had connections to Stadi za Maisha, a faith-based charity started by Maryknoll missionary Rev. Richard Quinn and dedicated to the well-being of children and youth education in Kenya. After helping the Jersey City Kenyans organize a fundraiser for the charity, Chelule and Hannon were asked if they could offer an opportunity for one of the kids known to the organization. After the student came to Benedict’s and did just fine, the coaches were asked if they would take another student. That student was none-other than Cheserek ‘13, now a professional distance runner, who won 13 national scholastic championships before going on to shatter the NCAA mark for National titles (17) while at the University of Oregon.

Originally from the Rift Valley in Kenya where he herded cattle for other families, and lived with his family in a thatched home, Cheserek takes care of his family, who now live in a new, solid and modern house. Doc Hannon is as proud of that as he is of all Cheserek’s track accomplishments.

Besides his St. Benedict’s track family, Doc Hannon and his wife Sandy have two children, Theresa Hannon Cooper, who lives in Sunnyvale, California, and Brian who lives in Amsterdam. They are also grandparents to Rebecca, Theresa’s daughter, who is almost three.

These days, Doc Hannon is at Benedict’s at least once a week. He helps out with practices, timing the kids and doing splits, and he drives the team bus to meets. He still loves it. “It keeps me involved with the kids,” he said. “We have great kids, hundreds of them. Not everyone can be a superstar. But they are all part of the team. It’s all about the team.”