FENCING SEASON RAMPS UP FOR THE GRAY BEES

Following a year of constrained practice and competition due to COVID-19, St. Benedict’s Prep Fencing is gearing up for its new season. This year’s roster boasts 28 new and returning fencers, including five young women on the girl’s foil squad, a first in program history. 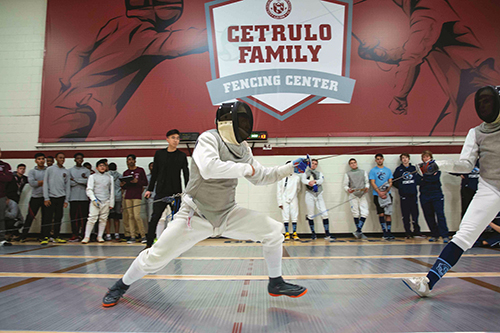 “It’s great that we can all be back together,” said fencing coach Rich Molina ’06.

Last year, Molina and his coaching staff did all it could to keep students involved in the sport, but workouts consisted of fewer students and were limited in scope. Once the St. Benedict’s community returned to the property for in-person learning for Summer Phase in late July, Gray Bee fencers were able to resume their normal training regimen.

“Practices are back to being dynamic, fun, and engaging,” said Molina, who leads the program with assistant coaches Elliot McFarland ’12 and Dexter Lopina ’98.

St. Benedict’s is the only Newark high school with a competitive fencing program. The sport was once as ubiquitous as soccer in Brick City but nearly disappeared by the late 1960s and early ‘70s. St. Benedict’s helped revive the sport in Newark when it began its modern-day program in 1985. It quicky grew in stature and standing even though 99 percent of Gray Bee fencers are brand new to the sport. Coaches Derrick Hoff H’96 and then Jim Wandling ’92 and Jeff Austin ’96 found ways to turn the disadvantages into advantages.

“Fencing taught me so much about how much you can actually accomplish with hard work and perseverance,” said Molina, who had never fenced prior to attending St. Benedict’s. An épéeist, he went on to fence at Notre Dame and took over the St. Benedict’s program in 2016 in addition to his duties as physics teacher. The lessons coach Molina learned as a student are ones the program strives to instill in all young men, and now young women, since St. Benedict’s began the Girls Prep Division in 2020.

“Our School motto, ‘Benedict’s Hates a Quitter,’ carries through and is emphasized throughout the program,” added Molina. “On the academic side, fencing helps students become more disciplined with their time. It builds confidence in young men and women, and you learn pretty quickly that you are capable of a lot more than you realize.”

Fencing at St. Benedict’s received a big boost with the addition of the Cetrulo Family Fencing Room, a state-of-the-art facility that opened in 2018. It features the latest technology for training and was made possible by the generosity of Larry Cetrulo, whose family connection to Newark and fencing date back to the early 20th century.

Gray Bee fencers are spending a lot more time in the Cetrulo Family Fencing Room. Training began in earnest in Mid-November when training ramped up to six-day a week practices for the competitive season, which runs through February. Coach Molina describes the 2021-22 season as a year for rebuilding. “Once we start scrimmaging again, we will really be able to take stock of the consequences of the pandemic and how much work we need to do. Our goal is always to be as competitive as possible.”