FR. AUGUSTINE CURLEY NAMED THE THIRD ABBOT FOR NEWARK ABBEY
Succeeds Rev. Melvin Valvano '56, who had been Abbot since 1973

Sitting in an Abbey parlor in late May, Rt. Rev. Augustine J. Curley, O.S.B., remarked that this was the first time in more than 30 years that he was not at Munsee, Newark Abbey’s property in Sussex County, providing support for the backpackers on the Appalachian Trail project, and cooking for the support staff. As the newly elected Abbot of the 16 Benedictine monks living at Newark Abbey, he realized he couldn’t be away for a whole week so soon after the May 12 election that installed him as the Abbey’s third Abbot.

“I didn’t want them to think I wanted to get away,” he said smiling. 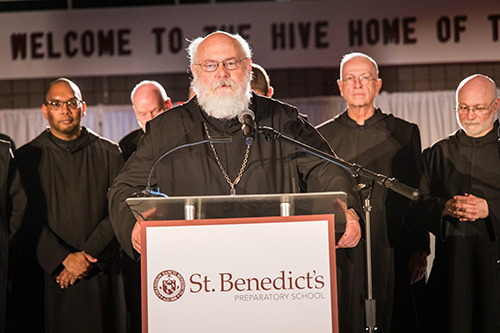 Months of preparation had preceded the two-day election process with all the monks meeting weekly, often inviting members of the larger community to join them. They talked about what their community needed and how to address the challenges presented by the growth of the school, the needs of the public oratory, St. Mary’s Church, and the role of the monastic community in the larger local community.

Abbot John Klassen, O.S.B., of St. John’s Abbey in Collegeville, Minn. and President of the American Cassinese Congregation of which Newark Abbey is a member, presided over the election. Two electors counted the votes of the capitulars, the 14 monks who have taken solemn vows and therefore eligible to vote; Abbot Augustine was elected on the fourth ballot. He succeeds Abbot Melvin Valvano, O.S.B. ‘56, who had been Abbot since 1973.

After the election, Abbot Augustine said, “Everybody comes together. My title is Father; [as Abbot] you have a lot to take care of,” he said. “These adult men choose you to be their spiritual head”.

Although his elevation to Abbot is immediate after the election, there will be a “Blessing” ceremony sometime late in July or August, so the St. Benedict’s students can also attend.

One of seven siblings, Abbot Augustine spent his early years in Livingston; the family moved to Belleville soon after his father died when Abbot Augustine was nine. He graduated from St. Peter’s Grammar School there and entered St. Benedict’s Prep as a member of the class of 1974. But when the school closed in 1972, he transferred to St. Peter’s Prep in Jersey City. He spent only one year there before enrolling at Assumption College in Worcester, intending to major in French.

After graduating from Assumption with a double major in politics and philosophy and a minor in studio art, he was awarded a teaching fellowship from Boston College where he spent five years and earned a Ph.D. in Philosophy.

While still a student at St. Benedict’s, Abbot Augustine had realized he had a vocation and spoke with then Fr. Melvin Valvano, O.S.B., Fr. Benedict Tyler, O.S.B., and Fr. Maurice Carlton, O.S.B., about his hopes to perhaps become a monk. Over the ensuing years, Abbot Melvin would reach out to him. He kept sporadic contact with the monks until 1982, when he realized that his vocation was to the monastery.

In June,1982, James Curley came to live at Newark Abbey. In 1983-84, Br. Augustine Curley, O.S.B., made his novitiate, pronouncing simple vows on September 15. By these vows, he promised to be faithful to the monastic life for three years. At the end of that time, he asked to confirm his commitment by making solemn vows, by which he promised to live the monastic life at Newark Abbey for life. Having been accepted by the monastic community, he professed these vows in October, 1987. He was ordained to the priesthood in 1988.

Since then, Abbot Augustine has fulfilled many roles in the monastery, in the School, and in the greater community. Having been the Prior for about 12 years, he has experience taking care of the everyday needs of the monastery. He will have to appoint another monk to fulfill that position.

His responsibilities as Abbot are many. Of course, he opens the prayers monks participate in six times a day, but he also must listen to the needs and opinions of all the monks. He will remain a member of the New Jersey Catholic Historical Commission and of the Board of the Newark History Society, and is writing a book on the history of St. Mary’s Parish; but he has to give up writing book reviews for the Library Journal.

As the face of the monastic community, Abbot Augustine is committed to Newark Abbey remaining an important part of the Newark community and intends to reach out. “We are here because God put us in Newark,” he said. “We are a presence in Newark; we will continue to be a presence.”

He admits that being the Abbot takes some getting used to but said he is slowly realizing that it is real. He wants to remain a part of St. Benedict’s Prep and is looking for an office in the school so he can be available to the kids. For years, he has been called “Father Goose” by the students. And when his election was announced, Justin Crespo, the Senior Group Leader, asked him if it was OK to call him Abbot Goose. And, of course, Abbot Augustine laughed and said it was.