History teacher and chairman of the History Department, Richard Gallerani, drew cartoons to amuse his parents during the long, isolating days of COVID-19 during the summer of 2021. Using the news, the shut-down, fear, and vaccines may seem unlikely fodder for humor, but Gallerani finds absurdity ubiquitous and irresistible. And when he stumbled upon the Sketchpad program on his laptop and taught himself to use the program, he realized his cartooning could take a giant leap forward. 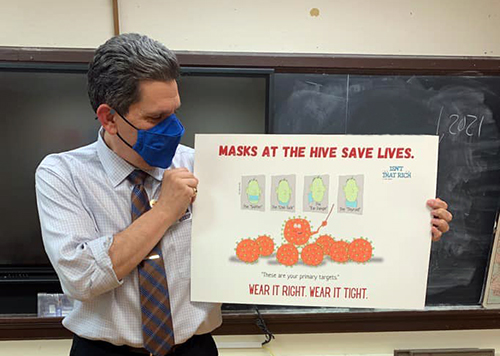 Gallerani, who is also an accomplished woodcarver, has been cartooning since he was a kid. He honed his skills when he was a seminarian and member of the Society of St. Edmund at Notre Dame Seminary in New Orleans drawing cartoons for the Clarion Herald, the New Orleans Catholic Newspaper. One of his cartoons, of two catfish in heaven, one of which brags that he had been served at Commander’s Palace, a New Orleans landmark.  The cartoon caught the eye of the owners of Commander’s Palace and was later framed and displayed at the restaurant, which was destroyed in Hurricane Katrina before being rebuilt.

Although Gallerani  never really abandoned cartooning, he did set it aside to pursue wood carving over the past 20 years. But his colleagues knew he was still at it when his hilarious and often pointed “Chalk Talk” cartoons would appear on the old faculty lounge bulletin board. Then, last summer, at home with his parents in western Massachusetts, the cartooning bug bit him again; it was an outlet for reactions to the COVID pandemic. He played around with using masks as characters and finally settled on the COVID-19 molecule - an orange sphere with green spikes all over it and a wildly expressive face. Thanks to Sketchpad, the little molecule came to vivid life.

Now he draws every night after dinner and on weekends. Gallerani gets inspiration from the news, from pundits, from comedians like John Oliver; he admires Looney Tunes and Tom and Jerry. “I enjoy the personifications of inanimate objects,” Gallerani said, and names Gary Larson and Art Speigleman as his “cartoonist” heroes. And Jack Hamm’s book, Cartooning the Head and Figure, is his “cartooning Bible.”

The historian in him sees the role of cartoons today as similar to the role of the court jester in the Middle Ages. His cartoons “poke fun and criticize people; they take issues and bring them to people’s attention in a healthy way,” he said. But he is acutely aware that cartoons have not historically always been benign. As a history teacher whose classes include History of the Holocaust, Gallerani has shown his students how the Nazis used cartoons in a notoriously anti-Semitic newspaper to vilify the Jewish people. “Images have power,” he said.

His COVID cartoons have an enthusiastic following among students, teachers and administrators at Benedict’s, and friends from all over. Associate Headmaster for Academics Michelle Tuorto H’16 asked Gallerani to have posters made of a cartoon that had an important message for the students – wear the mask properly! Now thanks to Science Department Chair, Dennis Lansang M.D. H’18, large, full color renditions of the cartoon are displayed around the school. And Gallerani is planning to self-publish a collection of the cartoons and also have buttons made.

“My hope is that making light of something so serious, creating humor in the darkness, will subtly change peoples’ minds. You have to see the truth behind the humor,” Gallerani said. “I use the art to communicate the message – it’s lighting a candle instead of  cursing the darkness.”