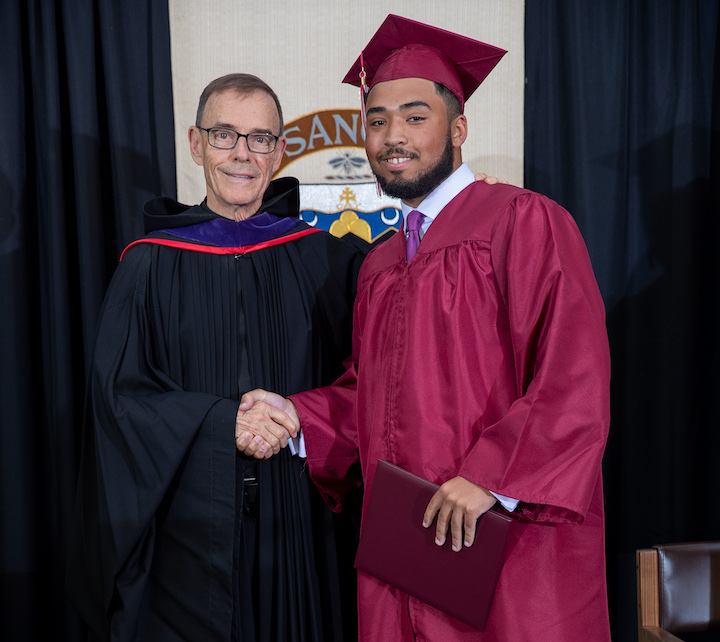 Over the course of two seasons, Alexander Benanti ’22 learned the ins and outs of caddying through a relationship St. Benedict’s Prep established with the Baltusrol Golf Club in Springfield, N.J. In May, the recent Gray Bee graduate, who is headed to Rochester Institute of Technology (RIT) this fall, learned he was the recipient of a New Jersey State Golf Association (NJSGA) Caddie Scholarship. The award is $6,000 per year or a total of $24,000 to be applied to his undergraduate education.

“I was very honored and humbled to learn I received the scholarship,” said Benanti who plans to study motion picture science at RIT, a program that combines engineering with the arts to prepare students for careers in film, television and animation production. He knew little about golf when he entered St. Benedict’s in eighth grade after attending Clifton public schools. Dean of Freshmen Jared Boone ’13, a Middle Division teacher at the time, introduced Benanti and a few other students to the sport via Golf Club and the group began practicing on a driving range in Newark. A few years later, Benedict’s was formulating a partnership with Baltusrol Golf Club. The goal was to open caddying opportunities to Gray Bees and help them become eligible for the highly competitive Evans Scholarship Program, a full four-year award that includes tuition and housing to a range of colleges and universities for golf caddies with financial need.

Benanti wanted in on the caddie program. Training began the end of his UDI (sophomore) year and as a UDII (junior) he began caddying weekends in the fall and spring and every day in June and July of 2021. Becoming an effective caddie, “Is very similar to The Trail,” said Benanti, who served as company commander for two Backpacking Projects in 2021 and was group leader of Fr. Celestine Staab, O.S.B. “It’s not easy. But if you push through you get it done. It really does help build determination.” A standout student, Benanti is a National Honor Society member, staff writer of Benedict News Online, and member of the swim and water polo teams.

The NJSGA Caddie Scholarship Foundation has provided more than $16 million in college scholarship awards since 1947. Last year, 157 caddies were awarded a total of $665,000 in scholarships. Caddie scholars like Benanti are selected based on their academic performance, financial need, and length and quality of service as a caddie. Scholarships are renewable for up to four years of undergraduate study. The ultimate goal is for Gray Bee caddies to qualify for the Evans Scholarship. “You need 100 loops by the time you apply for the Evans Scholarship,” our Dean of College Seniors. One loop is caddying 18 holes of golf and since St. Benedict’s students have been caddying at Baltusrol for two years, Class of 2022 graduates didn’t qualify. Benanti had an idea to ensure upcoming classes of Gray Bees would qualify for the Evans Scholarship.

“If students caddied every day in May, they’d have 25 loops at the end of the month and be ¼ of the way towards eligibility,” he said. Why not make caddying a Spring Phase project? Benanti discussed the idea with Mr. Jean-Baptiste, who suggested he draft a proposal for the course. Benanti did. The proposal was approved by Associate Headmaster for Academics Michelle Tuorto H’16 and four Prep Division students, including Benanti, participated in the inaugural Spring Phase project. Benanti said the course came together close to the start of Spring Phase, so he expects more students will participate as word gets out. “Next year, there will be a lot more,” he predicted.