Share to FacebookShare to TwitterShare to LinkedInShare to PinterestShare to Email
We introduce Omar Feliciano '97 as the first inductee of St. Benedict's Hall of Fame Class of 2022

"I thought he was my friend!" laughed Omar Feliciano '97, recalling the teenager he remembered as his childhood playmate. Feliciano has joined a prestigious group of Gray Bees as a St. Benedict's Hall of Fame inductee, Class of 2022.

A star wrestler and soccer player at The Hive, Omar's grappling record – 160-20 – places him third on the School’s all-time list for most victories. Years of training, dedication and persistence went into that record, all beginning as a young boy with too much energy for his parents to handle.

As it turns out, Omar's "cool" older childhood friend had actually been paid by his parents to wear him out. Omar's parents felt he was too active coming home from school. So, in addition to enrolling him in wrestling and soccer, his father hired a teenager from their Royal Ranger's church group to take Omar on walks. A fact Omar only became privy to as an adult. "Turns out this kid was my dog walker!" joked Omar. 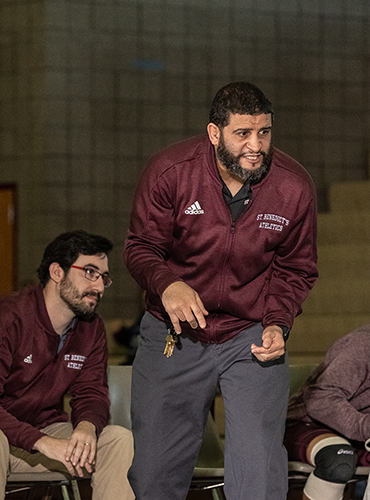 Growing up in Bloomfield, wrestling had always been a family endeavor. Two of Omar's uncles were wrestlers, so it seemed only  natural Omar and his cousin would start wrestling at a young age. They were each other's only sparring partners until their uncle found the Scorpions Wrestling School of New Jersey when Omar was seven. Omar discovered an early talent for wrestling and enjoyed the one-on-one combat. Athletics for Omar's family was, and continues to be, a big part of daily life.

As Omar got older and their family began considering high schools – the choice was simple. For a young student-athlete, dreaming of becoming a professional soccer player, St. Benedict’s was the best – and he wanted to be the best. And with that, at age 14, Omar began his soccer and wrestling journey at The Hive as a dual sport athlete.

In the Feliciano household, doing your best was considered the bare minimum. So for Omar, the transition to SBP was a comfortable one. "My parents always said to me, 'It doesn't matter what you do, just work to be the best at it.' " shared Omar. The 'best' didn't always mean athletics, and the attitude of "work to be the best or don't do it" is something Omar has taken with him into adulthood. He credits this mentality as the cause for his seamless transition into life at The Hive.

"They called me 'the flea,' " Omar said, smiling. A 110-pound ball of energy, he was the smallest student on the wrestling team. Pairing his build with a high voice and a soft-spoken personality, Omar was quickly known around school as "The Super Flea," a phrase forever emblazoned on his varsity jacket and still affectionately used by Headmaster Father Edwin.

Omar went on to athletic success collegiately, recruited to play NCAA Division 1 soccer for Bradley University in Illinois. After graduation, he worked in different disciplines to provide for his family. Eventually, feeling the call back to The Hive to be a coach himself. Wanting the chance to give back to the school that had given so much to him.

"The values and what St. Benedict's expects from students have not changed," stated Feliciano. He remembers every day fondly with his players. His office in the cafeteria was a safe space for athletes who chose to eat most breakfasts and lunches with their coach. "They were just around me all the time. It was the best for me."
Those times with the Gray Bees now calling him coach reminded him of his own mentors at SBP. "Rick Jacobs, Mike DiPiano, Mark Gerbino, Ivan Lamourt – they were my parents away from home," states Omar thoughtfully. He remembers, as a student, becoming family at The Hive everyone quickly and indiscriminately. "Coaches, teachers, other students, it didn't matter," he said.

He was comfortable at SBP – and it didn't hurt that his parents gave the school carte blanche in his discipline. "Father Ed was my biggest influence," laments Omar. For all his run-ins with the Headmaster, Omar credits the respect he had for Father Ed in bringing him to where he is today.

Leaving work one day, Omar ran into the club wrestling coach that had trained him as a child. They began talking, and one thing led to another. He told Omar he had started the club again, and the kids had a tournament that weekend. Omar decided to attend the tournament, which led to another tournament, which transitioned into helping at practices. This new journey snowballed from there. Omar is now one of the co-owners of Scorpions Wrestling School of New Jersey, ushering in the next generation of athletes.

Reflecting on his induction into the school's Hall of Fame with the third most wins in school history, Omar jokes, "I used to be the first!" His words of wisdom to today's Gray Bees? "Soak it all in. The adults are not your enemy. They have to be the most caring group of people out there." Omar recalls feeling loved by everyone, from the cafeteria staff to Mr. McKerry, teaching life lessons to students acting up in the hallway.

As an adult, Omar can see that no matter how many generations pass, SBP continues to bring in people who understand the school's mission and what St. Benedict's truly is. And he appreciates how difficult it can be to describe an experience that can only be understood by living it.