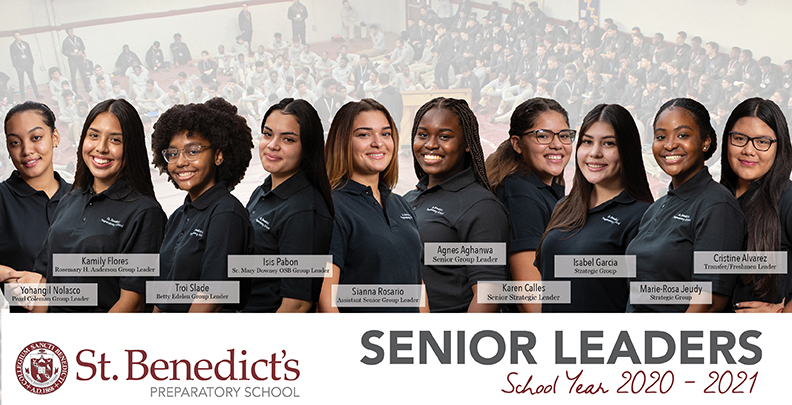 Back in the winter, before the pandemic was a reality, Benedictine Academy junior Agnes Aghanwa admitted to being defeated for “15 minutes exactly.” In February, 2020  after Benedictine Academy had announced it would close, the devastated students  began an intense effort to save their school. Agnes and other student leaders had been lobbying with the school’s administrators to keep Benedictine Academy open in any way possible, perhaps even by selling the building to St. Benedict’s Prep. But that last  rejection of all their plans felt like a defeat.

Fast forward to today. Aghanwa, a member of the Class of 2021 at the new Girls Prep Division of St. Benedict’s, is the Senior Group Leader of those young women, a position based on the leadership structure of the Boys Division, but also a work in progress. Referring to her old school, where she was a part of the student leadership team, as a “safe haven for girls,” she is committed to making sure that the Girls Prep Division here remains just that. “It is really important for girls to have a place of their own,” she said.

Now 77 young women do have that place at St. Benedict’s and 10 of them have been selected as leaders to create the structure that will support them now and into the future.

Dean of the Girls Prep Division Analisa Branco, the former Director of Admissions at Benedictine Academy, worked for months during the summer with Director of St. Benedict’s Vox Institute Glenn Cassidy, Ed.D. ’90, tailoring an orientation program and leadership training for the young women. Dr. Cassidy, who ran the Freshman Overnight for 20 years with significant veteran student participation, said this experience was different.

“All 77 students from all classes were part of the orientation; everybody was new,” he said.  “There were no upper classmen to take the lead.”

Branco and Dr. Cassidy led the Orientation classes where the new students learned the history of the school, the songs, and researched and ultimately selected women important in the history of St. Benedict’s whose names could be given to the multi-level student groups that are an integral part of the St. Benedict’s experience. Although this was all done virtually, 45 of the students did come to the property for in-person team building activities.

Dr. Cassidy and Ms. Branco also developed a Leadership class for the UD II’s (Juniors) and Seniors. In the Leadership class, Dr. Cassidy  said, “We used the Rule of St. Benedict to help build community – just the way we taught the freshman counselors in the Boys Division.”

Students were offered applications for the group leadership and senior leadership positions. Applicants were interviewed by the Girls Prep Division teachers who would make recommendations for the positions. Additionally, the Boys Prep and Girls Prep leadership applicants participated in workshops, both virtual and in person, with Victory Road, a leadership development organization led by retired Navy Seals. Leaders emerged as both the teacher recommendations and the Victory Road observations pointed to the same students. Branco praised the process, and the girls: “I was confident that the young ladies would work well together,” she said. “They communicated – they were like one unit.”

Dr. Cassidy, who knew many of the upperclassmen from Benedictine Academy, was particularly happy with the way all the girls were receptive to the orientation and leadership training, especially since a number of the students are from other schools. “They feel comfortable here,” he said. ”They wish they could be together [physically] but feel good about being part of the community.”

Because of their unique situation as pioneers of a new division of St. Benedict’s, the Girls Prep student leadership responsibilities are more complicated than those of the  Boys Prep leaders. Headmaster Fr. Edwin Leahy, O.S.B. ‘63  and Chief Advancement Officer Michael Fazio suggested adding another section of leadership. Seven students would be the Operational group, taking care of day to day school experiences and three would be the Strategic Group, working with the Admissions and Advancement Offices to promote the Girls Prep Division.

“They will  work to build and foster relationship as well as develop the division with its own tradition and legacy,” Branco said.

Karen Calles ’21, the Senior Strategic Leader, said they would be working on admissions and marketing, creating a foundation for the new division. She and Aghanwa have leadership experience from serving on the Benedictine Leadership Team and from working together with Branco to find a home for the displaced students of Benedictine Academy.

Although she is not from Benedictine Academy, Sianna Rosario’ 21, the Assistant Senior Group Leader, is hardly a stranger to St. Benedict’s. Her mother, Accounts Manager Danielle Assadourian,  works in the Business Office; and Rosario said she “was here more than I was at my old school.”

Rosario and Aghanwa agree that building community virtually will be their biggest challenge. They have been meeting twice weekly since they were selected to work on ways to continue to bring the girls together. “ I feel confident because of how well we have been coping,” Rosario said. “We will do well this year.”

Aghanwa and Calles feel the same way. Aghanwa, who  wants to be a child and adolescent psychiatrist, is committed to building a connection among the young women. “Fr. Ed gave us a lot of responsibility,” she said. “We haven’t lost energy. We will make this a success.”

Calles,  who wants to become a businesswoman, hopes that she and her colleagues will be taken seriously. She even hopes they can find a building for the Girls Prep Division. ”I know when women put their minds to something, it happens,”  she said. “We need to dream big.”