ST. BENEDICT’S JUNIOR TROI SLADE ON A STEM PANEL WITH A NUMBER OF ESTEEMED SCIENTISTS

Troi Slade is in the STEM Ambassadors Program that hosted a virtual Mars Base Camp Activity Program, which worked with NASA and the National 4-H, the largest youth development program in the United States. On Thursday, Oct. 1, Troi was a facilitator during a panel discussion with three scientists from the Mars Base Camp Activity program. Below is her story from “Meet the Scientists:”

On October 1st at 7:00 pm, the Mars Base Camp Scientist Panel began. Luckily, I had the opportunity to be on the actual panel as a question facilitator and introducer. I met three scientists, all of which were inquisitive, intelligent, charismatic, and most importantly, from my eyes, lovers of space!

Dr. Juliane Gross, a German native, who currently resides in Houston, Texas, is the Associate Professor in the Department of Earth and Planetary Science at Rutgers University. Dr. Gross is a NASA Early Career Fellow and the Deputy Curator for the Apollo Moon rocks at NASA in Houston. More than noteworthy, she is one of three women who were the first to open one of the last Apollo Moon rocks obtained in 1969.

Dr. Shaunna Morrison, who I had the pleasure of introducing, is a Research Scientist at the Carnegie Institution for Science: Earth and Planets Laboratory and co-investigator on the NASA Mars Science Laboratory Mission. Dr. Morrison had worked on the NASA Mars Curiosity Rover Mission and currently focuses her work on characterizing Earth's mineralogy through deep time with correlation to the planetary bodies. 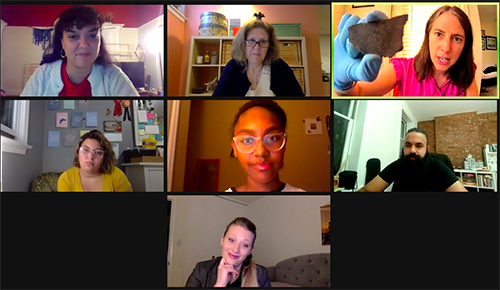 Last but certainly not least was Dr. Lujendra Ojha, Nepal native who currently resides in New York. Dr. Ojha is the Assistant Professor in the Department of Earth and Planetary Science at Rutgers University and the co-investigator on several NASA projects including HiRise (High-Resolution Imaging Science Experiment). Dr. Ojha is globally accredited for his undergraduate work on finding water on Mars.

My experience meeting the scientists and being on the actual panel taught me a lot. One: there are other kids and teens who, just like me, have an interest in space and our ability to locate new forms of life and study the unknown. Two: no matter where you're from or what your walk of life has been you can always find a community that fosters your interests and values your ideas. And if you're having trouble finding that, try looking home, at St. Benedict's Prep.