MISSION ACCOMPLISHED... AND THEN SOME
Forever Benedict’s surpasses goal to reach $108 million in historic campaign

At 8:45 p.m., the balloons dropped as students from the Elementary, Middle and Prep Divisions led more than 350 guests in a rousing rendition of Convo songs, including “Always Wanted Me a Hero” and “He Won’t Let Me Go.” There was a lot to celebrate at the St. Benedict’s Prep 2022 Annual Scholarship Gala presented by RWJ Barnabas Health and the Fournier Family Foundation on May 12. Forever Benedict’s, the largest, most ambitious and consequential fundraising campaign in the history of St. Benedicts, surpassed its $100 million goal, raising a total of $108 million to date.

“People looked at us as if were out of our minds and thought it was impossible,” said Headmaster Fr. Edwin D. Leahy, O.S.B. ’63, reminding attendees he’d stood in the exact spot in Dalton Gymnasium just a few years ago to launch the public phase of the campaign, which aimed to bolster the School’s Annual Fund and grow the endowment. “This evening, I’m back standing before you full of gratitude for all the teammates who have participated and to say, thank you. Thank you to all of you. Thank you to teammates around world. We did it. You did it.”

To date, Forever Benedict’s has garnered generous support from 10,500 donors — alumni, parents, faculty, staff, friends, corporations and foundations — all wanting to ensure that St. Benedict’s continues to serve students from in and around Newark, forever. Throughout the historic effort, 155 gifts of $100,000 were received, including 21 commitments of $1 million or more. 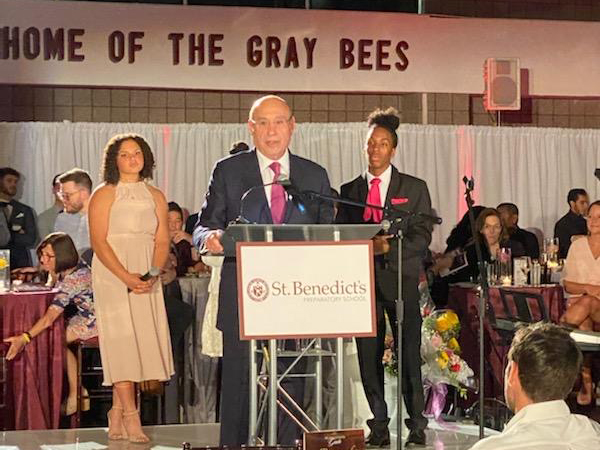 Each year, the Gala generates significant support for student financial aid and scholarships, while honoring and recognizing individuals who embody the Benedict’s mission and spirit. Emcees Rashaun Bertrand ’23 and Lucia Gallo ’24 kicked off the live fundraising portion of the program that raised $81,569 for scholarships in one hour, an incredible amount considering the target was to raise $27,000, or three $9,000 average financial aid awards. 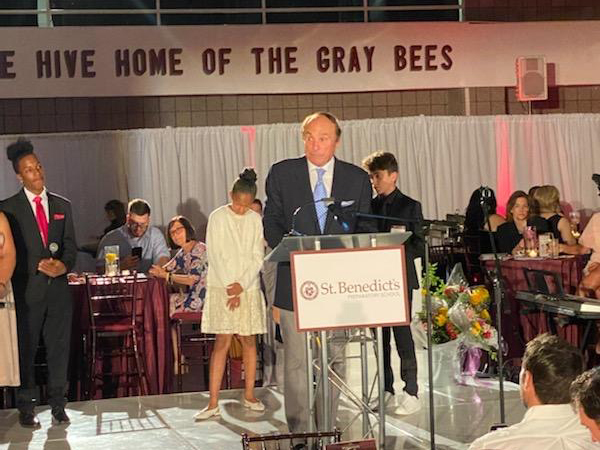 Second grader Lenin Perreaux and fourth grader Milan Matthews from the Elementary Division (pictured left) introduced Mr. Ostrowsky and thanked him for his leadership and contributions to St. Benedict’s and the community, especially throughout the COVID-19 pandemic. In his remarks, Mr. Ostrowsky illustrated how the missions of RWH Barnabas Health and St. Benedict’s are aligned: both strive to make communities better, stronger and healthier. “[St. Benedict’s] as far as I’m concerned is the very emblem of what so many of us need to commit ourselves to doing,” he stated, and to wild applause, announced a $1 million gift to Forever Benedict’s from RWJ Barnabas Health. The donation will provide direct support to the Steven M. Grossman Counseling Center, a model in school counseling that provides individual and group therapy to one-third of the student body. 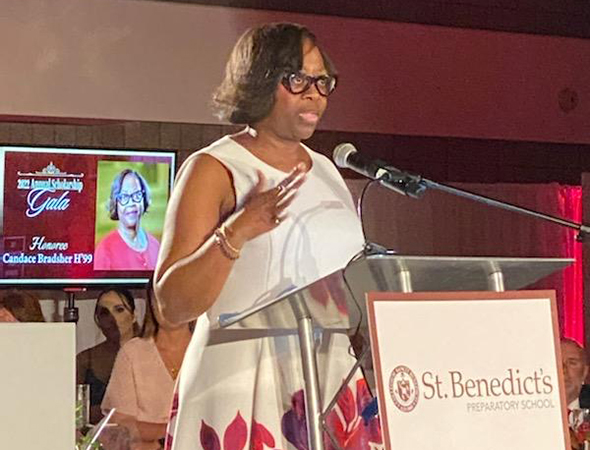 Jack Pontoriero ’25 introduced Mr. Del Mauro who has served as a Trustee for more than a decade and, as Chairman of the Advancement Committee, provided expertise and leadership that helped secure the $108 million for Forever Benedict’s thus far. “Barnabas and Benedict’s have been intertwined in my life for a very long time,” said Mr. Del Mauro, who was born and raised on Summer Avenue in Newark. He called both institutions, “True models for education and healthcare, not only for the State of New Jerseys but on a national basis,” that touch millions of lives and “continue to do so with great hope and promise for the future.”

After a heartfelt introduction from Troi Slade ’22, who will be attending Yale this fall, Ms. Bradsher drew a long and loud standing ovation for her 36 years of service to The Hive and Newark Abbey. She began her remarks by saying, “Amen. You’ve got me crying already.” She spoke about the people who influenced her life and thanked her mother, brother, Paul Thornton ’63, Abbot Melvin Valvano, O.S.B. ’56, and the many friends and alumni who came out to support her. “Thank you, God, and thank you all,” she stated. 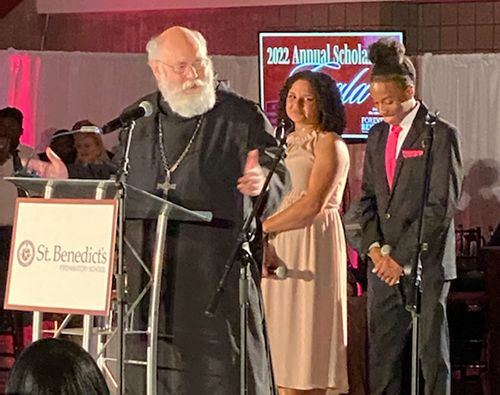 The historic fundraising achievement wasn’t the only news of the evening. Fr. Edwin introduced Fr. Augustine Curley, O.S.B. ’74 as the third-ever Abbot of Newark Abbey, elected earlier in the day by his confreres during the abbatial election.  Abbot Melvin Valvano, O.S.B. ’56 served the monastic community as Abbot for nearly 50 years.

The School also debuted the campaign video highlighting the progress of The Hive since Forever Benedict’s began. With the support of the campaign, St. Benedict’s was able to grow enrollment to 1,000 students for 2022-23, enrich academics, the arts and athletics, welcomed the Girls Prep Division and more. The final Forever Benedict’s numbers will be tallied when the 2021-22 giving year ends on June 30. Any gift made between now and June 30, will advance the campaign and the total amount raised. To make a gift, visit www.sbp.org/give. 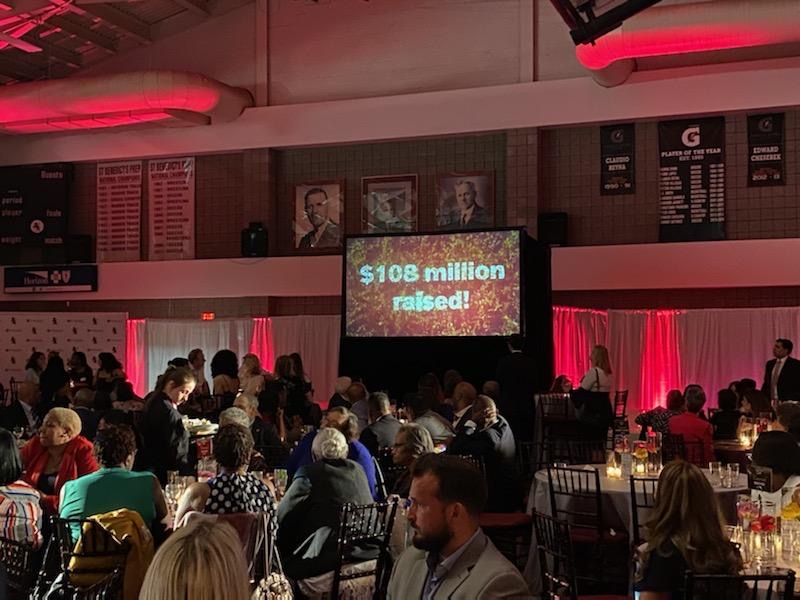