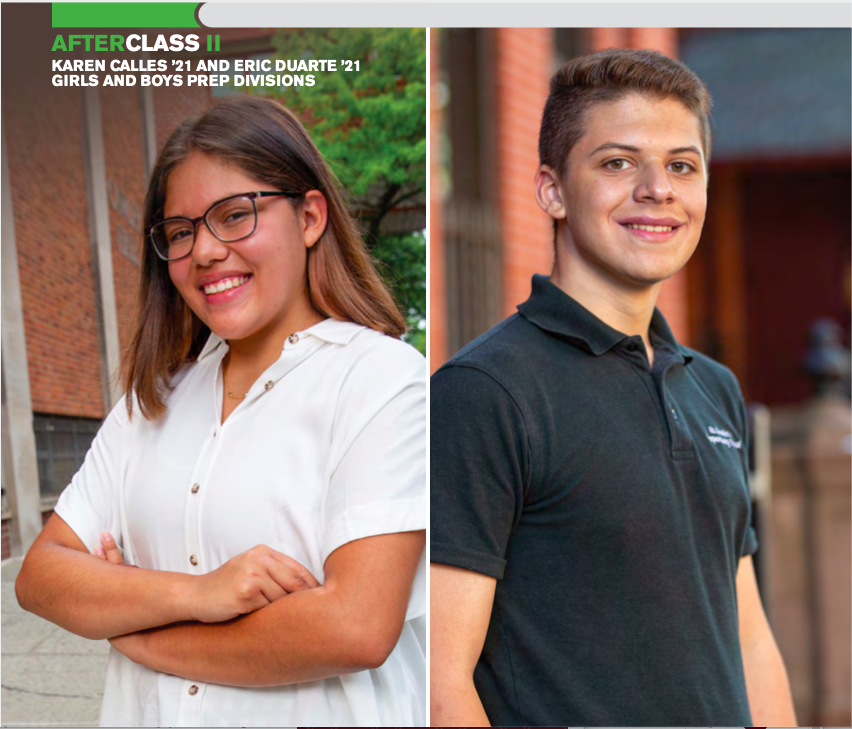 Three days into Summer Phase, Karen Calles '21 and Eric Duarte '21 shared their perspectives on the new Girls Prep Division at St. Benedict's Prep, that formed after the closure of Benedictine Academy (BA) in June.

Both seniors spoke about their hopes for the coming year. "I hope that we can get a good Group System in place," said Karen, who helped spearhead the new Girls Prep Division at St. Benedict's. Eric, has been a strong advocate for the Girls Prep Division; both his grandmother and sister are alumnae of BA. "Obviously, the girls can be just as powerful [as the boys]" he stated. "They may even perform better than we do."

St. Benedict’s Prep and Benedictine Academy (BA) were brother and sister schools for some time. How did student-leaders from the two schools work together before BA announced it would close?

Karen: The first major thing that we worked on together was BA’s Fall Fest last year. And our Benedictine Leadership Team (BLTs) worked with St. Benedict’s on their Black History Month event. But we always had a friendly dynamic. So, it was really easy for us to come to the boys for help when BA was going to close. They never made us feel like we were girls, they made us feel like we were people. It has been really easy for us to work with them throughout the years.

Eric: My grandma is an alumna of BA. My sister was accepted to BA when I was in 8th grade, too. I went to a few of their dances, Halloween events and stuff like that. I became Maroon Section leader the last day of school, so I wasn’t part of the conversations concerning the Girls Division, but I was very excited about it. It was about time that we had more involvement with our sister school. It was just so needed for a larger connection.

Was that excitement shared?

Eric: Amongst a few students sadly, there was the common thought that maybe the girls couldn’t lead as strongly as the guys could.

There’s that thought, ‘Are they really as powerful as we are?’ Obviously, the girls can be just as powerful. They are, and they will show you. They may even perform better than we do.

As committed as the BLTs were to continuing their Benedictine education at St. Benedict’s, was there any hesitancy or concerns?

Karen: The hesitancy came from the student body; it wasn’t really the girls leadership team. After we heard the school was closing,

I guess a lot of the girls had a hard time trusting. It’s definitely understandable. But for the BLTs, it was never really an issue. We just wanted to do it. It took a lot of nonstop recruiting in the middle of the pandemic to get the girls and their families to commit, but we got it done.

What are your hopes for your respective divisions or communities for the new academic year?

Eric: May I insist, it’s not separate communities. It’s one community.

Yes, thank you for the correction. One community. What are your hopes for your respective divisions then?

Karen: I just want to see everyone work well together. It’s going  to take a lot of adjusting, and I think there may be more adjusting from the boys than the girls. I hope everyone can adapt and adjust their thinking to where we’re  coming from, and to understand  the purpose of what we’re doing and continuing to do. I hope that everyone keeps an open mind.

Eric: I do hope more people will be able to see the true purpose — one community moving and merging into another one. We  want  the same goals, and a similar structure, it’s  all just happening  under different ceilings. Because we are really one community with different ceilings, except for when the whole community comes together, and we have Convo with the Elementary, Middle and  Prep divisions.

There’s been a lot of support for the new Girls Division, but also some skepticism. What do you want those who question the decision to know?

Karen: With everything that’s happening in the world right now, it’s even more important to understand that we lost our home. We looked for a new one and found it. We have been given a big voice at St. Benedict’s, perhaps more than at BA. So, now that we’re at a school where the students actually have a say, we now have a voice. Everything we’ve done is for the greater good. This wasn’t done to be selfish.

Eric: This is a different day. Alumni may be sensitive about what school traditions will look like in the future, which is understandable. But these are completely different divisions.

Traditions like the Freshman Overnight and The Trail, will still take place in the Boys Division. The Girls Division will have their own traditions. Maybe they’ll be similar to what the boys do. Maybe not. I’m so glad to see it. It’s a new, beautiful beginning that’s going to be so big.

Both of you are seniors. What would you like to accomplish this year for yourselves?

Karen: I hope that we can get a good Group System in place. We are going to have to be creative. For myself, I’ve had a lot of opportunities through St. Benedict’s. I was a fellow for The Vox Institute and now I’m a fellow for Teach for America. I’m glad I was able to have those two opportunities, and I get to put them on my college applications. I hope there’s more of that. After high school I want to pursue business.

Eric: It’s going to be a really hard school year, because we’re online right now. But I really want the girls to have as great a start to school as they can. I want them to have fun, too. St. Benedict’s is a fun place to be. I’m looking forward to the booths [in the cafeteria], it’s a privilege  that seniors have. You can sit on comfy seats during lunch, like the booths in a restaurant, only not the center one, that’s reserved for Fr. Ed. It doesn’t seem like comfy seats are such a privilege, but I can’t wait to sit in the booths. And I, of course, want a very successful senior year. I’m looking into the biological sciences for college. It’s my favorite subject.

Karen: I guess I’m just a little scared for all the responsibilities because there’s a lot of expectation and there are people expecting us to fail. It’s a lot of weight and it’s a lot of pressure, but I’m also excited. The way we’re going to earn our membership is going to be a lot faster than the boys do, because we can’t have leaders wearing gray polos. So, I guess I’m just trying to prepare myself because it’s only going to get harder from here.

Read this story and more in the St. Benedict's Summer Magazine.