You can read about the experiences of students and faculty on a Spring Phase course and civil rights road trip through the American South in St. Benedict's Prep Magazine. Here are some perspectives on the trip from Greg Thornton ’67 and Darius Stewart ’00, two alumni who hosted the traveling Gray Bees:

St. Benedict’s traditions come alive wherever Gray Bees converge. That certainly held true on the 18-day journey through Virginia, Alabama, Mississippi and Tennessee for the Spring Phase course, Insights from Newark: An Exploration of the American South and the History of Civil Rights Movements. Greg Thornton ’67 and his wife, Pat, and Darius Stewart ’00 graciously welcomed Gray Bees to their homes and introduced them to their respective communities.

The class, including nine students, Dean of Administration Mike Scanlan H’97 and Science Department Chair Dr. Dennis Lansang H’18, met up with the Thorntons in Montgomery, Ala. Thornton’s connection to St. Benedict’s Prep runs deep. His father, Edward ’39, was the first in the family to graduate from The Hive. Older brother Paul ’63 has devoted his entire career to St. Benedict’s, and younger brother David attended for one year before the School closed in 1973. 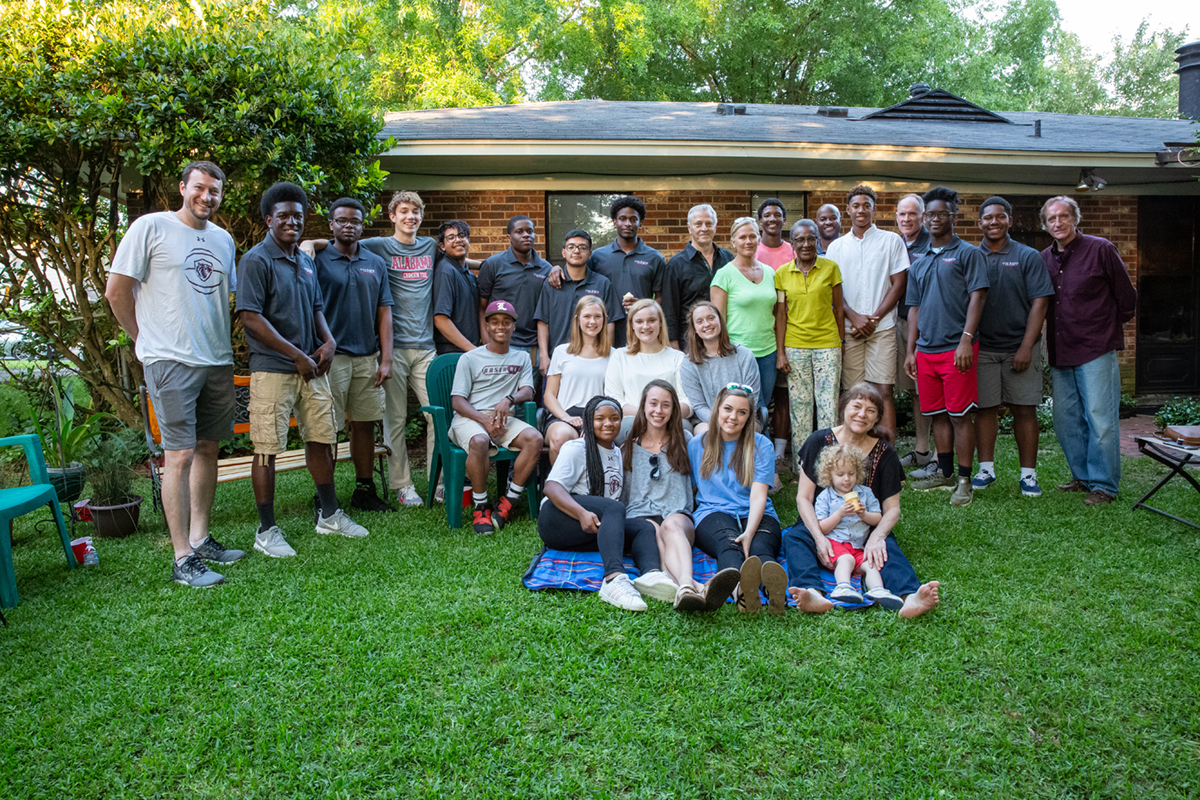 The Thorntons moved to Montgomery in 1988 after Greg, an actor, director and playwright, was invited to join the Alabama Shakespeare Festival. Hosting Gray Bees during their three-day Montgomery visit became a family affair.

Pat Thornton, who works at the Southern Poverty Law Center (SPLC) as a Senior Planned Giving Officer, led a personal tour of the civil rights organization’s offices. Greg Thornton accompanied the group on visits to the National Memorial for Peace and Justice and other historic sites. Greg and Pat held a barbecue at their home where students were introduced to Morris Dees, co-founder of the SPLC, Georgette Norman, retired Director of the Rosa Parks Museum, and Kalonji Gilchrist, President and Founder of 21 Dreams: Arts &Culture Collective. Pat and Greg’s son, Michael, a teacher at Loveless Academic Magnet Program
(LAMP) in Montgomery, brought a group of local high school students to meet with the Gray Bees.

Greg Thornton, who has spoken with Drama Guild students during his visits to New Jersey, said it was gratifying to connect with the students on the civil rights road trip. “It was a real gift,” he said. “I got to know them as people. They are incredibly impressive, every one of them. You forget how young they are.”

On the group’s stop in Memphis, Darius Stewart was also impressed by the students and the intensity of the Spring Phase course. “It was really great to see the spirit Benedict’s promotes — independent, open thinking and the ability to strive for more — continue to be carried on in these young men,” he said. “They were as much of an inspiration to me as I hope I was to them.” 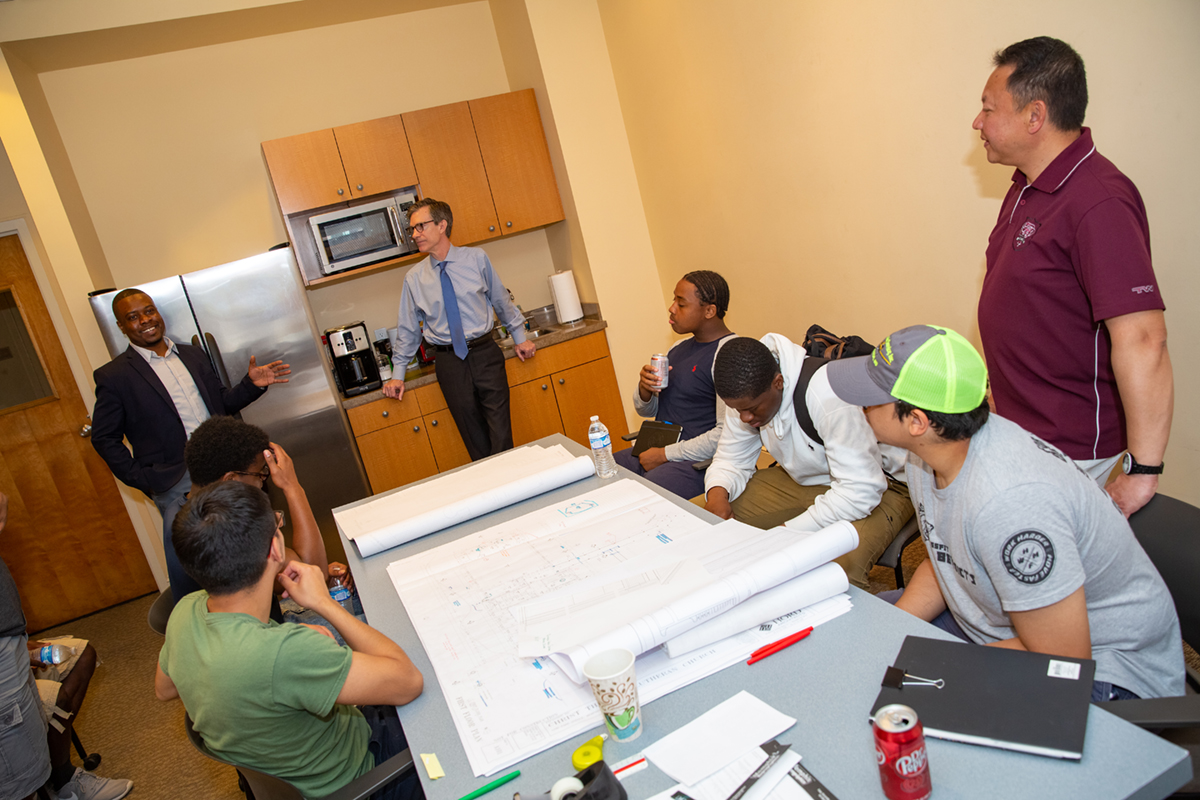 Stewart, an architectural designer, moved to Tennessee four years ago to join Hord Architects. As a St. Benedict’s student, he was on the fencing team, ran track, was a member of the Renaissance Corp., now known as the 520 Corporation, and interned at MBNA Corporation. He had planned to study international business in college until a Spring Phase course on architectural drafting with Fr. Maynard Nagengast, O.S.B. H’94 changed his mind.

“I enjoyed the class so much,” he recalled. “When I found out people got paid to do this for a living, I decided, I’m going to do this.”

Stewart earned a bachelor’s degree from the University of Notre Dame and a master’s degree from Georgia Tech. He worked in China for a year and was working in Atlanta when Hord Architects, which specializes in architecture for churches and nonprofit institutions, tapped him for his current position.

“Wherever I’ve worked or gone, I brag about Benedict’s all the time,” said Stewart, who gave the Gray Bees a tour of the firm and introduced them to its principal, Carter Hord. He also invited the group to dinner and enjoyed learning more about the students’ backgrounds and plans for the future. He said his hope for the students is that they make the most of their time at The Hive.

“It really is a special time,” said Stewart. “I’m so glad I got involved and did all the things I did at Benedict’s. It shaped me into the person I am today.”

Both Stewart and Thornton recognized the lasting impact courses like Newark: An Exploration of the American South and the History of Civil Rights Movements can have on students.

“It’s a lot for them to take in,” said Thornton. “What the trip meant to them will come out over time.”

“The experience they had on this trip is going to be life changing, the same as Fr. Maynard’s class was for me,” said Stewart. “My hat is off to Benedict’s for getting students more involved in things and to Mike and Dennis for creating the trip.”

The Summer 2019 issue of St. Benedict’s Prep Magazine will be in your mailboxes soon. Be sure to check out our cover story, “Raising Gray Bee Voices,” about the civil rights road trip and other initiatives that amplify Gray Bee voices.