It’s only fitting that on the 150th Anniversary of St. Benedict’s, the celebration was two-fold at Thursday evening’s Annual Scholarship Gala. 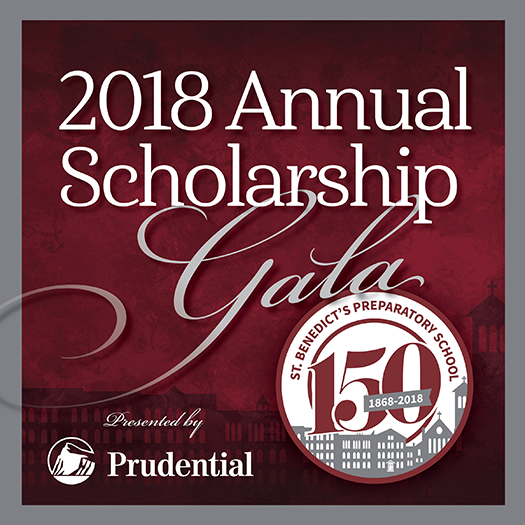 A trio of honorees was feted for their commitment to The Hive and the most ambitious campaign in School history was announced before a packed house during St. Benedict’s sesquicentennial celebration in Dalton Gymnasium.

“It’s great that we have you all here to celebrate with us our 150th year,” said St. Benedict’s Headmaster Fr. Edwin Leahy, O.S.B. '63. “We are looking forward to the next 150 years. We trust that those coming behind us will continue in the tradition that began in 1868.

“This is a large team that is required to help these kids grow up in difficult environs. We continue to rely on you and thank you. Pray for us.”

Nearly 350 guests were present to honor our own Dr. Ivan Lamourt ’82, along with staunch supporters of The Hive, Prudential Financial and Steven M. Grossman. The three honorees were presented with the Medal of St. Benedict’s, the School’s highest honor.

Dr. Lamourt, St. Benedict's Dean of Counseling Services, graduated from The Hive in 1982 and returned to his alma mater eight years later; and he has worn many hats during his tenure, including assistant headmaster.

But Dr. Lamourt’s biggest contribution has been spearheading the development of the St. Benedict's Counseling Center, which, today, is a comprehensive mental health services department that rivals any to be found even on major college campuses across the country. The department is at the forefront of applied school psychology and is a resource virtually nonexistent in other urban school settings. 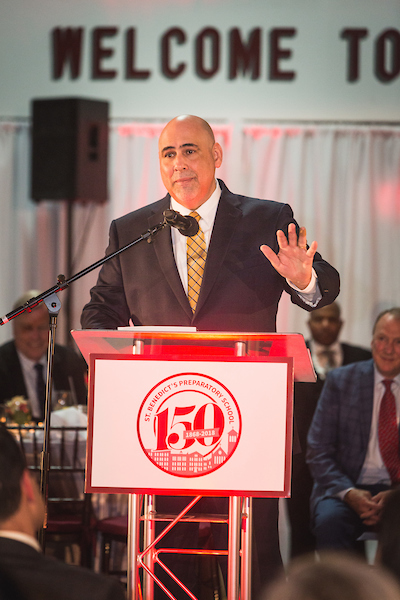 “The world needs more Gray Bees,” was an oft-repeated refrain throughout Dr. Lamourt's speech. “But make no mistake, it doesn’t happen without all of you and the sacrifices of those that came before us.

“I’ve been privileged to work with the young men of St. Benedict’s who display courage every day when they live in a world that tells them they don’t matter. These young men have the courage to face a world that is uncertain and, many times, unjust. These young men show courage in the face of extreme adversity and face that challenge by showing incredible love and compassion towards each other and the world.”

St. Benedict’s Counseling Center wouldn’t be possible without support from friends like the Grossman Family Foundation. Fr. Edwin announced during the Gala that the counseling center would now be named in the honor of Steven M. Grossman, whose Family Foundation has endowed a fund that supports the center along with the Backpacking Project, College Guidance, Leahy House and need-based financial aid for students.

Prudential Financial, whose main headquarters are based right here in Newark, has been loyal to The Hive and stood behind our students for decades. They were our first corporate donor when the school reopened in 1973.

“This is a tremendous honor for us, made particularly meaningful by the fact that we have an incredibly long-standing partnership with St. Benedict’s Prep,” said Lata N. Reddy, Senior Vice President of Diversity, Inclusion & Impact at Prudential Financial and Chair and President of The Prudential Foundation.  “We couldn’t be prouder of the partnership that we have with St. Benedict’s and look forward to the next 150 years.”

(View photos from the 2018 Scholarship Gala) 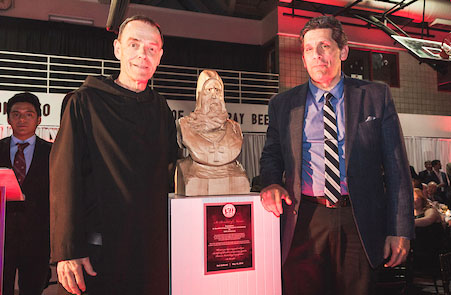 Along with the excitement of honoring our Medal of St. Benedict’s recipients during our sesquicentennial celebration, Fr. Edwin also announced Forever Benedict's: The Campaign for St. Benedict's Preparatory School.

"We have been working hard, but quietly, over the last few years, speaking to our closest alumni and friends," Fr. Ed stated. "But now we are ready to publicly announce the largest campaign in our history. With Forever Benedict's, we will raise $100 million, with $50 million dedicated to our Annual Fund to ensure our daily operations continue. The other $50 million will be earmarked to grow our endowment.  And, thanks to those who have already participated, I am pleased to report that we have surpassed more than $60 million in gifts and pledges from donors throughout the country."

"When you think about it, how does a private K-12 school in Newark serving students -- most of whom struggle to pay the cost of attendance – raise $60 million? Well, the St. Benedict's community always comes through,” said Fazio. "We could not be more blessed with a strong cadre of alumni and friends who believe in this mission. I have no doubt we will reach our $100 million target. It won't be easy. And we need everyone to participate. But we're going to do it. That's just how St. Benedict's works." 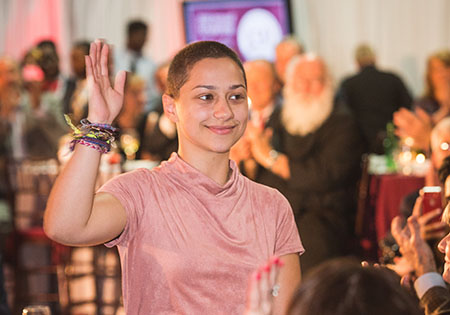 Another staple of the evening took place when Emma González was introduced to the crowd before a rousing ovation. González survived the attack on Stoneman Douglas High School shooting in Parkland, Fl. Soon after, she met Fr. Edwin and the two have stayed in touch since without any fanfare.

Yet another highlight of the evening came when Fr. Edwin and history teacher Rich Gallerani unveiled a wood carving bust of St. Benedict of Nursia. Gallerani, who has taught at The Hive for 16 years, spent more than 100 hours over nine months carving the statue from three blocks of Wisconsin Linden Wood. He gave the carving as a gift to the school to commemorate the 150th Anniversary.

Student emcees, seniors Carlos Acosta and Jerry Miraval, did a fine job playing off each other like seasoned broadcasters. Eighth-grader Troi Slade, junior Jake Napoli and senior Devionne Johnson were just as insightful and entertaining introducing each of the honorees.