ST. BENEDICT’S TAKES AN ALL-HANDS-ON-DECK APPROACH TO THE COVID-19 PANDEMIC
Led by Dr. Cassidy, The Hive was on the forefront of staying safe from the beginning

The day after Glenn Cassidy ‘90, Ed.D., the associate headmaster for leadership and community development at St. Benedict’s, arrived in the Netherlands with a group of students from The Hive on our annual exchange with Jac P. Thijsse College, Amsterdam confirmed its first case of COVID-19. That was late in February, and even then, fears of a pandemic were growing. Cassidy sensed then that we were all entering uncharted waters.

As soon as they returned home from the exchange visit on March 3, Dr. Cassidy got to work, assembling a small coronavirus team – a teacher, two administrators and the school nurse – to prepare for what was then an unknown eventuality. What was known was that school would be very different, very soon. As the administrator in charge of school safety, Cassidy had participated in a recent webinar on COVID preparations and that helped, he said. But the speed with which information and directives were changing  was head-spinning.

“We started by planning the way we plan when it snows – who should come in, who should stay home, how much can we all do?” he said. But the small team soon evolved into a larger administrative team and by the week of March 9, IT Director Dexter Lopina was canvassing all students and families about internet access and availability of devices. Michelle Tuorto H’16, Associate Headmaster for Academics, charged the curriculum committee to come up with plans for remote learning, and a faculty meeting to train teachers on the use of Google Meets was planned for March 13. By March 12, the team decided that persons who did not belong to the Benedict’s community would not be allowed on the property. The Drama Guild production, scheduled to open that evening, had to be cancelled.

“We had spent the past week and a half planning what we would do if we had to go remote,” Cassidy said. However, when the Archdiocese announced that all schools would be closed after Friday, March 13, “that decision actually made things easier for us.” In-person classes were over, foreign students in the Leahy House returned to their homes and the storied St. Benedict’s athletic teams disappeared from the gyms, fields and pool.

But on Monday, March 16, St. Benedict’s Prep was open for virtual learning in what was, in many respects, a seamless transition. ”It only happened,” Cassidy said, “because a lot of people were thinking, moving and recognizing what they had to do.”

Starting virtual school that Monday was just  the beginning of a reinvention that is still in progress. For the rest of the 2019-2020 academic year, two “think tanks” worked on plans for the term. One made up  of students and adult facilitators met twice a week. The other composed of teachers, administrators and staff met daily for a number of weeks before going to meetings twice a week. Questions like what would happen with Spring Phase and the Trail, the Overnight and Summer Phase, the senior awards dinner and graduation, and, of course, how instruction would continue had to be answered.

“Everything that happened in school planning is a result of the foundational work from these groups,” Tuorto said.

Cassidy said they saw how difficult it was to get kids “back on track after the two-week break for Easter in April. They decided that Summer Phase would begin in early July instead of August, lessening the time the students would be without contact with the school over the summer months.

Planning for Summer Phase – the time when the new freshmen participate in the ritual of the Overnight – was complicated eFven more by the entrance of 70 young women admitted to the new Girls Prep Division. Dean of Admissions Mario Gallo devised Zoom meetings so that the new students could get to know each other. “It worked brilliantly,” Cassidy said. Summer phase proceeded with small groups of freshmen, transfers and young women coming to the property at designated times; kids had to at least see each other and their teachers, if only briefly.

Clarity about what the Fall Term would look like evolved. Most students in the Elementary Division, led by Sr. Ann Marie Gass, S.S.J., are on the property at the request of their parents as are about 50 students from the Boys Prep, Girls Prep and Middle Division. These students needed  in-person classes for a variety of reasons; the boys are socially distanced in the cafeteria, and the girls in the library. Teachers are working from their own classrooms connecting with their students via video. The academic schedule resulted from endless hours of work by Tuorto, Middle Division Dean Jim Duffy H’16,  and Physics teacher Rich Molina’06.

Bringing anyone back to the property required intensive attention from the maintenance department, led by the Director of Facilities, Luis Ramos. Over the summer, Ramos upgraded the filters in all the HVAC units in classrooms to CDC recommended filters.  He also measured every classroom on the property, figuring out how many desks could safely fit in each and gathered PPE and sanitizing supplies. Ramos also contracted with a specialized cleaning company to nightly sanitize any room students had occupied that day.

Even the nurse’s office had to be addressed. Carol Hunter, R.N. had worked in a tiny office in the hallway near the cafeteria but there was barely room for one student in it – and certainly no room for socially distancing students or isolating  sick children. The nursing office has been moved to the Radel Building; the expanded space now has an office, a treatment room and isolation rooms. The counseling team members, who had occupied the space before, can now be found in various offices around the property. 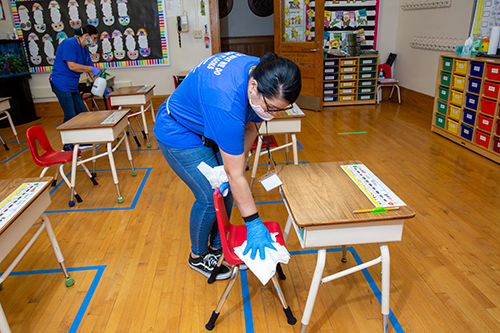 All these adjustments cost money. Tuorto procured $500,000 through the Federal Cares Act that has covered most of the purchases from air filters to facial temperature scanners at the entrances to the school.

Cassidy emphasized that the staff’s participation is on-going and training has been crucial. Both he and Jim Duffy have participated in dozens of webinars through the State of New Jersey and Johns Hopkins Bloomberg School of Public Health. The facilities staff and  Director of the 520 Corporation, David Rodriguez ’96, took part in the Global Biorisk Advisory Council’s training on infection and contamination control, which measures for infectious disease outbreaks. And all faculty and staff completed the American Red Cross Returning to Work course.

Thanks to the efforts of Dean of Freshmen, Math Department Chair and crew coach Craig White ’04 and Cassidy, every employee and student has to complete a COVID-19 Daily Check List before coming onto the property. The results are emailed almost instantaneously. Cassidy said the Health records management system, Magnus Health, will soon take this over allowing for a more streamlined collection of data.

It’s a lot. “The hardest part,” Cassidy said, “is that the work never stops. There is always something new to learn.” His training as a first responder and his years of service in that work has prepared him both intellectually and psychologically for the task at St. Benedict’s. He praises his colleagues –the administration, the IT Department, the facilities department,  the 520 Corporation, the food service; and he especially acknowledges the students and teachers.

“Altogether, this has been one of our finest hours,” Cassidy said. ”People thinking outside the box and making things happen – it’s Benedict’s at its best.”