St. Benedict’s students were invited by the Charles Hayden Foundation to take part in a private screening of the newest version of the Hayden Planetarium's space show, which is entitled “Worlds Beyond Earth” on Wednesday in New York City. 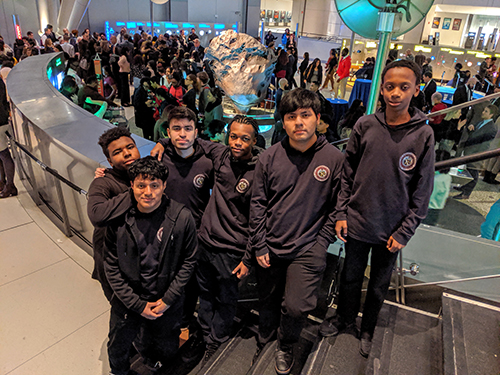 The Charles Hayden Foundation has been among St. Benedict’s most generous benefactors to our Scholarship Fund for nearly two decades. Wednesday’s screening at the planetarium was only for partner schools and organizations of the Foundation.

St. Benedict’s students who took part in the afterschool field trip into Manhattan were juniors Edgar Calva, Zahir Cenesca, Harrison Holloway, Jorge Iziureta, Alejandro Pimentel and Emory Rodrigues. Chair of The Hive’s Department of Science Dr. Dennis Lansang and Benedictine volunteer from the College of St. John’s (MN) Ryan Gall chaperoned the trip, which included a reception before the screening.

Cenesca managed to strike up a conversation with the Director of “Worlds Beyond Earth,” Carter Emmart, Director of Astrovisualization for the Planetarium, who described some of the techniques used to create the film.

Our students also got to meet celebrity Astrophysicist, Dr. Neil DeGrasse Tyson, the Director of the Hayden Planetarium, who delivered the introduction to the screening of the film, which is narrated by Academy Award winner Lupita Nyong’o.

“Worlds Beyond Earth” is dedicated to the memory of Charles Hayden in celebration of the 150th anniversary of his birth and made possible by the generous support of the Charles Hayden Foundation.