Share to FacebookShare to TwitterShare to LinkedInShare to PinterestShare to Email
From Ship to Shore: The US Navy Visits The Hive

From Ship to Shore: The US Navy Visits The Hive

The USS New Jersey (SSN 796) Commissioning Committee is preparing for the launch of their submarine and assisting the Navy and ship through the commissioning procedure and processes. "We are raising awareness that there is a submarine named after the state. It's a little piece of New Jersey that will be out there all over the world," said former submariner, Naval Academy graduate, and committee volunteer John Koehr.

The committee and several sailors have been visiting various schools, businesses, and organizations around the state. The group is working to link the vessel, crew, and people of New Jersey. St. Benedict's (SBP) was the seventh stop on their state tour. "The enthusiasm from the students [at St. Benedict's] and the interest in joining the Navy… I haven't seen that level of engagement anywhere else," expressed Committee Chairman Stephen Hutton. 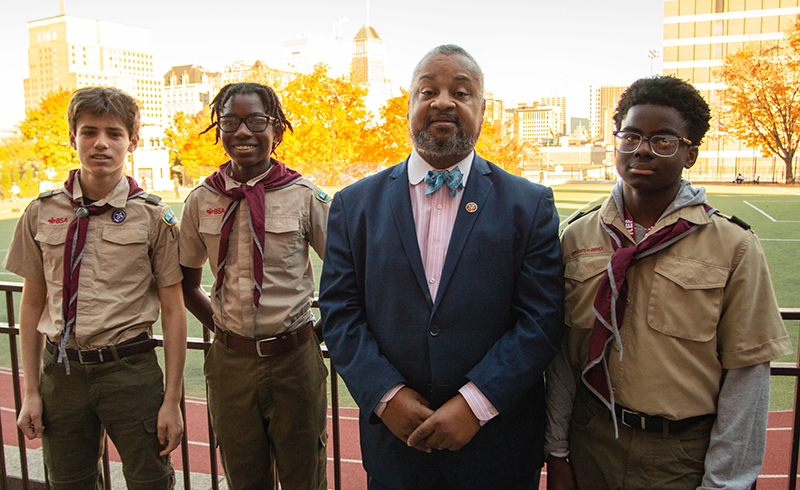 Among the participants at The Hive was Congressman Donald M. Payne Jr., who stopped by to pay his respects to the sailors and became an honorary member of the USS New Jersey. Congressman Payne urged our Gray Bees to be mindful of their education, emphasizing that they are the future of our state and country.

During their visit, the sailors participated in various activities with SBP students. Groups broke off into teams to complete multiple challenges, all championed by SBP Middle Division Latin teacher and Scoutmaster of Troop 1973, Daniel Kane '03. Sailors loosened their dress blues and rolled up their sleeves. Girls Prep, Boys Prep, and Middle Divisions held nothing back as they took part in wheelbarrow races, pushup challenges, and ship-to-shore games. Building camaraderie and community, students, faculty and sailors shared laughs and created lasting memories.

The most significant impact appeared to be on our SBP U.S. Naval Academy hopefuls. These students had the opportunity to understand the academy on a deeper level and ask questions about their professional ambitions in service from the crew members. "It made me think about what I want to do with my career after I go to the Naval Academy. A lot of people don't get to experience this. It was really unique," explained junior (UDII) Matthew Pedia. After the event, crowds of prospective Naval Academy students gathered around Lieutenant Commander Nicholas Tuuk to soak up any remaining advice and wisdom he could provide. 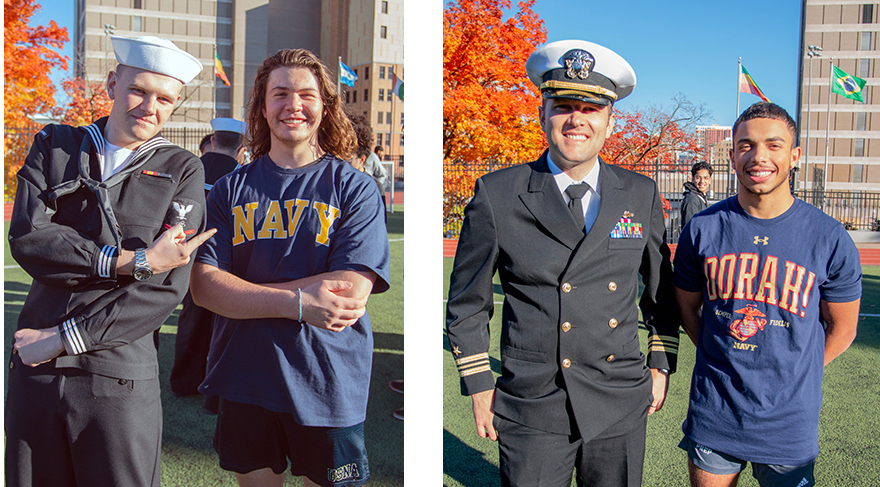 Senior Christian Chevrin described the event as inspiring, stating that E6 Hospital Corpsman and Independent Duty Corpsman Marc Alverez, AKA ‘Doc,’ was particularly encouraging. The visit reinforced Chevrin's tenacity in staying true to his goals. "If you have something you want to do, go after it," he stated.

Doc also had a lot to say about his experience with the students. "I learned a lot of things that are not visible anymore," said Alverez of SBP. When speaking about the SBP community, Alvarez voiced the need for more communities like The Hive, where people are willing to fight for each other and help each other. "You're really teaching kids that whatever you've got, you earn. I was really impressed with the model of the community here." He closed by emphasizing his respect for one of the school's mottos, "Never do for a student what they can do for themselves," stating, "Because, in the end, we're all in this together."

None of this would have been possible without the forethought of the SBP Scout Troop to include the whole community in activities with the corpsmen. "It was fun working with everyone as a team," shared SBP freshman and Scout Reilly Andre. Due to the nature of his family's work, Andre has been to many schools. He emphasized how SBP is his first school to afford these unique opportunities to students. "There is no community like the one at Benedict's," expressed Reilly with pride.

The USS New Jersey is the first attack submarine in her class designed and constructed to have a fully integrated male and female crew. Commissioning Committee Chairman Hutton states, "It expands the resource pool available and the talent that can be brought into the Navy." The namesake program will continue its pilgrimage throughout the state and hopes to launch by fall of 2023.