Thirty-five years ago, a 20-year-old Candace Bradsher was taking a business training course at Newark’s North Ward Center. Marie Caruso, secretary to the Center’s founder Steve Adubato, Sr., and mother of Anthony ’71 and Jim ’75, noticed her skills and suggested she apply for a job as an alumni office secretary at St. Benedict’s Prep.  Candace did and got the job. And on April 1, 1986, a journey began that called on her many strengths, including an eagerness to learn, genuine friendliness, a clear interest in the school, deep affection for the students and a respect for the monks, despite never having known Catholic clergymen. Paul Thornton ’63, who first hired Candace, said, “Over time, we saw other personal attributes that had incalculable value in our community – dedication, discretion and loyalty.” 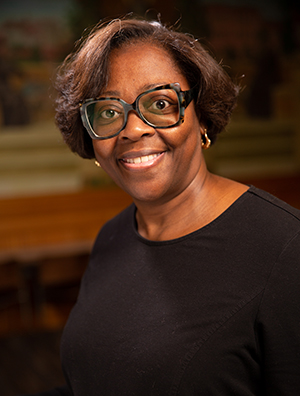 Born in Quantico, Virginia, Candace, now the Assistant to Abbot Melvin Valvano, O.S.B. ‘56, Annual Giving Officer and liaison to the Alumni Association, was raised in Paterson and moved to Orange in her sophomore year of high school. After two years at Glassboro State College (now Rowan University), she was concerned about finishing and decided to come home and get a job. The business training class at the North Ward Center was her next stop and her last formal education until, with Thornton’s encouragement, she returned to Rutgers-Newark at night eventually earning a B.A. in English with a minor in Gender and Women’s Studies.

Five years after she began work at St. Benedict’s, Candace moved to the Development Office where she worked as secretary to Thornton, then the Director of Development, and Abbot Melvin, President of St. Benedict’s.

“At some point,” she said, “the Abbot ‘stole’ me from Mr. Thornton and said I would be working for him exclusively.” She continues to assist the Abbot to this day, but the exclusivity part is far from true. Candace wears many, many hats.

The job she has held the longest – and one that she cherishes – is her work with the St. Benedict’s Alumni Association. Even though she relinquished some of her official capacities working with alumni when she became the Abbot’s secretary, she never totally left it behind her. And when Dean of College Placement Didier Jean-Baptiste ‘86 left his position as liaison between the Alumni Association Board and the school to go to law school, Thornton again called on her to take over that job. She had been working with class agents since she started at The Hive.

“Many have become like father figures, uncles, brothers and sons to me,” Candaces said. She does the alumni reunions, too adding, “You really get to know people doing reunions.” And the alumni keep in touch with her. “They know I love this place like they do.”

Both Thornton and the Abbot called on her to do everything from planning the early St. Benedict's annual fundraising dinners to food shopping for needy families to bailing people out of jail and more.

Working for the Abbot, Candace not only helped with his official correspondence and his pastoral and humanitarian care for whomever needed it, she also benefited from his generosity. After she got married in 1993 and bought a house in Orange, the Abbot showed up at her house unannounced with Stan Frankoski, a successful contractor who had done buildings and renovations for Benedict’s, to upgrade the electrical system and make other improvements.

“The Abbot was the project manager,” Candace said. She paid $25 a pay period to cover the work. Their relationship is enduring. Candace said, “He comes first!” And the Abbot said that her sheer competence has been a blessing for him. He added, “It is also healthy for a monk to have the friendship and devotion of an associate who can be like a daughter at appropriate times.” 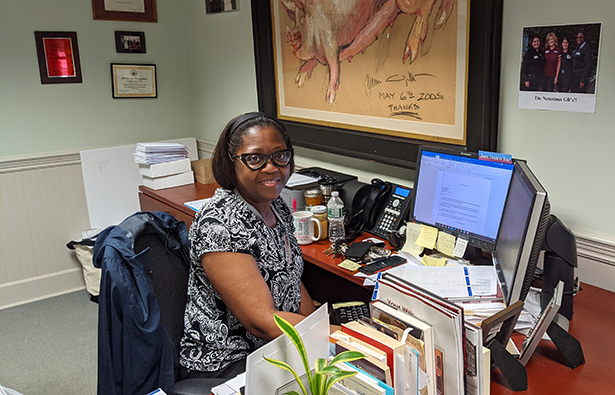 Her return to college was also facilitated by St. Benedict’s. Like Thornton, Board of Trustees President Emeritus Gene O’Hara ‘55 admired her drive and intelligence. He invited her to lunch one day in 2002 and said, “You are going back to college. We will pay for it.” At the time, O’Hara was chair of the Rutgers University Board of Governors. Going back to college, though something she had wanted to do, had seemed daunting and she was working full time. But she started back at Rutgers-Newark and, in 2014, graduated with a 3.47 GPA, the first in her immediate family to earn a college degree.

Most recently, Candace took on a teaching role after the sudden death of English teacher Bill Petrick. Teaching one section of freshman English was “the toughest job I have had in my 35 years here,” she said. Her sly sense of humor and inability to suffer fools – or unruly freshmen – emerged as she dealt firmly with kids who didn’t understand whom they were up against. She taught for nearly five months. Grateful for the opportunity, if only because she learned she was not cut out for the classroom, Candace acknowledged that “the Lord had pushed me away from teaching and now I know why.”

Always willing to share the power of her faith, a while ago, Fr. Mark Payne, O.S.B ’69 asked her to share reflections after the readings at convocation. “Her testifying is always penetrating, often powerful, Thornton said. “And sometimes personal in ways that can inspire courage in those confronting their own life challenges.” Candace said she is always aware that “you never know how you affect people.” Once a young student came up to her, and out of the blue, told her he missed her reflections.

Candace’s reliance on the Lord and her powerful faith is evident not only at St. Benedict’s, but in her ministry at her own church, Calvary Baptist in Morristown. She is co-chair of the New Members Ministry and in deacon training. When she is ordained a deacon she will look out for the spiritual welfare of an assigned group.

Candace loves caring for and serving others. “It’s in my DNA,” she said. A faithful church member and adviser, a valued team member, a former Girl Scout leader, a devoted daughter and sister, a loyal friend, Candace is beloved in the community.

Vernon June ’84, the former president of the Alumni Association, said her “unwavering kindness, loyalty and flexibility to the Alumni Association helps keep us moving forward.... [she has] a gift of giving and doing for others from her heart.” Phil Whyte ’83 spoke for many Gray Bees when he said, “Candace is my Sister.” Speaking at Convocation the last day of class before Easter Break, Headmaster Fr. Edwin Leahy, O.S.B. ’63 praised Candace’s many contributions to the school over the years. “We’d be in a lot of trouble without Candace!”

And the Abbot acknowledged the significance of her anniversary this year. “It is humorous and providential that Candace celebrates her anniversary of 35 years ago on April 1 AND Holy Thursday, which leads to Easter and the Resurrection of Jesus,” who, all who know her understand, is always at the center of Candace’s life.