Share to FacebookShare to TwitterShare to LinkedInShare to PinterestShare to Email
William H. Connolly Jr. H'91 – The Consummate Benedict's Man, to be inducted into SBP's Hall of Fame 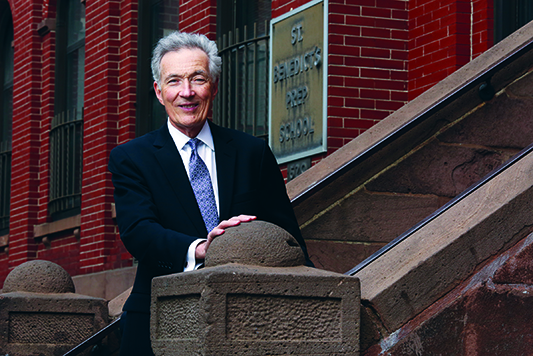 When William H. Connolly Sr. ’34 died suddenly in March, 1986, St. Benedict’s lost an early and loyal supporter and member of the first Advisory Board. His son, William H. Connolly Jr. H’91, was asked to replace him. The Advisory Board became a Board of Trustees, chaired by Gene O’Hara ‘55, and confidence grew that the reopened St. Benedict’s, now well over 10 years into its new life, would survive. St. Benedict’s more than survived, and Bill Connolly saw how the school progressed from serving fewer than 100 young men to nearly 900 students in 2020. Bill would serve 34 years on the Board, 13 of them as Chairman, the longest tenure as Chairman anyone has served.

Unlike his father, Bill didn’t go to St. Benedict’s. He attended St. Peter's Prep in Jersey City then graduated from Fairfield University in 1969; he served in the Army National Guard from 1967-1973. After college, he joined the insurance and risk management company started by his father and became President and CEO of William H. Connolly & Co. in 1983. When Bill later stepped up to replace his father on Benedict’s board, he became, as his friend, Headmaster Fr. Edwin Leahy O.S.B.’63 said, “The consummate Benedict’s man.”

What did that mean? Dean of Administration, Michael Scanlan H’97, who worked closely with Bill, said he had the ability to “bring his business experience to our operation, but at the same time not treat St. Benedict’s as a business.” Scanlan noted that during conversations when a decision had to be made, “Bill’s first question was always, ‘How will it affect the faculty and the students?’ He was always thinking about them.”

St. Benedict’s thrived during Bill’s tenure as Board Chairman. Enrollment grew, academics, athletics and key programs like College Placement and the Stephen M. Grossman Counseling Center were enhanced. Financial operations strengthened. Many years before the very successful Forever Benedict's campaign was launched, Bill persuaded then Director of Development, Paul Thornton ’63, to hold the first of the long-running St. Benedict’s Dinners, now the Annual Scholarship Gala. The dinner was, and remains, a success.

Bill’s personal charm and quick sense of humor contributed to his leadership capabilities. “Bill was not just a great leader of the Board of Trustees,” said Robert J. DiQuollo ‘65 who succeeded him as Board Chairman in July 2020, “but also a great friend to all of us. He never asked more than he was willing to do himself. I cannot think of any volunteer who put more time into St. Benedict’s than Bill.”

Register for St. Benedicts's 2022 Hall of Fame Dinner on November 30

But Bill would always share the credit. In a 2016 interview with NJBiz about the Board, Bill said, “Everybody who is on this board has passion, not for the board work, but for the place — for Father Ed, for the kids, for the institution that is St. Benedict’s.”

In addition to his service for St. Benedict’s, Bill was engaged personally and professionally with many community organizations. He was chairman of the UnitedHealthcare Foundation, served on the development committee of Caldwell University and was a trustee of Fairfield University. At Fairfield, he played rugby and co-founded the Essex Rugby Football Club in 1970; he coached and supported rugby clubs in the area and at Fairfield. He also supported numerous religious and non-profit organizations in the Montclair area. He never said no to a request for help.

Until his death in February 2021, Bill lived in Montclair with his wife Melinda. His daughter, Kristen, her husband, Stephen O’Reilly, and their two young children and his son, Jim, his wife Elyse, and their baby daughter also live in Montclair. His younger son, Will, lives in Brooklyn.

Bill also considered St. Benedict’s as family – especially Fr. Ed. The two became fast friends when Bill joined the board. “We just hit it off,” Fr. Ed said. At first, they met only at the Board meetings; but as time went on, they would get together for Saturday dinners, golf club lunches or Yankee games. “The older we got, the more time we spent together.”

The two had developed a routine of calling each other by the names of old, even forgotten baseball players. Bill had a book of baseball lore – names and stats – that he kept in his desk at work. “When I called him at the office, I never said it was Fr. Edwin – I always said I was some baseball player you never heard of,” Fr. Ed said. “When he called me back, he was some Yankee third baseman from 1950. I don’t think we ever used our regular names. We went on like this for years.”

Turning serious, Fr. Ed added, “I loved all our fooling around, but most importantly, I could always count on him to be the voice of moderation.” Bill knew how to take the middle road. And he never put himself front and center. “In anything he did, he was never central,” the Headmaster said. “He was always conscious of the number of people who relied on him. He was always about being of service.”