Ransford Gyan, a rising junior at St. Benedict’s, was named on Thursday as the Gatorade New Jersey Player of the Year for New Jersey for the 2021-2022 school year. 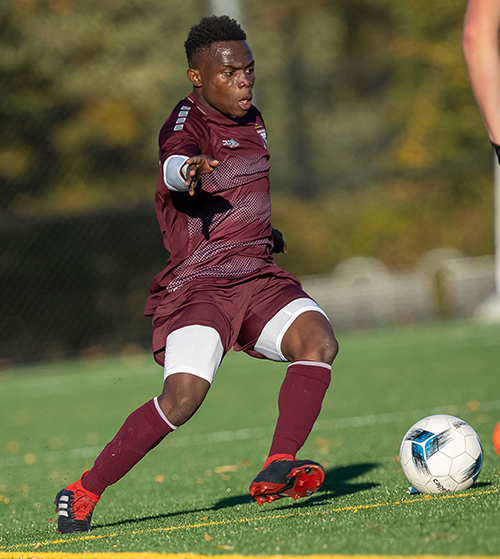 Gyan, a native of Ghana, helped St. Benedict’s compile a 13-0 record last fall in its fourth straight season without a loss. Coach Jim Wandling’s team, with Gyan back for his junior year, will open the 2022 season riding a 70-game unbeaten streak.

“Ransford Gyan is a special player! He is the type of player you don't take your eyes off of during a match because he is so much fun to watch,” said Wandling.  “Every time he gets the ball in the final third of the field you just get the sense that something special is about to happen. His ability to break people down with the ball at his feet and get to goal is unmatched at this level.”

The Gatorade Player of the Year Award, award, which recognizes not only outstanding athletic excellence, but also high standards of academic achievement and exemplary character demonstrated on and off the field, distinguishes Gyan as New Jersey’s best high school boys soccer player. He is now a finalist for the prestigious Gatorade National Boys Soccer Player of the Year award to be announced in June.

The diminutive Gyan, who is 5-4 and weighs 134 pounds, scored 16 goals and added 13 assists in just 13 games as an attacking midfielder for the No. 2 team in the country. He is the 12th Gray Bee athlete who has won the Gatorade Player of the Year Award, which includes the likes of Claudio Reyna, J.R. Smith, Tyler Ennis and Edward Cheserek. Reyna ’91, in soccer, and Cheserek ’13, in cross country, are the only two St. Benedict’s athletes to ever be lauded with Gatorade’s national award.

Gyan, who helped the Gray Bees win its 31st New Jersey State Prep Championship as a sophomore, came to The Hive as an eight-grader in 2019 and has been an excellent student in the classroom with a 3.70 GPA.

“Ransford is a guy that always puts his team first and gets more satisfaction seeing his teammates receive attention than being the focal point himself,” said Wandling. “Off the field, one of the most impressive traits that Ransford possesses is his humble nature given all the attention he gets when he is on the field. Quiet, soft spoken, and overly-caring for his teammates and friends.”