Share to FacebookShare to TwitterShare to LinkedInShare to PinterestShare to Email
Gray Bees Win Battle for National Supremacy against Cleveland's St. Ignatius. Read story and watch highlights from the game

In a battle of the nation’s heavyweights, second-ranked St. Benedict’s took down the country's No. 1 ranked team, St. Ignatius of Cleveland, by a 2-0 margin during a Saturday matinee before a lively crowd at Montclair State University.

The Gray Bees now have the country’s longest active unbeaten streak – extending it to 78 games – while preventing St. Ignatius of continuing its own run of 78 straight matches without a loss. Coach Jim Wandling’s team has now won twice and tied one match against the juggernaut from Ohio. 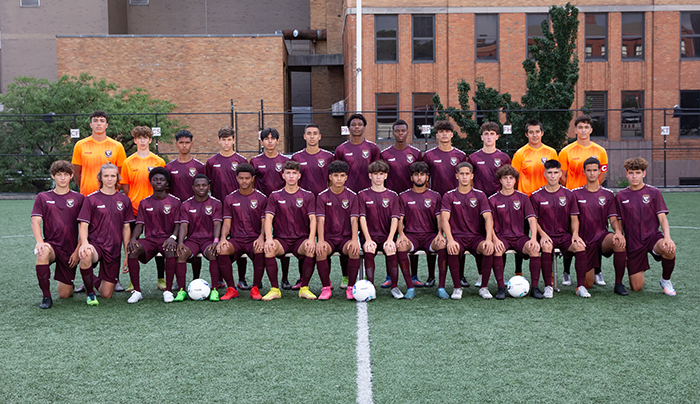 “This was the two best programs in the country going toe-to-toe for 80 minutes,” said Wandling. “For every bit of great soccer that we brought, St. Ignatius came with the same intensity and skill. Hats off to them because they really pushed our limits. But on a day like today, the team that wanted it more, came out on top. A great effort by both programs.”

St. Benedict’s relied on some timely scoring and great goalkeeping to remain perfect this season through eight games.

The Gray Bees opened the scoring in the 16th minute off a set piece. Martin Pulgarin served a corner kick to the near post where Yuvrajeer Nagra flicked on a header and the ball settled just inside the back post for his first goal of the season.

“We stress set pieces every day and I think our players get bored with the repetitiveness of it all,” admitted Wandling. “But we always tell them that they determine close matches and that was certainly was the case today.”

St.  Ignatius had its best chance for the equalizer with just over two minutes left in the opening half. The Wildcats’ Zsombor Onodi ran onto the ball after a long throw-in a blasted a shot on target from only eight yards out. St. Benedict’s goalkeeper, Marcilio Soares, was there to parry the shot with a quick reaction save and knocked the ball away.

Soares, who finished with 6 saves and has yet to give up a goal this season, made three more quality saves in the second half to help the Gray Bees maintain a one-goal cushion. The Gray Bees rewarded Soares’ play with the clinching goal with 7:12 left in the contest.

Christian Penaloza beat two defenders along the left end line and fed the ball on the ground to Ransford Gyan, who worked a give-and-go at the top of the box with Devon Rushmore. Gyan’s shot off the return pass squirted through two defenders and Kwaku Agyabeng raced onto the ball fire a shot off the goalkeeper and into the goal.

“The second goal was critical simply because it gave us some breathing room,” said Wandling, who, in his 12th season, owns a 207-8-4 record. “But this result wouldn’t have been possible without Soares. For us, he was the player of the match. We’ve been teasing him that he hasn’t had much to do, but today he stepped up big time in our biggest match of the year.”

St. Benedict’s still has a lot of work to do before it can lay claim to its 14th national championship, but this was a huge step.

“Anytime you can beat a team like St. Ignatius, it’s a quality win,” said Wandling. “But we haven’t won anything yet this year. We just have to stay focused and concentrate on every game at hand. But it’s nice to know we control our own destiny now.”