GRAY BEES CONTIUNE TO IMPROVE WITH EACH MEET THIS SEASON

The St. Benedict’s Prep swim team has been making progress all season.

But on Tuesday, in the State Prep Championships, the Gray Bees reached new heights in the pool at Lawrenceville. 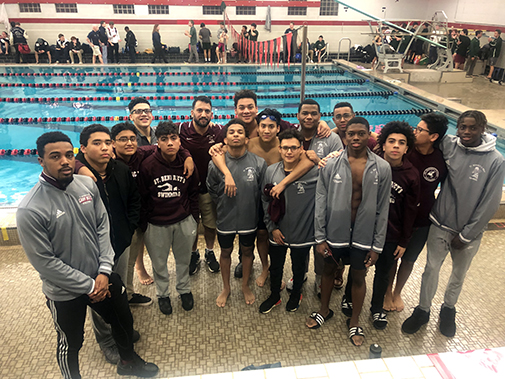 Coach Jose Cruz’ club saw his swimmers post personal best times in every race they entered.  That translated into a fourth-place effort in the team standings for SBP, which finished last in the Prep Championships a season ago.

“We have a tough group and have great leadership,” said Cruz. “We trusted each other and organized like a team and fought like a family.”

The leadership Cruz was referring to starts at the top where senior captains Aidan Davis, Anthony Cunas, Ammon Moore and Rafael Rios have been the backbone of the team all year. Those four combined to place sixth in the 200- and 400-yard freestyle relays.

Rios, Davis and Moore, were joined on the 200-yeard medley relay team by Elvis Vintimilla and placed seventh for the Gray Bees.

“During the pre-game huddle, I told the guys, don’t stop until you’re proud,” said Cruz, who swimmers this year posted their first winning dual meet record in five years. “At the end of the day, we were very proud.

“Our culture will hopefully continue to grow as we develop swimmers the coming seasons.”

The Gray Bees wrap up the season in the Eastern Prep School Championships on February 14-15 at Franklin & Marshall College in Lancaster, PA. SBP will be hosting the JV Championships this Saturday (Feb. 8) in the HAB Natatorium.