As the Gray Bees inch closer to the National Prep Championships, coach Frank DiPiano likes what he has seen from his wrestlers each and every week. 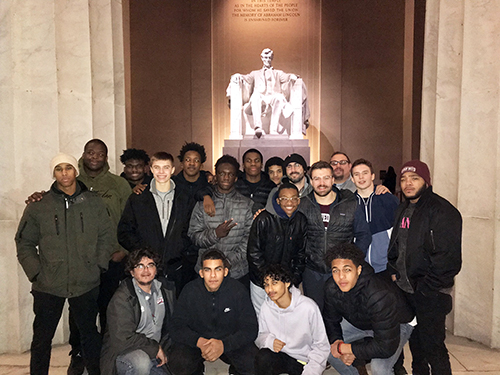 “The kids have stuck to the process and are starting to peak at the right time,” said DiPiano. “The ultimate goal is the prep national tournament and being ready to have the best tournament they can have on that weekend.”

This weekend was a case in point. Every Gray Bee wrestler scored points for the team and 11 of the 14 individuals placed in the Melee on the Metro in Washington, D.C.

“We are seeing production from young guys and some guys who haven't had all that much success,” explained DiPiano. “This just shows that we are progressing.”

Placing third for DiPiano’s club were Tom Fierro (132 pounds), Ibrahim Mendheim (160) and Cesar Espinal (220). Mendheim suffered a loss in the semifinals after being called for a questionable slam. Otherwise, SBP would have challenged for the overall team championship.

DiPiano and his assistants also made time for the team to enjoy some of the famous landmarks in the nation’s capital.

“We got to see some sights and competed hard and really did things that SBP wrestling has always been about,” said DiPiano, who is in his first year leading the Gray Bee program. “This year has truly been a return to tradition. But that all doesn't matter if we are not ready to compete come February 21st when that first whistle blows to start the first round of prep nationals at Lehigh.”

The Gray Bee track team took part in the famous Millrose Games at the New York City Armory on Saturday and received a pair of third-place performances in the relays.

(View photos of the Gray Bees competing in the Millrose Games)

St. Benedict’s 4x400-meter relay team, which consisted of Malique Jackson, Justis Worrell, Saveyon Blake and Malachi Little placed third with time of 3:23.07. The same four runners managed the same result in the 4x200-meter relay by crossing the finish line in 1:30.23.