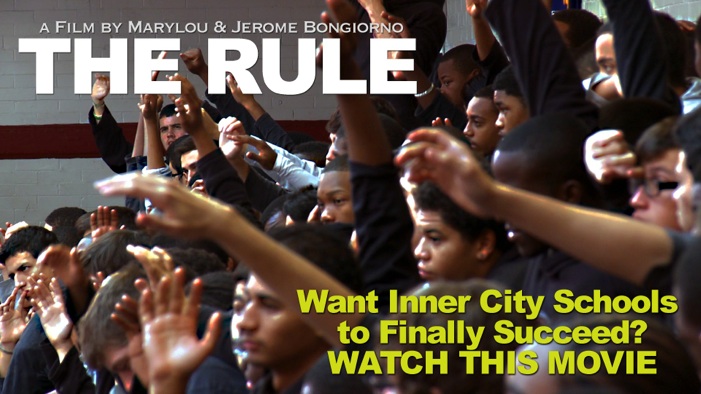 The Rule Goes to Washington, D.C.: The White House Initiative on Educational Excellence for African Americans Film Screening and Discussion Series presented The Rule on Monday, Feb. 8, 2016. The documentary on St. Benedict's Prep was featured at The United States Department of Education (LBJ Building). Fr. Edwin, Didier Jean-Baptiste and St. Benedict's Senior Group Leader, Bruce Davis, and former SGL Jared Boone '13 were on hand for the viewing and dicussion afterwards (View photos and watch video of the day's events).

Screenings for The Rule in New York and in Encino, CA., generated a host of positive reviews. A well-attended New York reception in connection with the film was followed by an equally large turnout at a special Princeton screening. James Degnan ‘64 and Walter Krieg ‘62 played an important part of the Princeton event. Two smaller but enthusiastic gatherings occurred on the West Coast, the last of which was hosted by Dr. Dennis Costello ‘64 and his wife, Linda, in Solana Beach.

Filmmakers, Marylou and Jerome Bongiorno, have been invited to screen “The Rule” at the Annual Fall Conference of the University of Notre Dame Center for Ethics and Culture. It will be screened at the Browning Theater there on Thursday, October 30, and will be shown at other times throughout the colloquium.

Haven’t seen “The Rule?” Details on purchasing the DVD can be found by clicking here.